“Mr. Tango has, uh, spoken very eloquently. I wish I could be as forgiving. But I can’t, because… this whole thing… f***ing sucks! I mean, this is the biggest pile of s*** I’ve ever..” ~ Kurt Russell, Tango & Cash Our resistance to calling Novelists by their new legally imposed moniker Novelists FR remains firmly
Read More

A new vocalist in former Alazka man Tobias Rische seems to have reinvigorated French DJentlemen Novelists as with their surprise second heavy single “Terrorist” echoed their original sound. Guitarist Florestan Durand have taken a minute to record and tab a guitar playthrough video for the song with a Vonstein Nova 6 in CGCFAD with D’addario
Read More

Whether they were unhappy with the reception of their last album “C’est La Vie” remains unknown but French DJentlemen Novelists have seemingly reinvented their sound and with heavy New single “Terrorist” echoed that of their older material with a flawlessly juicy solo in the mix. It follows “Lost Cause“, a cut that had a similarly
Read More

Our refusal to call Novelists by their legally enforced name “Novelists FR” probably has us in contempt of court but… you only live once. At the end of November, the band announced their signing to new label Out of Line music alongside the release of a brand new single entitled “Lost Cause”. The new song
Read More

French Progressive Metallers Novelists have shared an alternative version of “After The Rain” in lyric video form. Having been forced to rebrand “Novelists FR” for their third album following a legal issue they then re-issued “C’est La Vie” as they weren’t happy with the final mix. After their tour plans went up in smoke, Landmvrks
Read More

What’s the weirdest cover song a band could whip out? Well… Novelists guitarist Flo Durand has taken the cake by dropping a cover of a song from Japanese virtual K-pop girl group K/DA! They feature in a program called League of Legends. To be fair they’re calling the cover a remix of “Pop/Stars” and if
Read More 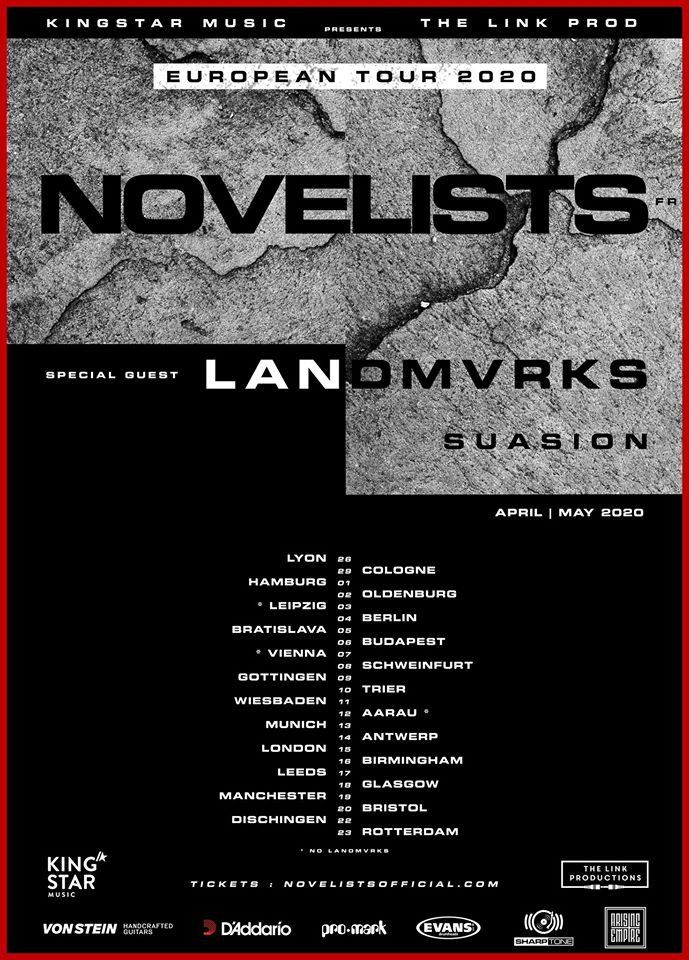 Having been forced to change their name and add “FR” so far into their career must have come as a hardship but it hasn’t stopped Frenchmen Novelists from landing a solid third studio album in “C’est La Vie” via SharpTone Records. They’ve announced a huge European tour trek starting in Lyon at the end of
Read More

Normally during the phase prior to an album release you get staggered tracks or playthroughs or interview and making of snippets. Arising Empire have surprised in dropping a trio of separate parts spliced from an interview with Novelists about their third album “C’est La Vie” which came out last week, on the same day…
Read More