Filmed at Amplified in Dallas Texas on 24th September, here’s “Wolf Amongst Ravens” cut from the set of After The Burial, the closing chapter of the bands 2013 album “Wolves Within“. The eight string barrage from the Technical Metalcore outfit continues to astound and as the band join The Black Dahlia Murder, Carnifex and Rivers
Read More

After The Burial had their “Behold The Crown” European tour trek with Spiritbox, Polar and Make Them Suffer cut short with each of the bands making a mad dash home for lockdown. Bassist Adrian Oropeza can be seen doing what we all are and removing his PPE for a playthrough for “Bezerker“, while the band
Read More

The ongoing “Behold The Crowd Tour” that sees After The Burial take Make Them Suffer, Polar and for the first time Spirit Box across Europe to play cuts from their absolutely astonishing album “Evergreen” has given rise to “Anti-Pattern“, “Bezerker” and “Behold The Crown” all being caught on camera at Nová Chmelnice, in Prague, Czech
Read More

Tickets go on sale on Thursday 28th November for the “Behold The Crown” Tour which will will see After The Burial will headlining in support of their brilliant “Evergreen” album with Australian’s Make Them Suffer, Polar and Spiritbox also on the bill… 13th Bristol, Exchange 14th Glasgow, Cathouse 15th Leeds, Key Club 16th Manchester, Rebellion 17th Birmingham,
Read More

A contender for our top five albums of 2019 has to be the brilliant “Evergreen” from After The Burial. Perhaps not a band we’d have expected to join As I Lay Dying on the Shaped By Fire Tour, here are “Lost In Static”, “In Flux”, “Exit, Exist” and the brilliant “Behold The Crown” filmed at
Read More

Usually reserving herself for Deathcore, Misstiq has recorded a dark and moody re-imagined version of “Lost In The Static” by After The Burial! Her work is timely with the DJent infused Metalcore crew heading over to Europe for a run of shows in August with From Sorrow To Serenity and Ghost Iris joining them on the
Read More

After The Burial lead guitarist Trent Hafdahl joined Gear Gods to review a trio of guitar pedals from in a random free for all. They’ll be upon our shores in August with From Sorrow To Serenity and Ghost Iris in support of new album “Evergreen”.
Read More 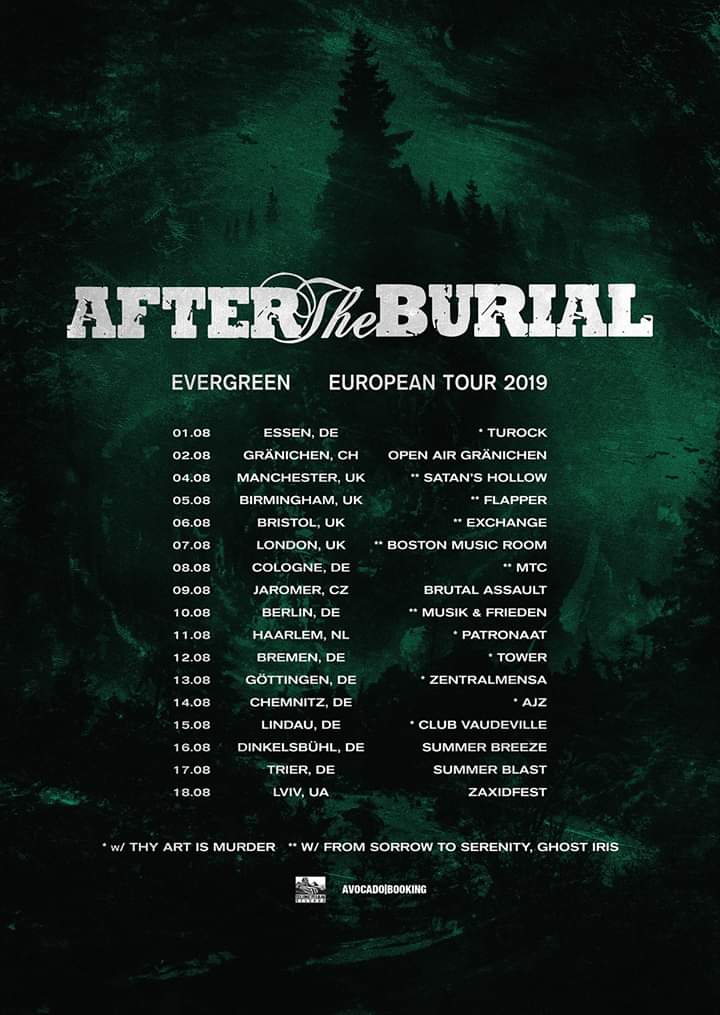 Twin Cities Minnesota Progressive DJentlemen After The Burial have announced a quartet of UK shows around a European Festival run in August! They will be joined by our very own From Sorrow To Serenity and Ghost Iris for the shows while playing tracks from their stunningly good new album “Evergreen”. That album is so good
Read More

Their sixth studio album in 13 years, “Evergreen” marks the band’s first release with the bassist Adrian Oropeza. He replaced original bassist Lerichard “Lee” Foral in 2016 and was named the bands full time bassist having toured with After The Burial for 12 months of the “Dig Deep” album cycle. A progressive metalcore band from
Read More