As “Everything You Ever Wanted To Know About Silence” by Glassjaw reaches it’s 21st Anniversary having been recorded at Indigo Ranch in Malibu California with Ross Robinson (KoRn, Slipknot, Limp Bizkit), it’s time we tipped our hats to the band and especially the axis of vocalist Daryl Palumbo and guitarist Justin Beck for effectively birthing
Read More

How many more Glassjaw bootlegs are out there? It seems like just when we’ve reached our limit one more surfaces from the archives of ancient history. This one was filmed by Javier Vanhuss at the Coors Amphitheatre in Chula Vista California on 10th July 2003 and sees the New York Post-Hardcore mob on the tour
Read More

Another day, another dollar, another Glassjaw bootleg? We can’t go to a live show so why not? 4th May 2002 at Armory High in Syracuse New York is where this one was shot, which was after some secret sessions with Ross Robinson to record their sophomore album “Worship And Tribute“. How do you follow up
Read More

Another “Everything You Ever Wanted To Know About Silence” era full set from Glassjaw has surfaced, once again filmed by Danelle Dombrowski. This time out it was captured at Hanover House in Meriden Connecticit on 10th February 2001. The seminal Post-Hardcore album itself reached that 20th Anniversary milestone last year however guitarist Justin Beck wants
Read More

Back in 1999, Post-Hardcore crew Glassjaw who were a major part of the Long Island New York scene and recorded the colossal “Everything You Ever Wanted To Know About Silence” with Ross Robinson (KoRn, Limp Bizkit, Slipknot). Here’s a full set from the band at Brownies in New York on 1st January 2001, filmed by
Read More

Rewinding the clock back nineteen years to 21st November 2001 and the Birch Hill Nite Club in Old Bridge, New Jersey, here’s a full set from Long Island New York Post Hardcore homewreckers Glassjaw. It might include the first time that the band performed “Tip Your Bartender” live, with the bands Ross Robinson (Limp Bizkit,
Read More

It only seems like yesterday that “Material Control” from Glassjaw landed on our doormat and amazingly 3 years have gone by. Time flies. Courtesy of liberated tape archive, here’s a full set from the band performing their “Kiss Kiss Bang Bang” EP in full back in 2001 at the Unitarian Church in Manhasset, New York.
Read More

Including “Tip Your Bartender”, “Siberian Kiss” & “Ape Dos Mil”, here’s a Pro-Shot full set from Glassjaw at Pukkelpop Festival in Hasselt Belgium yesterday. The post-hardcore crew will be upon our shores today for a one off headlining show at London’s Brixton Academy. If you haven’t already, check out our review and recent album “Material
Read More 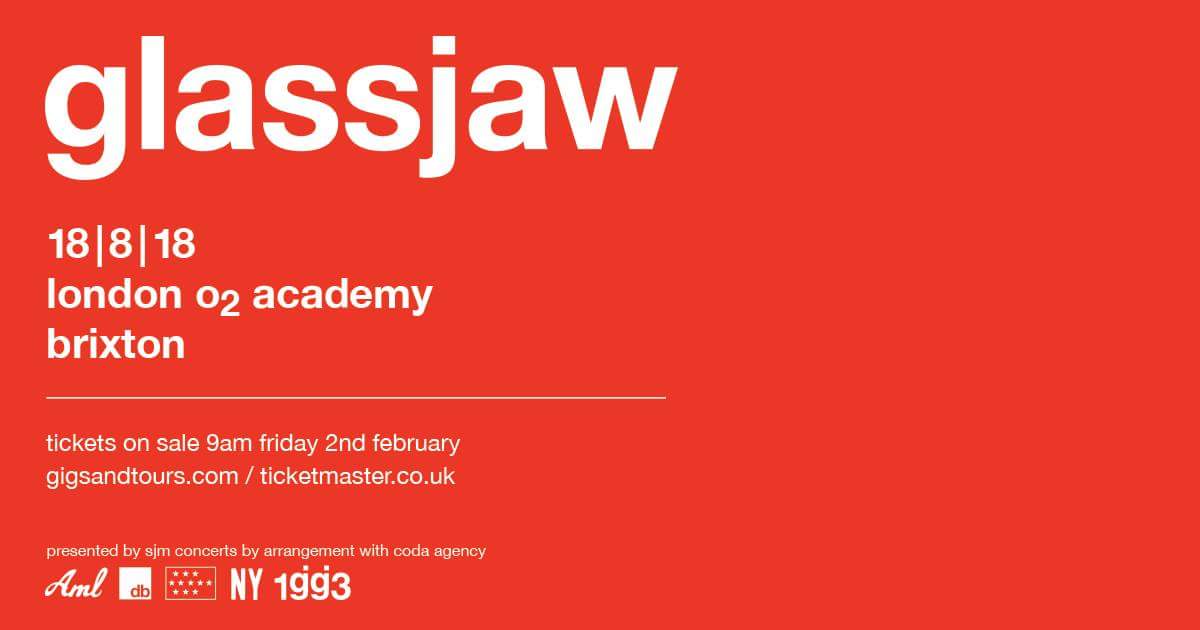