Back at the Lounge Bar in Alton Hampshire and night of Hardcore awaits in the October darkness, the tone set by the sound engineer putting on some mood music in the form of Knocked Loose after the sound check that is pretty much on point as it reverberates around the small yet perfectly formed venue. The light show is minimal but this is DIY, grass roots Metal and the bands are sharing a backline kit so who cares? As long as there is beer and riffs, nothing else matters.

First on the bill are Aggro [7/10] who open their set with “Ruins” and despite the feedback nightmare of their sound check are a tight, well oiled machine that remind of the Jesse Leech project Seamless with Dan Gallop bringing the unclean bark and lead guitarist Phil Williams singing. If we had to pick a sub-genre to pin on the quintet then Melodic Metalcore would probably be the one but there is so much to them that it probably doesn’t do them justice. “No F***s Given” has a rap scream, funky uncleans and a phat bass sound that is classic 90’s pre Nu-Metal and that continues into “Stalemate” as the band mix it up in a fun way, like “Pork Chop Sandwich” era Dry Kill Logic. The whole of their 2020 EP “The Shift Of Balance” is the set tonight and there is plenty of evidence that it would have got a hell of a lot more traction had it not dropped a couple of months before the World got locked down.  Closing their set with two brand new tracks including “Taking A Stand” is the violent plot twist of a cheap thriller but while no other band on the planet would do it, both are killer.

Next up are Kaine [7/10] who have travelled from Essex and are a bit late so don’t have time for a proper soundcheck but do have a five string bass that Isaac Healy makes the best use of. As a band, they look like they should be playing Thrash, wearing sleeveless t-shirts and denim jackets with back patches but actually sound more like a beafed up classic Metal act from of the 80s with Iron Maiden vibes, a heavier interpretation of what The Raven Age are currently doing. Their set highlight is “Slave To The Grind” which has some sumptuous lead parts from a band who have a love for longer instrumental passages that allow them to show off their talents, while “Reforge the Steel” needs to be heard to be believed. They’re working on album number five and in all honesty this venue doesn’t seem big enough for them.

Despite only forming in 2020 Helestios [7/10] have an album in “Your Pain Tastes Good” doing the rounds. They have a six foot plus vocalist and guitarist who looks like a Norse God and puts in a wrath fuelled performance for a set of pure unadulterated Death Metal and is backed by a powerhouse rhythm section and virtuoso lead guitarist. “Black Storm” and “Downgraded World” are both huge, loaded with pile driving rhythms and even though there are a few mute moments where the melodic intros seem out of tune or time, it’s still a masterful display. The ethnic vibes of “Return To Baalbek” serve to add fuel to the fire and when their bassist forms a one man circle pit thanks to a wireless pack, it’s hilariously good fun.

Sore Teeth [7/10] have been a Hardcore band with crossover Thrash leanings that have been getting slowly but steadily heavier with each passing release and their DIY work ethic has seen them drop plenty of tunes. By their own admission they didn’t expect to be playing any shows in 2021 and are working on a new album, despite dropping a new EP “This Is Our Core” at the end of July. But as much as they claim to have lost it, they still have it in abundance, even if their usual jokes and stage banter is somewhat lacking tonight. “Salvation” and “With My Fist” both provide instant gratification while the title track of the new EP goes down a storm. If they were from Brooklyn New York then they would no doubt have a bigger audience. 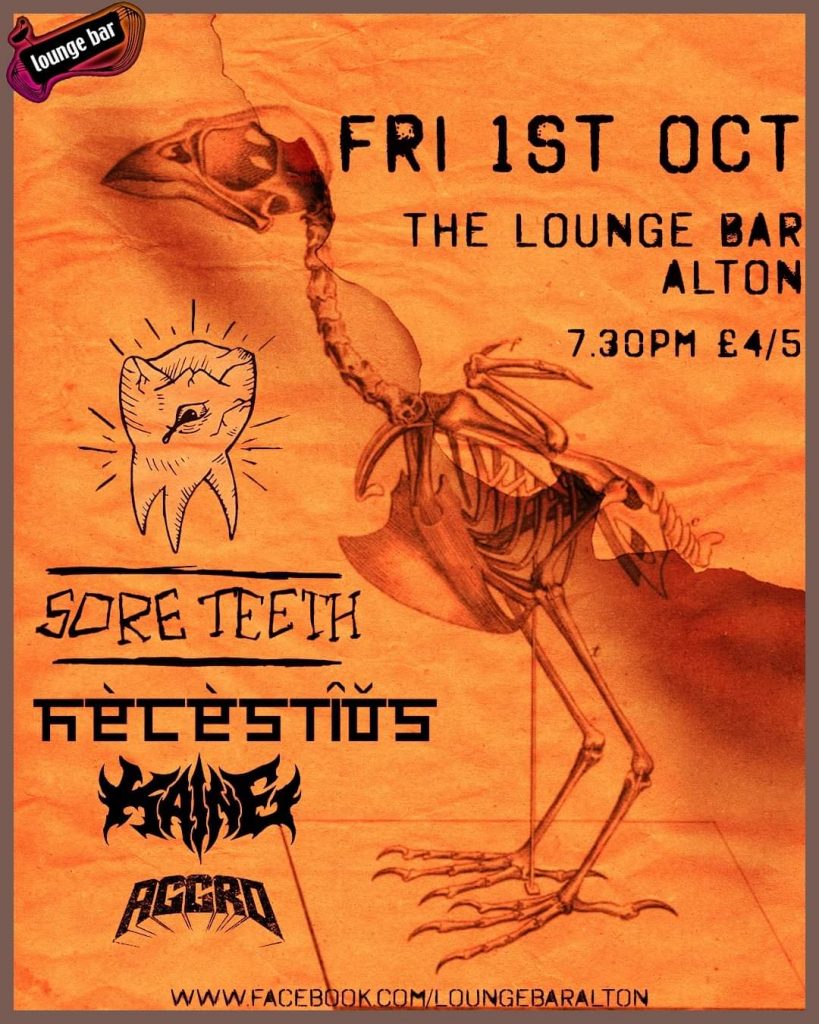 Tags:Aggro, Helestios, Kaine, Sore Teeth, The Shift Of Balance, This Is Our Core, Your Pain Tastes Good