Seven sins and seven days after the first interview, we return to the apocalyptic wasteland for a second time to speak to vocalist Geoff Hodsman from Canadian Death Grind merchants Human Compost about their third album “Descendants of Evil“. He recorded, mixed, mastered the record at Ecliptic Recordings, making him the prime candidate to talk about what went in behind the scenes on this horror filled festival of darkness…

How did your previous experiences writing and recording help to smooth the path of the new record? “Regarding writing, Chris is kind of a savant in that he just comes up with sick tunes by himself. He doesn’t even play guitar, but you sit him down in front of his laptop when the vibe is right and great songs arrive fully formed quickly and easily. I’ve known him for twelve years now and he’s been doing this all this time, so I guess he’s sort of developed a mastery for his songcraft. Then we also have a new factor, in that Patrick, who is new on this album as our lead guitarist, has contributed some song writing as well. He is incredibly dedicated as well as talented and his riffs did add a certain extra sickness.
For recording, I actually run my own home studio called Ecliptic Recordings. It just opened last year. You’ll find some other Toronto bands, especially ones with some relation to us, also begin to release music recorded by me here. I’ve recorded a lot of metal so far and developed my own methods and style, and I’ve also recorded almost everyone on DESCENDANTS OF EVIL many times before, so recording this was easier than any recording previous”
You’ve mentioned bassist Chris Sabbath as being the main songwriter in the band. How does the writing process of a new track start? Melody, riff or rhythm first? How does it evolve from there before you consider it the finished article? “Chris will have an idea, usually a riff. He’ll tab it out and add the drumbeat he feels suits it. From there it just kind of spills out, more riffs, more beats, etc as the song takes form. Soon you have an entire song and the band will begin learning to play it. The song will have a title or some generic name like ‘Song C’. Then and only then do we get into the vocals. Usually I’ll start with just determining what patterns I’ll do and what sort of ‘noises’ I’ll use. From that I’ll figure out the lyrics, and those lyrics will either be based on the song title or, if it just has a generic placeholder name I’ll come up with my own title and topic for the lyrics”
How did you find recording, mixing and mastering at your own studio Ecliptic Recordings? Did having vocalist Geoff Hodsman behind the boards give you more  time and space to create or was he something of a hard task master? “The studio may be new but the recordist isn’t – everyone except Patrick already knew what it’s like to record with me. And we’re all friends and drinking buddies, so naturally every recording session was just a fun hangout. Considering the album was recorded during the pandemic, and no money had to be paid to me to do so, everyone was free to take as long as they want. I may have been a bit of a task master in that I may have required revision of some parts, but the band agrees it was all in the end worth it”
If you had the opportunity to work with a guest in the studio next time around, who would you like to work with and why? “Hmm… well it’s likely we’ll continue to feature our buddy Aaron as a guest lead, we are always thrilled with the sick shit that man comes up with. I wouldn’t mind guest vocals either, those are always fun. Preferably someone we’re buddies with in the local scene, such as Matt (Vesication, Creme Fleshe)”

For us gear nerds out there, can you tell us what you’re using gear wise (pedals, strings, drums etc) to get your sound? “Our guitarists both use EMG81 loaded guitars, Eddie an ESP LTD and Patrick a Jackson. The guitars were quad tracked so you have two recordings at all times of both their rigs, which are a) ENGL Blackmore and b) boosted Peavey 6505+. Patrick also featured an Electro Harmonix POG and a Morley Bad Horsie wah on some guitar parts. Bass was a Schecter Omen four string with Sansamp creating all the gain. Drums featured on DESCENDANTS OF EVIL are the Ecliptic Records house kit: a Ferrari red late eighties Pearl Export and a Pearl 14″x6.5” Sensitone Elite snare. Sabian cymbals. The kick sample is actually lifted off a classic Florida death metal recording”

What difference would it make to you as a band if you could land an endorsement from a gear manufacturer? “It might help to get our name out if the manufacturer likes to feature their endorsees in their promotions, as there is a lot of overlap between metal fans and gear nerds. I’m sure any of the musicians in this band would jump at the chance to have free or discounted equipment as well. That means more money for beer, after all!” 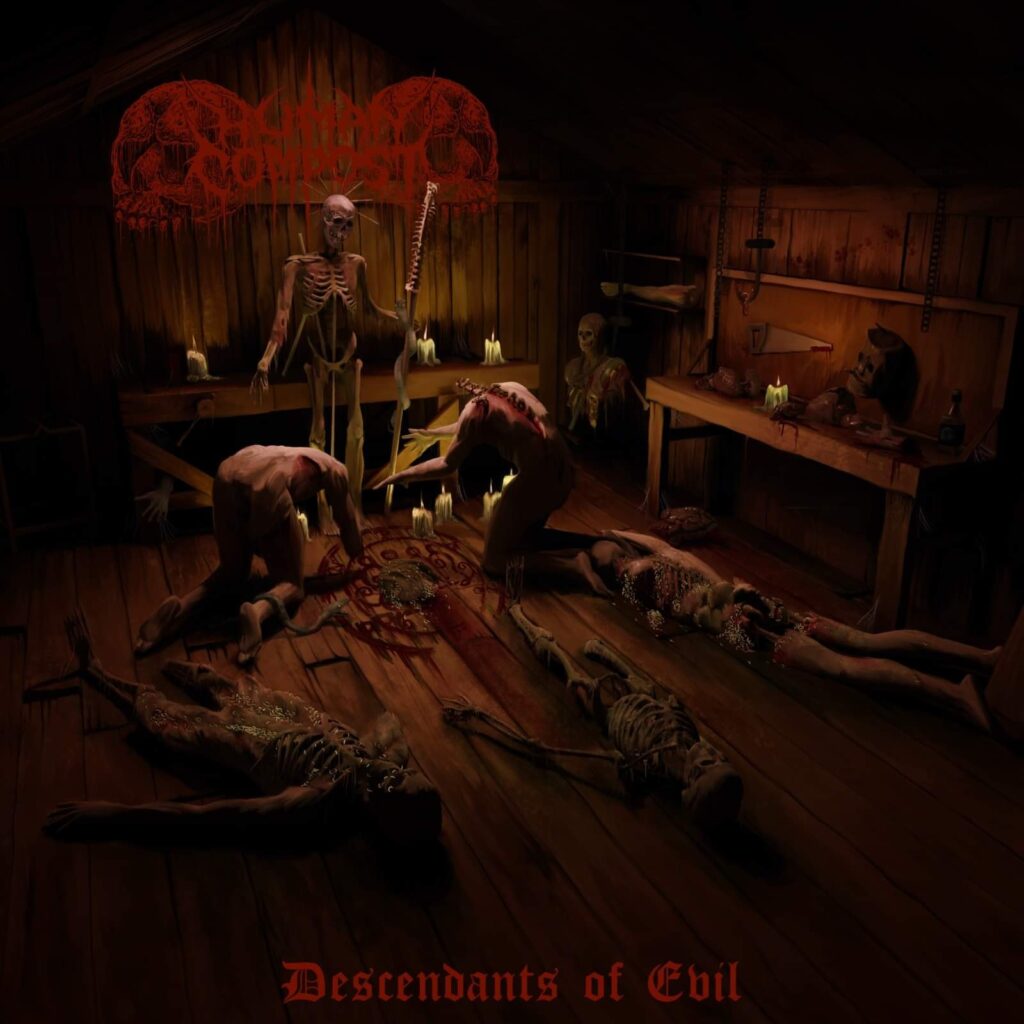