Beginning his solo project in 2016, Mexican guitarist Leo Romero took on board the influences of Sergey Golovin, Emil Werstler (ex-Daath, ex-Chimaira) and Wes Hauch (ex-The Faceless, Alluvial) to name but a few and began painting in a palette of Death and Progressive Metal combined with DJent elements. While his music does not have lyrics it is based on futuristic themes, astronomy and dystopian futures which are reflected in the nature of not only the sound but the song titles and artwork as well. First picking up a guitar at the age of 8, by 15 he was looking to the likes of Steve Vai, John Petrucci, Marty Friedman for inspiration and now has a degree in contemporary music composition. 2017 saw the arrival of a debut mini EP titled “Nebula” which was accompanied by live shows and guitar clinics before in 2020 he released a pair of singles which would later appear on this debut EP in 2022…

Rising from a melancholic introduction with a captivating and heart warming piece of soloing, title track “Epigenesis” comes to life with guitar layering offering an intricate rhythm underneath the continued fretboard smouldering of an evil genius at work. As enthralling as page turning thriller, the opening cut offers an introduction in which the guitar is King and absolutely nothing is held back in the reign of fire. “Prometheus” continues the mesmeric soloing but with rhythm guitars that are reminiscent of the tones used by Jim Root and Mick Thompson on “Vol: 3 (The Subliminal Verses)” by Slipknot, which gives the tune a curious nostalgic charm. Similarly “Gargantua” confirms Romero’s abilities as a DJentleman with sweeping solos over some tectonic plate shifting groove, firing warning shots at genre leaders like Periphery while at the same time sending up signal flares into the night sky and begging to be taken on tour with them. All the while the drum machine metronomically keeps pace, sounding a little bit flat on occasion but never distracting from the constant flow of spine tingling lead work that no doubt has calluses built up where bloody fingers once dared to tread, battered and bruised but determined to put a size 12 boot print on Planet Metal and rise the challenges set by the elite. There’s no doubt that there should any band be looking for a fill in guitarist for touring or someone to write with then Leo Romero as all the talent needed to not only hold his own but be a stand out performer in many a metal genre. The evidence is written all over this EP like a curriculum vitae for all to see. Arguably the most accessible cut “Apophis” flies like an angel, the solos driven by a solid Metalcore rhythm with the energy and performance levels reaching dizzying heights and approaching Power Metal speeds. The final offering is the short and sweet atmospheric piece “Eros (Lovers)“, one which could go on far longer but instead signs off the EP with a smile [8/10]

“Epigenesis” by Leo Romero is out now via Leini Romerini Records 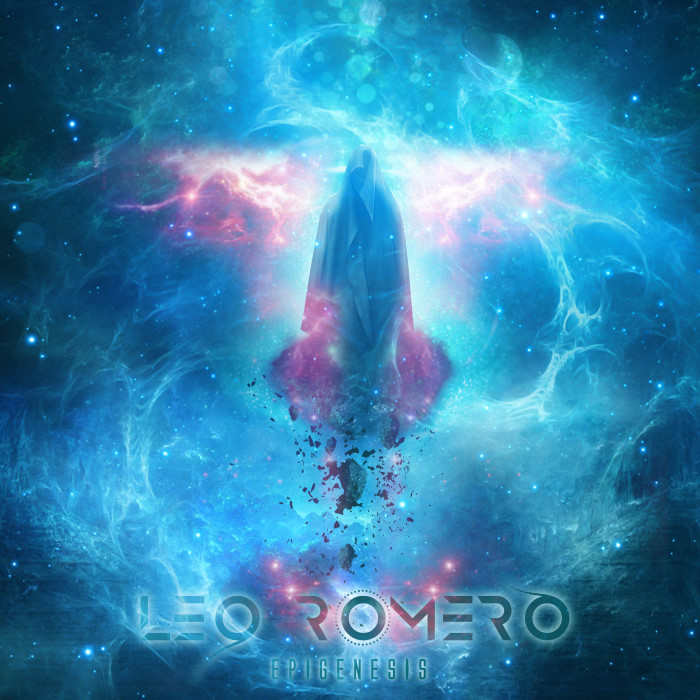