Skip to content
HomeReviewReview: “Asking To Be Killed” by Nighnacht

They say that three times a charm and for Nighnacht their third EP “Asking To Be Killed” represents a continuation of their low budget horror film narrative with Nunslaughter frontman Don Of The Dead leading the way to the slaughterhouse. In 2019 the quartet released their debut EP “Christophilia” and wasted no time in following it up with another a year later in “Murder Myself“. They’re not the kind of band who know when they’re onto a good thing or know when to stop and with Toledo Ohio’s Morbid And Miserable Records their task masters, another seven tracks have been pulled kicking and screaming from freshly dug graves for this…

Having been left in the darkness of solitary confinement to go feral with madness Nighnacht waste no time in unleashing a chaotic blend of Hardcore Punk, Grindcore, Crust Punk, Death and Black Metal upon unsuspecting ear drums with “Asking To Be Killed“. Attacking with off Old School Death Metal riffs and a rhythmic pummelling, “Defiling Your Corpse” gets the blood pumping with Don Of The Dead sounding nothing short of deranged. His vocals are neither clean nor unclean but the warped delusions of a split personality talking in tongues and speaking his mind, painting a picture of dementated horror, like a child’s finger painting in blood. The title track brings a Thrash solo to a stomp laden 91 second burst of visceral hate as the band rattle through motions while lacking a little punch; their style is pretty much all screeched verse and dirty rhythm served short and sickly sweet. By the time “Auto Euthanasia” hits, it’s clear that Don needs to be locked up in a padded room in Arkham Asylum and spoon fed gelatine free jelly from a plastic spoon until his unnatural dying day. While he speaks, the band rampage through riffs and rhythms inspired by the likes of Pestilence before cutting abruptly short and denying us any further opportunity to listen to their musings. It is actually one of the finer moments, not gourmet but home cooked by Nellie Lovett, the love interest of Sweeny Todd. Slowing the tempo down to give us something with more sinister groove, “Dealing With Grief” stomps with a satisfying cockroach crunch, an ode to the sorrows of loss in poetry that takes a moment to get your head around due to the nature of the vocal performance. A help and a hinderance as two sides of the same coin. Offering another voice “Existence Is Futile” is a slow headbang to oblivion with a scathing, scalding approach that bubbles with Death Metal witchcraft. It is however merely the preparation for “Chopping Up The Dead“, a violent side order of the grotesque that would make Brainbath and Penny Coffin sit up and pay attention, if nothing else, simply because its surprisingly good fun. As with all these tracks it sounds like the band are playing in a dank dark basement torture chamber hell but it is far from rough and ready. The tour de force “In The Woods At Halloween“, a final onslaught that confirms death with blood gargling freshness as the psychotic wails and screeches continue long into the night… [7/10]

“Asking To Be Killed” by Nighnacht is out 2nd December 2022 via Morbid And Miserable Records with and is available over at bandcamp. 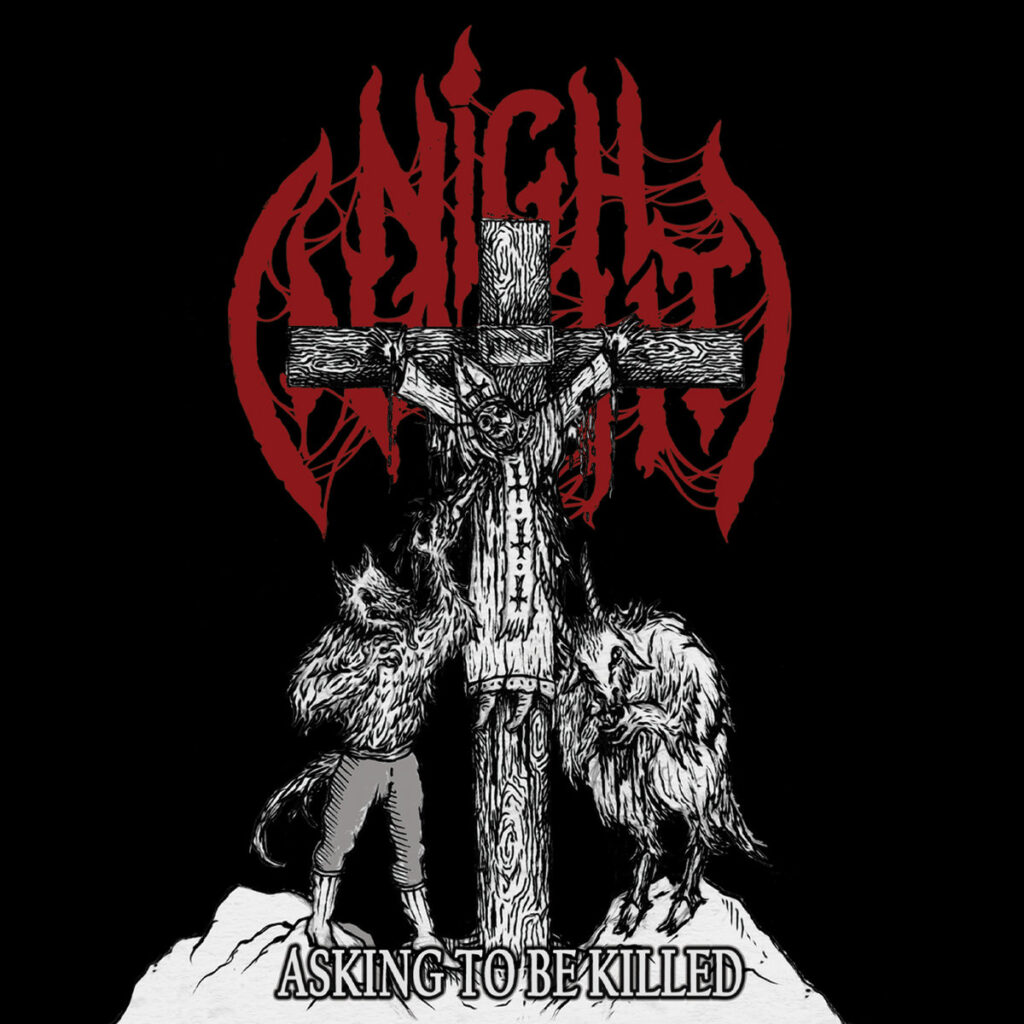