The second single “Oceans Subside” from the sophomore EP “Show Me The Signs” by Newcastle based Rituals that drops on 2nd September has been given the one take guitar playthrough treatment by Ewan Lee. The record follows on from their 2021 offering “Awake” which found the band continuing in a heavier direction having originally formed in
Read More

Having recently supported both Skindred and Osiah, Northern Modern Metal outfit Rituals have dropped a music video directed by Clearway Media for a single titled “Oceans Subside“. Part of the preparation for a new EP “Show Me The Signs” which drops on 2nd September to follow their received debut “Awake“, it will be one no doubt
Read More

A week after the release of the latest single from their upcoming EP “Show Me The Signs”, Newcastle Metal quartet Rituals have returned to the practice space to record a playthrough video for the cut, one titled “In Devastation“. Said to see the band continue their evolution to a heavier sound, the new record is
Read More

“Behold the new beginnings, It’s all I’ve ever needed, For the sake of all the new beginnings, Starve my brain of all I needed to live with meaning…” The news of the sophomore EP from Newcastle based Metal quartet Rituals has landed with a razor sharp riff affair of a new single titled “In Devastation“.
Read More

It’s been a meteoric rise for Newcastle quartet Rituals since 2019 with a trio of impressive singles putting them firmly on the map before  their EP “Awake” landed, a Metalcore ripper with a few embellishments of Post-Hardcore for good measure. They’ve given their drummer a moment in the limelight for a playthrough video for “Carved
Read More

Forming in 2019, Newcastle quartet Rituals honed their skills and developed their sound in 2020 dropping a trio of successful stand alone singles in “P.O.V“, “Snakes Head” and “False Royal“, each one of which showed a consistent growth while promising that their debut EP is simply the start with a wealth of material said to
Read More

Rising Newcastle Metalcore quartet Rituals hit a trio of home runs in 2020 with singles “P.O.V“,  “Snakes Head” and “False Royal” as they honed their craft and prepared a fanbase for their debut EP, a four track affair simply titled “Awake“. 3rd September is the date for the drop with the band sharing single “Turn
Read More

Travelling back down the United Kingdom from Glasgow and Death Infused Thrash act Dominicide to Newcastle and Rituals who describe themselves as Modern Metal is the way we roll with our weekly look at the UK Underground Metal scene. Both bands have in common that they’re dropping new EPs in September (which is where the
Read More 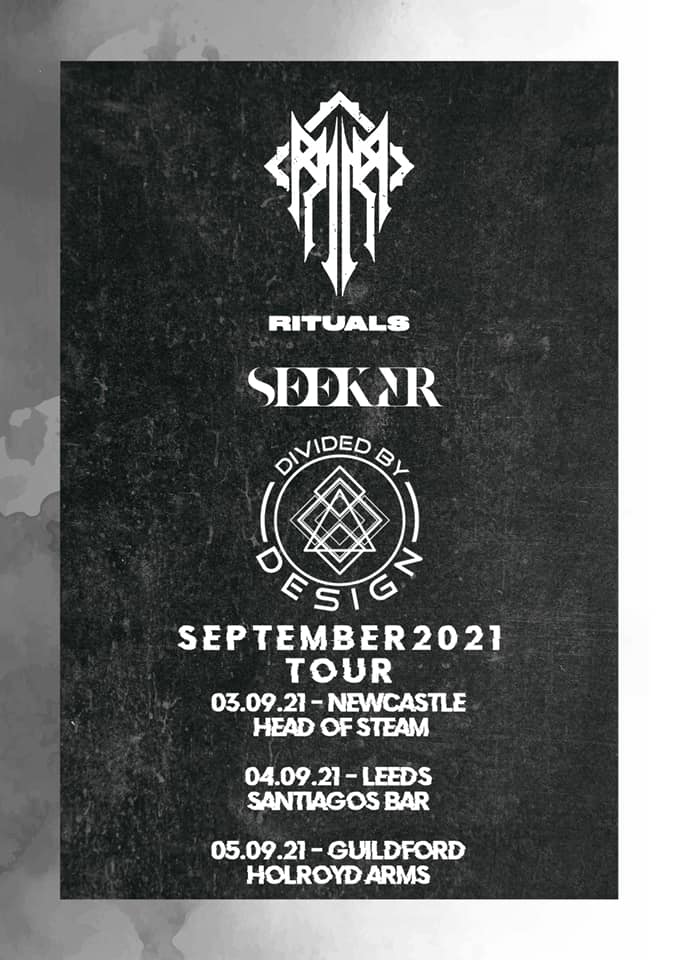 All things being right, proper and fair in the World will mean that Newcastle based quartet Rituals will be allowed to celebrate the release of their debut EP “Awake” with a run of three shows in September that will see them joined by Seeker and Divided by Design. A music video for the title track
Read More

After a string of singles through 2020 in “P.O.V“, “Snakes Head” and “False Royal“, fast emerging Northern powerhouse Rituals have set 3rd September as the date to launch their ship into the seven seas of Metal. It comes in the form of EP “Awake” which is already available for pre-order here coinciding with the surfacing
Read More