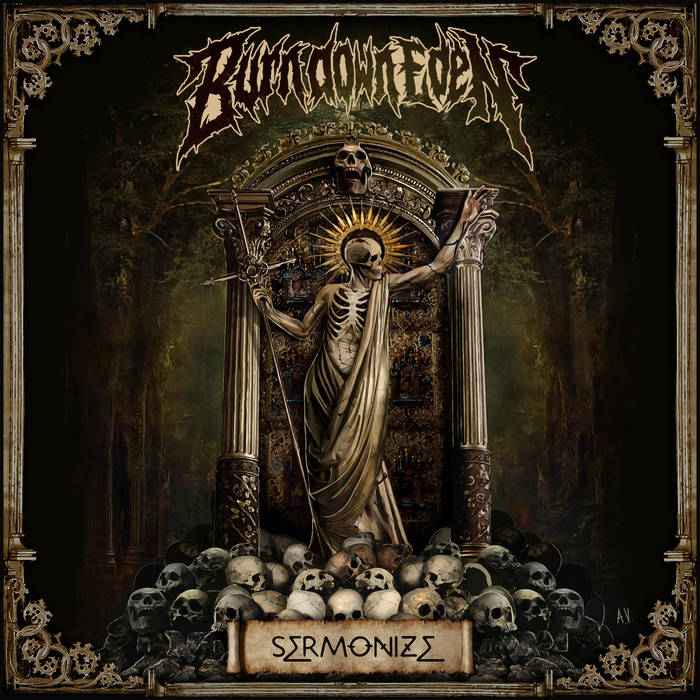 Just nine months after their self titled album dropped, Berlin Germany based Blackened Melodic Death Metal quintet Burn Down Eden returned with an EP “Sermonize” and a new label home in Seek & Strike Records (Upon A Burning Body, The Dialectic) which makes them nothing if not prolific in anyone’s book. We actually gave the
Read More

If you missed it, Seek & Strike Records (Upon A Burning Body, The Dialectic) are keen to show you why you should be checking out EP “Sermonize” by Burn Down Eden with a music video for one of its stand out cuts in “Inquisitorial Belief Assertion” that has flavours of the Salem Witch trials about
Read More

It’s been a whirlwind of a past nine months for Berlin Germany based Blackened Melodic Death Metal quintet Burn Down Eden who have gone from releasing their self titled third album to inking a deal in blood with Seek & Strike Records, the label home of Upon A Burning Body, Orbit Culture and Exist Immortal
Read More

Ahead of their distribution of the new Burn Down Eden EP “Sermonize” on 18th February,  Seek & Strike records have shared a guitar playthrough video for the title track. Following on from where the Berlin, Germany residents self titled debut album left off just nine months ago, it is set to be a fast paced
Read More

Expect the unexpected and you’ll be prepared for anything; with “Bizarre Circus” German Melodic Death Metallers Burn Down Eden bring the diss track from Battle Rap into the heart of Metal by calling out a band that they met many times on tour with some hilarious “misheard” lyrics. The track is peeled off of the bands
Read More

…with pre-orders available here, German Melodic Death Metallers Burn Down Eden have premiered the third single from their upcoming third self titled album. The track chosen is “Sadomasochists From Beyond the Grave” with the band giving credit to the Hellraiser movies for some of the inspirations behind it, picking up where their second album “Liberticidal” left off
Read More