The lockdown blues has been something that has affected us all during the Great Plague. Some, well, most people have put on weight, bought s*** they don’t need from the internet and binge watched Netflix series to pass the time. But not London Metalcore outfit Enquire Within. Oh no. They’ve been hamming out not only
Read More

Having scrapped off all their touring plans for the entirety of 2020 earlier this week, Frenchmen Gojira have taken the approach that rather than take any risks they’re going to come out fighting in 2021. Who can blame them, it makes perfect sense. They’ve shared an extended cut of their song “Pray” from their performance
Read More 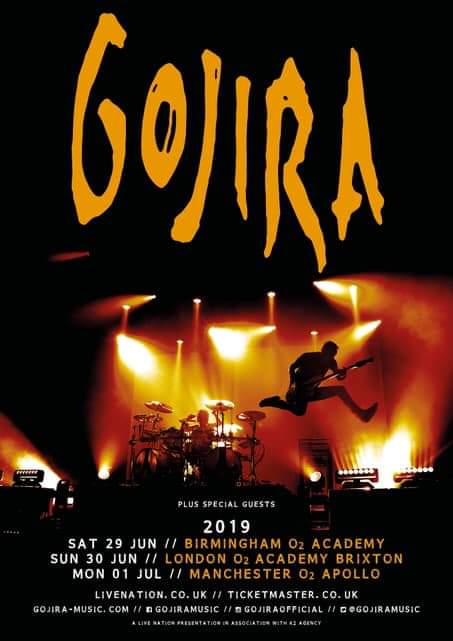 Originally formed as Godzilla in 1996 and changing their name five years later to Gojira, brothers Joe Duplantier (lead vocals, guitar) and Mario Duplantier (drums, backing vocals), guitarist Christian Andreu, and bassist Jean-Michel Labadie are well known to most. They hail from the city of Bayonne in France and are known for Environmental themed lyrics while
Read More

Ever wondered what Frenchmen Gojira would cover if they had the chance? The answer is simple. After a quartet of Metallica teases they dive into personal favourite “Territory” by none other that Sepultura in sublime style! A hugely influencial band in their own right, Gojira received Grammy award nominations for their 2016 album “Magma”.
Read More

Steven from Neutral DSP shows you how to dial in the guitar tones for “Silvera” by Gojira in this documentary that our friends in Kodama might like to watch, being huge fans of the Frenchmen. The band themselves have unveiled some shows with KoRn next summer around numerous festival appearances. They’ve also landed the number
Read More

French Metallers Gojira have announced a break from their summer European Festival run with a trio of UK dates! The tickets go on sale on Friday 8th February with no word on the support acts. That being said, the real question is… Will we get a follow up to 2016’s “Magma” this year?! 06/29 Birmingham,
Read More