Armed with album number four “Numb The Ache“, Nu-Metalcore bone crushers VCTMS are flipping the script and broadening their horizons with more wide ranging tour partners than they would usually share stages with about to do just that. The rest of this month sees them join Veil Of Maya, Born Of Osiris and Hunt the
Read More

Federico Ascari (Within Destruction, Defamed) has created a remix of “Dreaming Desecration” as the final release by Deathcore titans Signs Of The Swarm before they part company with Unique Leader Records. What are the chances of the announcement that they’ve signed with Napalm Records or Nuclear Blast in the not too distant future? The band
Read More

Be warned as viewer discretion is advised for another pre-release music video from the upcoming album “Vol IV. Numb The Ache” from VCTMS. As the title suggests, the chamber spins four for the Nu-Metalcore merchants with Dylan Torre and Patrick Dowling of Weeping Wound making their presence felt on “Pull From The Hurt“, which follows
Read More

After her appearance on the TrueShot guest spot interview series during the week just gone offered an insight into the inner workings of her band VCTMS, Meredith Henderson is bank behind the kit for a stormy new single “Hell Is Other People“. Taken from the bands upcoming 9th July full length “Vol IV: Numb The
Read More

VCTMS have been premiering new material of late with a new album on the horizon so the obvious choice for the latest interview with TrueShot is one Meredith Henderson, better known as the bands drummer, vocalist and lyricist. If you missed it, they’ll be out with Ingested, Vulvodynia and Bound In Fear on the rescheduled
Read More

Featuring Juan Gutierrez of A Friend A Foe and complete with a music video shot in both Las Vegas Nevada and Chicago Illinois by Matthue Cole and Austin Scherzberg, Nu-Metalcore bad luck crew VCTMS have premiered a new cut called “New Face // Same Loneliness” from their upcoming album “Vol IV. Numb The Ache” which
Read More 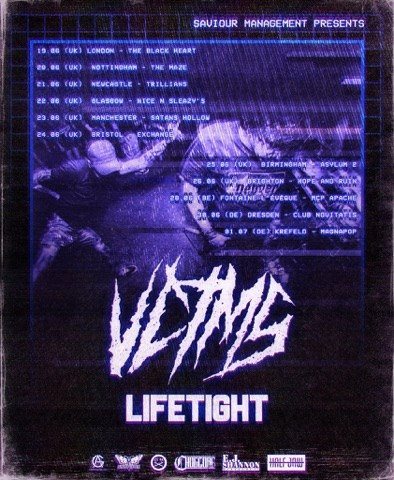 As teased on social media, VCTMS have dropped a new single from their upcoming summer 2021 releasing new album “Vol. 4: Numb The Ache“. Entitled “Carefully // Caged“, the track sees Darius Tehrani of Spite rejoining the party and lending his throat as he did previously on “The Relapse” on 2017’s “Vol. II: Inside The
Read More

…with a new song “Carefully Caged” dropping tomorrow, 3rd February and a new album entitled “Vol. 4: Numb To The Ache“, Steamwood Illinois Nu-Metalcore Bad Luck Crew VCTMS full set from Pulse of the Maggots festival stream has been released by KnotFest.com for your viewing pleasure. The artwork for that new album is online but
Read More