Söderhamn, Sweden based Metallic Hardcore quintet R.A.T.S broadsided us, not unlike a freight train smashing through a car at a level crossing with their debut EP “Another Day in Helvete“, which is not only a stone cold instant classic in the genre but also has influences of New York Hardcore Punk and Black Metal in the mix. All of that makes perfect sense for an interview with so many questions on our tiny minds…

How challenging was it creating a new band in the middle of a Global Pandemic? How did the situation affect the recording process with Dennis Bertilsson (who also mixed and mastered)?

Anton Larsson (vocals): “We started to record our debut EP late 2019 and had the plan to release it on the first half of 2020. A lot of the time we emailed files back and forth. We learn to work around the fact that we can not travel or meet. Honestly, all we want now though is to play live and tour. No more isolation. Ever. Dennis (who is also the guitarist of the band) had a couple of postponed recordings, so we all said that there is no rush with out EP. We were in the studio once a week for a couple of months and took it slow. We didnt want to release it when we didnt know that much about the pandemic. Most of the songs where done before all the restrictions though”

You brought in July Salazar of Tomar Control for “Set Fire to the Fury“. What was it like working with her? Are you hoping to have the opportunity to have her reprise her role live with the bands sharing a stage at some point in the future?

Anton: “I’ve always felt at home in the hardcore scene. So when I was in Lima, Peru 2018 I had the luck to see Perus finest Tomar Control. July Salazar is the vocalist of the band and we kept bumping into each other at different shows. She is a person thay really keeps the positive mental attitude and loves the hardcore scene and the community. When I wrote and asked if she wanted to do guest vocals for Set Fire to the Fury she said “YES OF COURSE!” straight away. Since we already did a lot of the writing online it was no problem to send files and videos across the globe basically. I love that mindset of this scene. Everyone is helping everyone out”

While “Another Day in Helvete” is a gloriously varied listen, “Saprophytes” is a real departure from Metallic Hardcore with some Black Metal moments. What was the inspiration for that? Did you think at any point that it might be a bridge too far for some fans?

Joakim Pettersson (Drums): “Saprophytes is a testament to the fact that we all contribute to the writing process. We agreed that we would mix some genres in some ways as long as it still had a R.A.T.S vibe to it. Saprophytes is no exception. We do not consider ourselves having fans, we have friends. And if they don’t like this particular song then hopefully they like the rest”

Anton: “Who doesnt like black metal influences?! I love this track so much. It was very funny to write and even more fun to play. Especially looking at Joakim in the end of the song. Lyrically I believe some people might flee. Like very rich exploiting people. They are the ones to be eaten by the saprophytes. And when they do, we Hunt Them. Haha.”

How did you find Kiev Ukraine based tattoo artist Yaroslav Yakimenko and how did you persuade him to create the cover art for your debut EP?

Anton: “I found his studio on instagram when I was searching for nice traditional tattooers while being in Kiev. There is no small talk like the small talk while getting tattooed. Sweaty and shuddy awkward talk to forget that it fucking hurts (everyone who says it doesnt is lying). Yaroslav had a lot of rad stickers on the walls in the studio and rad music on so I asked if he’d be interested, and that he was!”

Your bandcamp page has “HARDCORE IN DA SNOW” in the Bio section; so have you ever played Hardcore in the snow? If The Defiled can play on an Iceberg for Jagermeister, why not? What would be the strangest place you’d consider playing a show?

Joakim: “A dream for me would be to play in like a nursing home. Imagine seeing old people get their stagedives and two-steps on. A daycare would be pretty rad to”

“Another Day In Helvete” by R.A.T.S is out now and available over at bandcamp 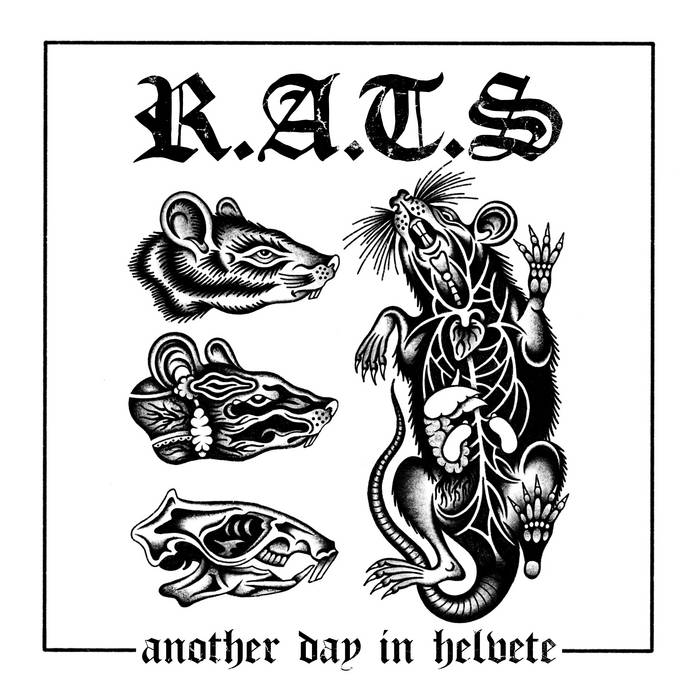