“Descending from the eternal darkness that lurks between the stars, that ineffable absence of light that seems to seethe with a hunger that could consume galaxies in the moment of silence between two heartbeats, from that blackness beyond night he comes – with the fate of a world in his cold, dry hands and the dust of countless species and civilisations found wanting, drifting in his wake. The echoes of their final screams hang in the air around him, anguish on the edge of hearing. Our day of reckoning is here.” ~ Morgan Cradick, Moon Reaper

One of the most diverse and yet darkly observant EPs to be released this year, “Descent” by Moon Reaper is a journey through Metallic sub-genres that defies the odds and comes out swinging at every twist and turn or folk in the road, a beast of a debut that is as good as it is ambitious. We had the pleasure of a chat with guitarist and vocalist Morgan Cradick from the Bristol based trio which is neatly split into two halves; here is the first…

How have you found the reaction to the Moon Reaper sound so far? “A little slow, but overwhelming positive, a very niche market obviously has its restrictions but we’re confident that we can overcome this hurdle with time and work”

According to your biography you’ve been a force to be reckoned with since 2018 so has the debut EP “Descent” been something of a labour of love in the making? “Absolutely, this project is the amalgamation of a million things we love about metal, and also astrophysics. Descent has been almost painfully pleasurable in its construction, but we would do it again the same way”

You have a really diverse sound and have been snapped by the paparazzi in various different bands t-shirts, so who would you consider the main influences on your sound and why? “In no particular order: Gojira, Conjurer, Black Tongue, Swallow the Sun, Ellende, Agalloch, Malevolence, Humanity’s Last Breath, Cattle Decapitation, At the Gates and Knocked Loose”

You’ve been described as a Progressive Blackened Doom band but in truth blend colours and blur the lines between Doom, Post, Progressive, Black, Downtempo, Deathcore, DJent, Death and Sludge Metal. So are genre tags still relevant in 2021 with so many bands stylistically leaping sub-genres in a single death defying leap during cuts? How would you sum up your bands sound? “Genres are indeed becoming less defined as the lines between each become blurred with each new band or album, so I’d say that they serve a purpose, for now. Although we believe eventually, each band will hold its own theme or collection of genres, which in turn will be definable only by the band in question. Sum it up? Haha. Progressive blackened doom-ridden sludgy downtempo experimental atmospheric groovy downtempo beatdown. Although it would be far more efficient to call us Cosmic Metal due to our thematic element”

There are a couple of clean vocal passages towards the tail end of the EP that work really well; How did you go about getting them right and did you feel brave taking them on, knowing that a keyboard warrior might try and bash you for them? “Well thank you, they were one of the most challenging aspects, due to our vocalist being mostly experienced in the field of harsh and not clean vocals. Keyboard warrior? Oh you mean stay at home irrelevant elitists that have nothing better to do than to scrutinise bands over aspects of their own music, the people doomed to patrol the YouTube comments sections for eternity? Yeah, not too bothered”

What does the future hold for Moon Reaper? You must be itching to get back to the stage? “We are indeed! New line up means new live vibes, but the stage is where we’ll proliferate. The future holds a long and relentless road of cosmic endeavour and musical succession, but imminently? A debut album will be in the making as soon as Descent is out and we’ve established a name for ourselves”

“Descent” by Moon Reaper is out now and available over at bandcamp. 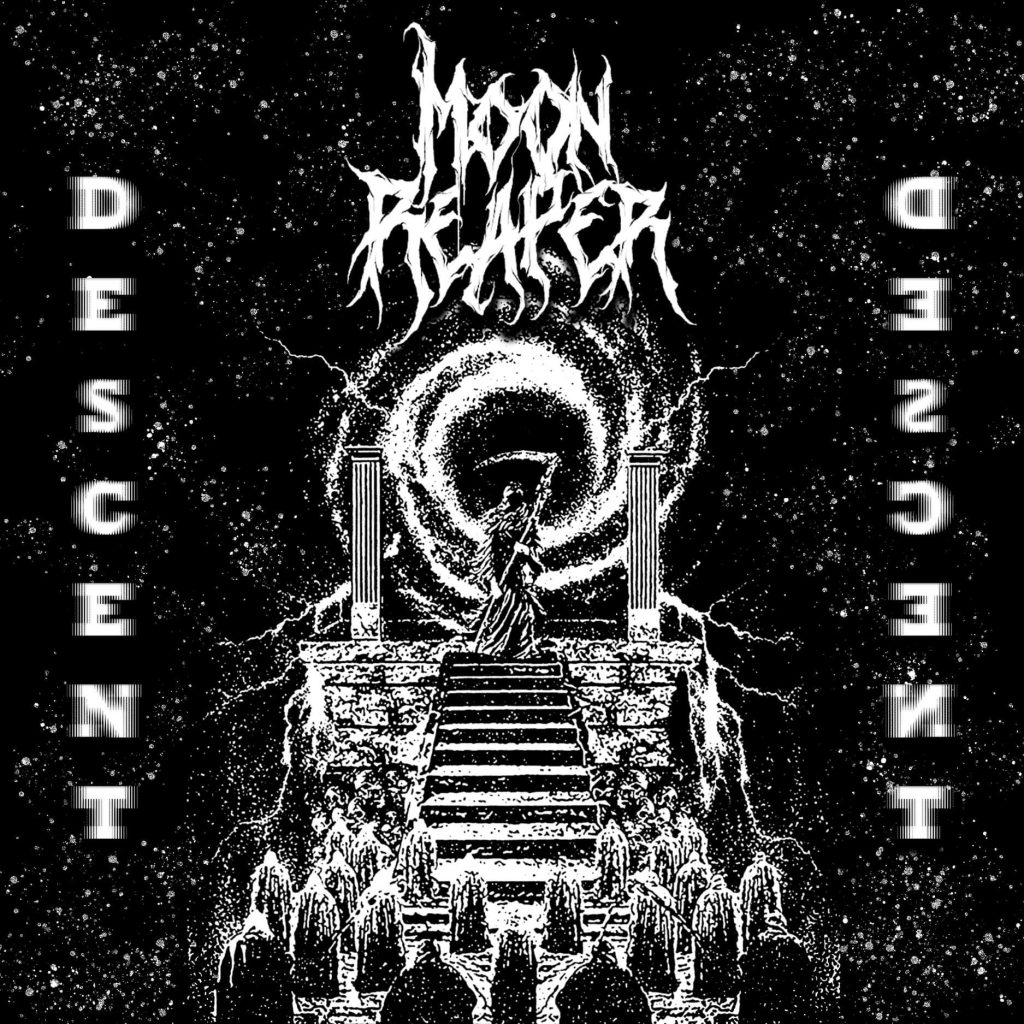