Hailing from bowels of Los Angeles California Vaelmyst burst onto the scene in 2017 with the mountain moving EP “Earthly Wounds” which harnesses other Worldly powers to make Ronny Lee Marks (Guitars, Bass), Jonathan V (Vocals) and Wyatt Bentley (Drums) true conduits of spiritual violence through the medium of Brutal Melodic Death Metal. Recording in house the only outsourced element of this, their debut full length album is Mastering which has been done by the highly respected Arthur Rizk (Road Mutant, Cavalera Conspiracy, Power Trip) with the band looking to expand their artistic pallette and obliterate new horizons.

Keeping everything in house means that there should be nothing but the bands own artistic vision of what they want to sound like with no outside ears to give them any form of direction and should make for something distilled down to its purest form. In following that left hand path Vaelmyst have remained true to themselves and not dispelled any of the nuances that made their debut EP such an impressive burnt offering. “Secrypts of the Egochasm” finds the band in the Bermuda triangle between Death Metal, Blackened  Thrash and the more Traditional Metal stylings with Jonathan V’s vocals taking his larynx the the very edge of its existence. Stylistically those vocals wouldn’t be out of place on any style of Extreme Metal and he has the ideal bowel clenching lows to suit your mood. Good use of layering means that the band have recorded an album that is literally more than the sum of their parts. There is enough guitar work to warrant two guitarists while the band have no separate bassist so either there will be some new recruits or they will be using a backing track while playing live, the vibrancy of the guitars on the album need to be done justice in that arena. The solos are incredible with Ronny Lee Marks showing off some real virtuoso skills in the likes of “Dawnless” while the leads on “Spineless Throne” are so scorchingly hot that they set the fretboard on fire, the latter being the bastard child of Betwitcher and Witherfall. Marks is more than happy to blast away any cobwebs with extended instrumental passages that delight the ears, which gives ample opportunity for Jonathan V to rest his vocal chords in preparation for his next caustic passage. On the kit Wyatt Bentley delivers the percussive rhythms with tight efficiency, the drum sound being clean and crisp with a decent level of bass drum sound for those all important jackhammer footwork moments.”Ghoulish Delight” sees Tyler Sturgill of Xoth drop a guest solo that raises the hairs on the back of your neck as he and Marks engage in the kind of solo dueling that has made Trivium their name. The combinations of styles within each song gives Vaelmyst an edge over the Wolf pack, not being afraid to shift through the gears by adding in a Traditional Metal riff section into an otherwise largely Death Metal song (or vice versa) where others would offer a tempo shift. Those transitions are silky smooth and avoid the trappings of being labeled style over substance and certainly don’t lose any of the energy of the music [7.5/10] 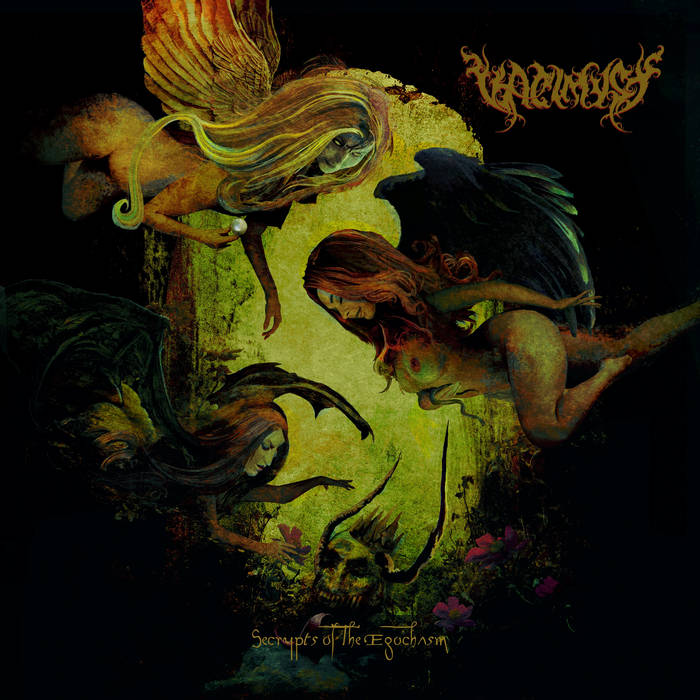