Combining Technical and Progressive riffs with melodic ambience, Brighton’s GAIA have been on a journey that saw them arrive at Bloodstock in 2019 before their self titled EP came busting out of our earphones a year later. They’re in the final stages of preparing a feast for us with a debut full length album on the horizon so after they dropped the second single from that in “Key And Gate“, we had a chat with them about pretty much everything they’ve got going on…

As you gear up to a new album in 2022, what was behind the decision to offer a first taste of what’s in store in single “Key and the Gate” so early? How have you found the reaction to it so far? “On releasing the first two singles the album was still being constructed, we were completely unaware as to how this would be released as we were yet to hear the album as a cohesive piece. Being a DIY band we know the importance of having more frequent content to promote. Therefore we wanted to do the album in parts. This was impossible until all content was finalized. Now we know the plan is to release the album in three sections. Once complete we will tie it together with a yet-to-be created artist piece. Both singles encapsulate the sonic identity of the album in a standalone format. Allowing us to showcase what to expect from the album as well as our insane new vocalist James Moffatt. So far the reaction has been overwhelming. When we performed ‘The Crawling Chaos’ the response we received from the audience was unprecedented to GAIA as a band. We are absolutely chuffed with how it’s going down and cannot wait to bring people more”

You’ve mentioned that your inspiration for the new album are the works of HP Lovecraft, usually something that inspires Black and Death Metal acts; what drew you to those tales for a Progressive Metal record? “GAIA as a band borrows from both light and dark influences. When beginning the writing process for the album there was no specific influence we had in mind. As composers we are always trying new things and we have been leaning towards the darker end of the spectrum during the last two years. Composer Jamie Clark enjoys composing encompassing arrangements and found he was using more abrasive and eerie textures within his songwriting. From this the cosmic theme arose. We have always let the music dictate the narrative and this is exactly what we did here. In the later stages of composing it became clear to us a lovecraftian theme would further compliment the compositions we had already written. There is also a parallel between a HP lovecraft short story and the journey of our new album. With the album we feel we have created an awkward sense of progression which concludes in a dose of reality. This is something we have taken influence from HP lovecraft and why we feel for this reason using this theme has been beneficial for a progressive metal record”

In 2019 you played the New Blood stage at Bloodstock and premiered a new song in “The White Ship” and you’ve also put out a cut called “The Crawling Chaos” since which begs the question, are either of those going to feature on the new record or are they standalone cuts? “Those two songs will definitely be on the album. When we performed them at Bloodstock we took our opportunity to play something which would appeal to a diverse audience. Not to mention, the song has a stadium/ballady vibe which was begging to be performed at such a setting”

How important was it for the bands progression to get to play the bigger stage at Bloodstock? “It was a landmark that pointed out to us how far we had come up until that point. It was the highest attended gig we had played and it was the occasion with the most recognition, therefore teaching us a lot about varying types of people from around the world. Our first taste of festival life (performing) was at Bloodstock and it was a positive learning curve for all of us. Despite Covid-19 halting our progress a little, we look back on our experiences at Bloodstock with great fondness. We hope to progress even further now the shackles are off once again”

The Brighton Metal scene is blossoming at the moment with everyone from Woe Betide to Bleed Again keeping things alive and venues like Komedia, Bar 42 and The Green Door Store putting on shows. How important has the local scene been for you? “The Brighton metal scene is absolutely everything to us. The local scene here has witnessed nearly everything we have achieved. There are many talented and hardworking individuals who make everything happen and for that we are so fortunate. Many venues host underground bands at a reasonable rate making it possible to put on our own shows. Plus, we have a great relationship with many local bands, which makes it easy to find support. That’s just Brighton for you, they’re all a lovely lot. The quality of musicianship in Brighton keeps everyone on their toes and their ears alert causing everyone to strive to be as great as they can”

What’s next for Gaia? “Due to the unprecedented times we live in, we just want to continue doing what we love doing as well as to make this album the very best we can. Music videos and tours would be amazing and if possible we will do them, but as it stands we need to take each day as it comes as being a D.I.Y band is hard; everything costs and we have to work to pay for it. The fact we get to write the music we like and people genuinely enjoy it is what keeps us going. As a band we are ready to embrace whatever comes our way and we hope to reach more listeners and receive their reactions in 2022″ 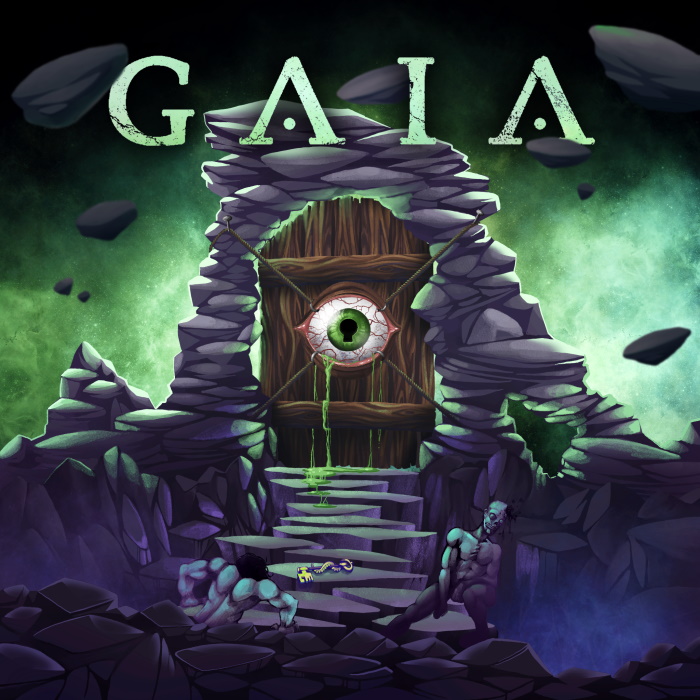