Skip to content
HomeExclusive InterviewsExclusive Interview: Mustasuo talk writing and recording “Hiljaisuus”!
We are nothing if not predictable and so for those who read the first, the anticipation of a second interview with Mustasuo mastermind Antti Saarilampi (guitar, vocals, songwriting) about what went into the recording of the Blackened Crust Punk abrasions of their new album “Hiljaisuus” could have been too much to contain. So 7 days after that original piece, here it is, for your reading pleasure.
What did you learn from the writing and recording sessions of 2020’s “Katharsis” that made creating “Hiljaisuus” easier? “The sessions for both albums were pretty easy actually, both times the instruments were recorded live in one day and vocals and all the extra stuff at our rehearsal room afterwards without any hurry or pressure. We all have quite an extensive history with music, so we can handle recording situations effectively when needed and not mess about too much. Practicing the material well is definitely the most important step!”
How does the writing process of a new track start? Melody, riff or rhythm first? How does it evolve from there before you consider it the finished article? “I’d say the riff comes first most of the time, sometimes there might be a rhythmic thing I want to incorporate and then write the guitar parts around that. I usually make pretty finished demos that I send to the other guys to check out. They’ve also made a couple tracks and hopefully will continue to make more! Writing the basis of a track alone seems to work well for us, as we simply don’t have time to spend every day jamming at the rehearsal room”
What made you stick to writing and recording in your native Finnish? Have you ever considered releasing any material in English? “I feel I get more nuance and expressiveness into the lyrics in Finnish, it’s my native language after all. Hopefully it’s also an element that makes us at least a bit unique and interesting abroad, Finnish being quite exotic to most people on Earth. I don’t think most people would be able to make out the lyrics anyway! There hasn’t been any plans or reason to release any English material as of yet, but it’s not totally out of the question”

“Katharsis” was recorded with Keijo Niinimaa (Vomiturition, Goatburner, Morbid Evils) who also handled mixing duties before the record was passed over to Brad Boatright (Leeched, Integrity, Gatecreeper) at Audiosiege for mastering. What was it like to work with such a well known pairing? “I had met Keijo a couple of times before, and he offered to record the album after seeing our gig. The process was really easy and relaxed, full props to him! The mastering was obviously done via internet and also went without any bigger problems. All in all, smooth sailing!”

For us gear nerds out there, can you tell us what you’re using gear wise (pedals, strings, drums etc) to get your sound? “I actually got a little bored with getting fancy with gear a while back, so I’ve made it a sort of challenge for myself to try to manage with as cheap as possible! All of my stuff is probably under 500€ combined, of course it helps that I’ve gotten most of it used. I use a Washburn N2 guitar with 10-52 stainless steel strings and Dunlop Max-Grip 1.0 picks, a Boss ME-70 multi-effect pedal and a Laney TF700 hybrid amp head with a DIY 4×10 cabinet. Works well enough!  I also have a Mackie EM-89D vocal mic.

Tomi plays whatever random stuff he can get his hands on with Vic Firth 5B sticks.
On the album Christopher used a Warwick bass through Behringer Super Fuzz pedal to a Hartke amp head and Ampeg cab (none of us can remember the exact models…)”
What difference would it make to you as a band if you could land an endorsement from a gear manufacturer? “Wow, that seems like such a surreal thought! I’d like to believe that it wouldn’t have much of an effect other than I probably wouldn’t have to worry about my gear breaking down as much, haha!”
“Hiljaisuus” by Mustasuo is out now via Off Records and available over at bandcamp. 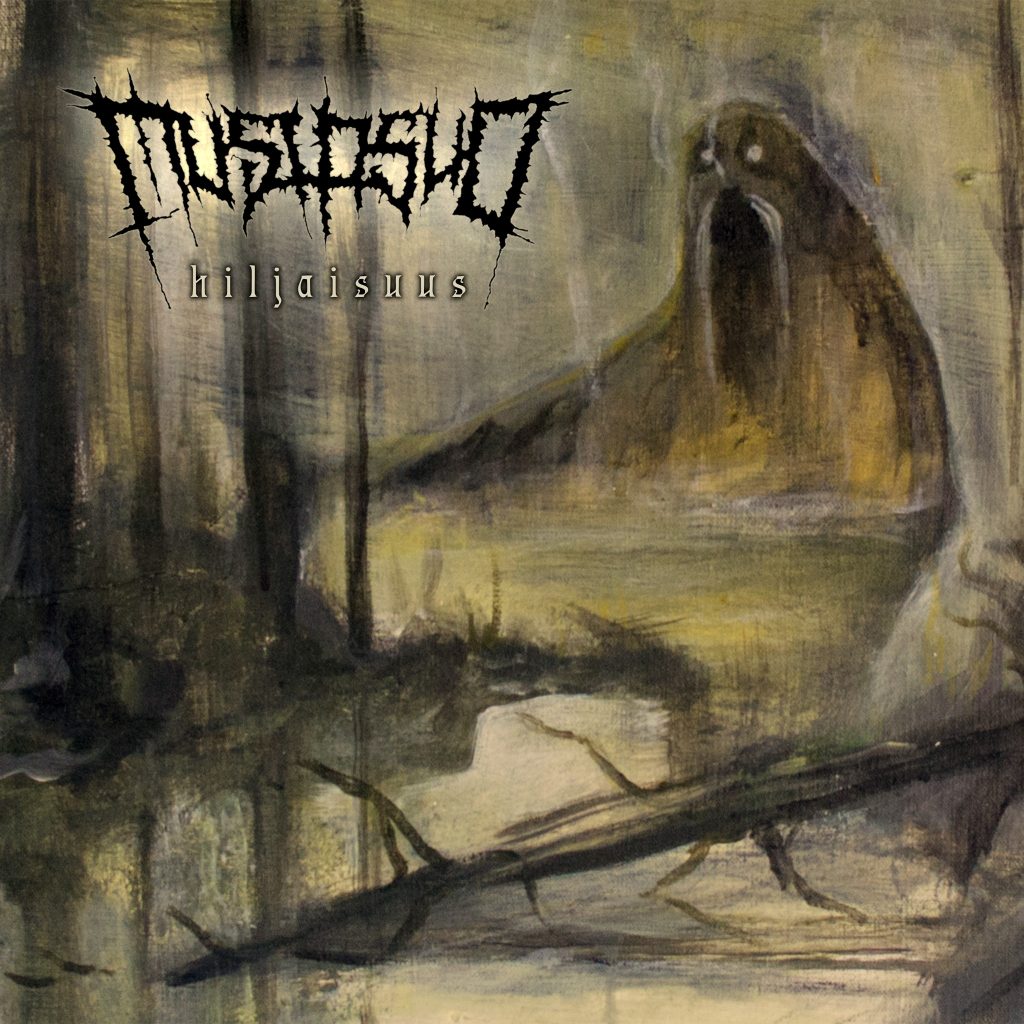