Skip to content
HomeReviewReview: “Born To Fall” by Guillotine A.D.

Produced by Matt Washburn at LedBelly Sound Studio (Atheist, Mastodon, Withered) and featuring cover art by Eliran Kantor (Testament, Trivium, Crowbar), “Born To Fall” marks the beginning of new era for a band who have been raising hell across the Southeast United States since 2017. Originally taking the name Guillotine, they dropped their self titled debut album that year before spending 5 years treading the boards with everyone from Cannibal Corpse to Exodus and Frozen Soul in a bid to make their presence felt. Reborn as Guillotine A.D. in 2021 as they signed with M-Theory audio, the band comprise an Athens Georgia based brother duo of Adam Miller (bass, vocals) and Lance Miller (guitars, vocals) who are joined by drummer Evan Posey and they claim inspiration from Death, Sludge and Black Metal, citing Eyehategod as being as influential on them as early Enslaved and Six Feet Under…

…Wearing their influence like tattoos upon their sleeves, Guillotine A.D. are very much a Southern shade of Death Metal, their hallmark unclean vocal savagery tearing at the flesh like vultures who have been circling, ravenous for their next meal. The eyes are alive with the devilment of each dark tale they have to offer, the throat grating style allowing the stories to flow with ease as Adam Miller depict the horrors he bares whiteness to. “Hammer” for example looks at the burning of witches from the perspective of a deranged inquisitor rather than from a more traditional satanic angle, lyrically a thinking Metal Head’s delight. Sonically as a trio they are surprisingly reminiscent of bands like A Life Once Lost, packing down their gunpowder tightly as they for the most part dispense with the need for leads. Instead they bring out endless Sludge Groove Metal riffs in a cleaner and less crushing tone than you might expect from the genre alongside the kind of rhymical pounding that other lesser bands fall short of. So instead of bludgeoning you to death immediately, they toy with you, torturing you until they’re ready to take your life.

Opening cut “Vultures of Paradise” is a slow burner that makes up for a lack of pace and energy with sinister edges, grinding guitars and plague wind vocals that set a dark tone before “Exile” does likewise, providing a couple of much needed tempo changes to break the hypnotic qualities of their sound. The intensity takes a fresh direction with “War First“, one which goes all out artillery shelling blasts with hints of Grindcore influence before a mid cut change up as the band groove deep. Not knowing any boundaries “Spiritual Inspect” has a melodic riff bridge that is oddly Post-Hardcore sounding before “I Want to Believe” flips the script entirely. The standout track is fired up and loaded with familiar Pantera inspired riffs as well as a plethora of leads which the earlier cuts scream out for at times, this one sounding Zakk Wylde is making a guest appearance. An adrenaline rush that breaks the album clean in two, the return to the bands previous rumbling bass and rhythmic power feels a little bit flat at first, saved by the slow breakdown in the final third of the beast that is “Hammer“. The problem here is not the material itself but the order in which the cuts are delivered and their length; put “I Want to Believe” at the end of the album and cut some of the fat from elsewhere as the average length is over five and a half minutes and you would have a leaner, meaner beast [7/10]

“Born To Fall” by Guillotine A.D. is out 24th June 2022 via M-Theory Audio with pre-orders available over at bandcamp 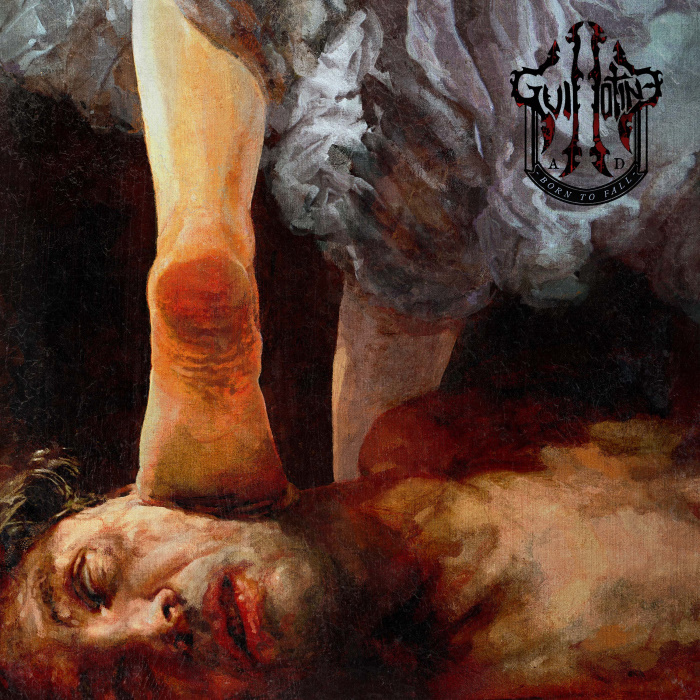