Aging disgracefully and maturing like a fine wine left open in the mid-afternoon sun, the past 27 years of Wolfbrigade, originally known as Wolfpack have seen them provide us with the crushing intensity of Death Metal fused to the skeleton of Punk. Some call it Crust others D-Beat but either way the Swedes have created  seven albums and toured internationally with their Metal tinged Discharge meets Motorhead on a hellbound train skull pounding.

“On Anti-Tank Dogs, we stare down into the abyss of conformity” state the band. “It’s our journey to the twilight world, the underground, a place that has no map or directions. Just follow no rules, abide by no laws, obliterate all obstacles, dismiss fear, and tell everyone to fuck off. Born to breed!”

Mastered by Magnus Lindberg (Converge, Cult of Luna, Hellacopters), nothing has changed for Wolfbrigade who sound as feral as ever with this new set of cuts. The title track is inspired by the Russian army who used Anti-Tank Dogs in WWII, initially trained to leave a timer detonated bomb before being  replaced by an impact detonation procedure which killed the dog in the process. Obliterating all obstacles in their path with no sense of a requirement for self preservation sums up the attitude of Wolfbrigade and crust punks perfectly. A car chase style solo and a bucket of feedback give this one a kick before “Brain-Ruler” gets you in a headlock and charges head first into traffic, the conjoined twin of the opening cut that turns up the energy a notch. The buzzsaw guitars and barked lyrics echo the mentality while the drums provide a metronomic backing that you can imagine switches to a fast and loose style as soon as the band take to the stage. After the pair of shorter cuts, “Necronomium” dials up the atmosphere of classic Metal as a cut that surpasses the five minutes mark with classical solo that make you think it could use a tongue in cheek Judas Priest impersonating video is in order. Who says you can’t teach an old dog new tricks? [7/10]

“Anti​-​Tank Dogs” by Wolfbrigade is out now and available over at bandcamp. 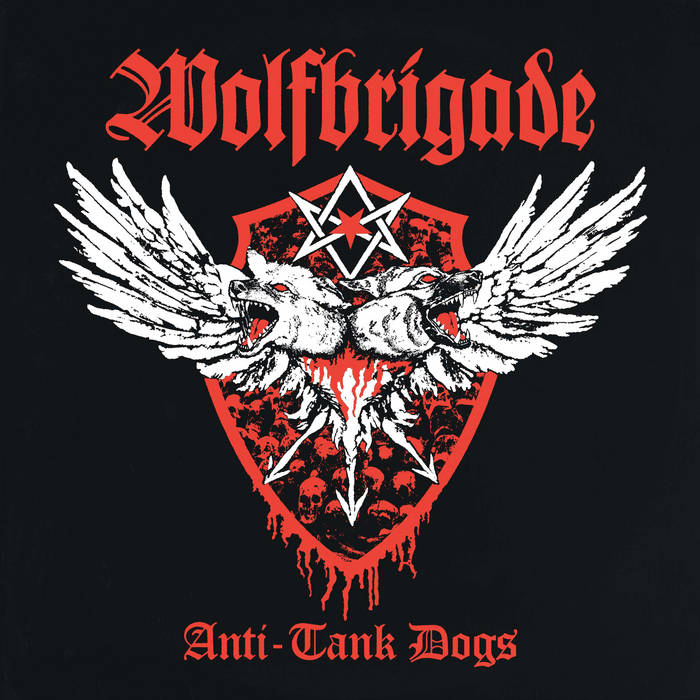