Skip to content
HomeReviewReview: “Of Shades And Colours” by Meteora

The first taste of what “Of Shades And Colours” might sound like came back in 2021 with Hungarian Symphonic Metal quintet Meteora releasing a re-recorded version of the title track from their 2017 debut album “Our Paradise” which features a guest vocal appearance from Jonathan Pellet (Rage of Light, ex-Dysrider). That song paved the way for the ambitious nature of this album, being the first time the band had worked with the grand choir led by Viktor Magyaróvári who feature regularly as they continue to grow further from the group who started some twelve years ago playing covers in the clubs of Budapest. The question is, with this third album can they escape the genre trappings that have thwarted so many and rise like phoenix to soar above the flames?

A journey through Power, Gothic and Death Metal all wrapped in the chains of Orchestration begins with the first of three orchestral introductions in the wonderfully cinematic “Downfall“, the kind of piece that sounds like it belongs to a modern interpretation of Disney’s Fantasia being played out in a grand venue in Vienna. The palate cleanser for the mind that draws into sharp focus opening cut “Wings of Rebellion“, a Power Metal gallop through tales of peasants holding torches aloft as they fight through the darkness with vicious Death Metal unclean vocals from bassist Máté Fülöp offering an day and night contrast to the beautiful clean vocals from lead vocalist Noémi Holló. The cut itself serves it’s purpose in the context of the album narrative but it’s the theatrics of “Danse Macabre” which features a guest vocal from Chris Harms of Lord of the Lost which really grabs the attention. An obvious single, he adds a Gothic touch to a cut that reflects the dance of beauty and beast to stunning effect, the synths from Atilla Király making it sound huge and just as cinematic as the albums introduction. What works incredibly well throughout the album as a whole is contrast of styles within each one of the songs, the band showing incredible musicianship and dedication to their craft as they slickly transition between moments of the Symphonic to Death and back again as seamlessly as a pendulum swing. “Slave of Creation” is no different in that as the band play with light and shade contrasts and dial in a ripper of a solo in the final third which just adds star dust to the flamboyance of the song.

The first of the heavier cuts is “Voices Within” with punchier guitars and more of the brutal unclean vocal passages from Atilla Király it makes the star of Noémi Holló shine brighter by pushing the contrast further, her vocals being absolutely stunning throughout. Guitarist Csaba Solymosi also impresses as he gets through the fretboard work of two players in this single cut, before pulling out another incredible solo on “Newborn Violence” which beggars belief. That one sees the male and female vocals intertwine to great effect, giving the likes of Vanitas or Dakesis who both have incredible female vocalists and play in a similar style food for thought, once again making Meteora the kind of band that you want to witness in the grandest of auditoriums. Mid album instrumental piece “Awakening” sets the stage for the second half of the album in style before “Pests – Tragedy of Delusion part II” offers up an extended theatrical masterpiece that stirs the soul. Sounding like it depicts the rising of a beast from the black depths of the ocean floor with big almost Children Of Bodom styled riffs intertwined with theatrical synths and ethereal vocals from a choir it’s a piece of splendour that will leave you wide eyed with wonder. It works in the context of this setting because they’ve managed to keep it heavy with unclean vocal bursts and a chunky bass sound while the embellishments like a moment of “Für Elise” by Beethoven is a chink of light in the eye of the storm of the song, a near eight minute tour de force showcasing the talents of Meteora.

After that epic, dramatic and majestic masterpiece, “Home” is the return to calm waters after the storm as the guitars, bass and drums fall away for sentimental orchestral and keyboard piece that allows Noémi Holló to sing like a nightingale and the result is mesmerizing with an almost shoegazing quality despite being uplifting. To counterbalance that the heavier aspects return effortlessly and quickly as “Waking Nightmare” rises with the swell as another powerhouse that finds Holló, Fülöp and Király all sharing vocals during the verses. Another piece of epic song writing, it cleverly moves back and forth theatrically with an intriguing blend of heavy riffs, complex vocal arrangements and orchestration that creates a rich depth and texture of sound that is simply jaw dropping. The final of the three orchestral introduction pieces is “Trail to Eden” and the briefest of them, leading into “Immortal“, which has the most ambitious of the choral arrangements while also itself setting up the grandest of grand finales in the album title track, like a river flowing into the sea. In this the band find perfect balance, with a majestic cut that takes every element they have used to compose the album as a whole and pieced it together to form a single magnum opus. From the achingly beautiful vocals from Holló to the rich melody of the synths and the driving guitar work, it’s a mammoth beast on a monumental scale that celebrates all that Meteora are in stunning fashion [8.5/10]

“Of Shades And Colours” by Meteora is out 6th September 2022 via H-Music, formerly Nail Records 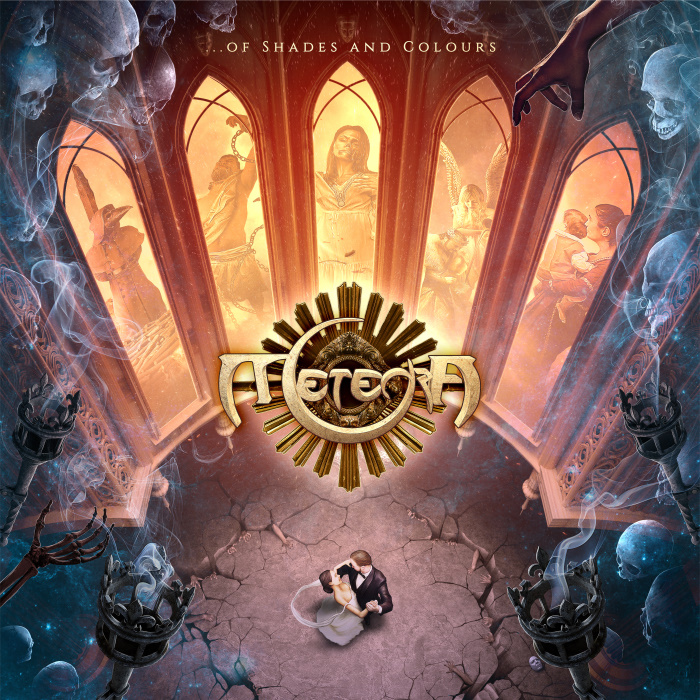 Tags:Dysrider, H-Music, Lord of the Lost, Meteora, Nail Records, Of Shades And Colours, Rage of Light