Skip to content
HomeReviewReview: “The Proffer Of Light” by Praise The Sun

The genres of Melodic Death Metal and Metalcore shall be forever intertwined in Metal History as the Gothenburg sound pioneered by the likes of In Flames, Dark Tranquillity and Soilwork to name but a few evolved into the 2003 era of American Metalcore with the likes of As I Lay Dying, It Dies Today and Unearth leading the way. Sixteen years or so after those events unfolded, Praise the Sun were formed in Warsaw Poland, a female fronted quintet comprising vocalist Marcelina Janik, alongside a rhythm section of Konrad Romanowski on bass and Wojciech Mroziński on drums and an axe wielding duo of Mateusz Zarczuk and Daniel Kowalski. They wasted little time in claiming both genres as their own, releasing debut EP “The Art of Agony” after just a year together in 2020. Re-recording those five tracks alongside six more with Szymon Grodzki (Banisher, Infliction, Chainsaw) at Invent-Sound Studio, who also mixed and mastered, the band now shared their debut album “The Proffer Of Light” with artwork from Dawid Biernat (Mortem, Elegancki Sznyt, Dr Deadlock & Conga Line) at Sanaa Studio…

Rather than bolting the new cuts onto the original EP or simply releasing a sophomore EP, what Praise the Sun have done is take an axe to their debut EP and prepare it as fuel for the fire of their debut album, splitting the tracks up and completely re-ordering them to fit together with the new cuts as each forms a jigsaw puzzle piece to unveil the completed picture as it plays out. Intriguingly enough the album is of a consistent quality to suggest that these songs were all recorded in the same sessions although there is no indication that the cuts on the EP have been re-recorded.

This second chapter begins with fresh but “The Curtain of Life” which utilizes vocal layering to great effect as Janik’s range is fully exposed, intertwining brutal uncleans reminiscent of Alissa White-Gluz from Arch Enemy against beautiful clean vocals to give the impression of a pair of vocalists when there is one. Paired with punchy, aggressive guitar work and percussive drive at an energetic tempo and you have something that captures the imagination. Things continue at a fine pace with the title track of the aforementioned debut EP “The Art of Agony“, Janik sounding like a roaring banshee as she tears through the lyrics like a beast that knows no restraint. The cleans are few and far between on this one, adding an ethereal touch when they do appear. Slowing things down a notch, the mid-tempo chugger “Echoes of Pompeii” feels moodier with more of a 90’s orientated sound and some Kittie inspired moments vocally that give it a delicate grace despite the heavier edges. Those foundations are built upon by “Alive” which takes a page from the playbook of It Dies Today sonically as Mroziński delivers some impressive fills and jackhammer footwork from behind the kit; it actually feels like the band could burst into a 2003 era classic cover at any point of this one. The aggression levels are dialled up for the groove laden “Mistaken Daughter” which has a bombastic bassline from Romanowski and more edge in the scathing uncleans suggesting that there is more behind the lyrical narrative than Janik reveals here, even if she doesn’t mince her words.

If naming a song after your band (or naming your band after one of your songs) means that needs to be one that defines the sound of your band then in “Praise The Sun” the band have created a mid album offering that offers up some Scandinavian melancholic vibes as it dances through Melodic Death Metal leads and a sing-a-long chorus. There are a few points on the album where it takes a couple of listens to understand the clean vocal parts due to minor accenting issues that aren’t present in the uncleans from Janik and “Eternal Dreams” which lyrically is more of a Traditional Metal cut is one of those. Fortunately after a few spins those become part of the albums charm, as does the warm and rich solo that appears on this one. The only issue here is that while there is nothing wrong with any of these cuts in isolation, some of them are a little bit too similar to really stand out from the pack. A heavier breakdown, a thrashier whammy bar solo or perhaps even some synths or orchestration on just one or two of these in the second half of the record and it would go a long way. One of the longer cuts at just over five minutes “The Art of Harmony” offers an interesting play with melodies, the soaring cleans being the finest on the record as once again the band play with vocal layering to give it a beauty and beast edge. Sonically in keeping with the rest of the album as you probably guessed by the title “Metalheads” is the fun cut that talks about how we as Metalheads are judged by the World from the outside with a couple of almost rap-screamed vocal rantings joined by some Thrashier riffs. They think all we drink is the blood of the virgin? All because we are Metalheads? The flamboyance of the solo that brings it to a closing pick slide is pure class [7/10] 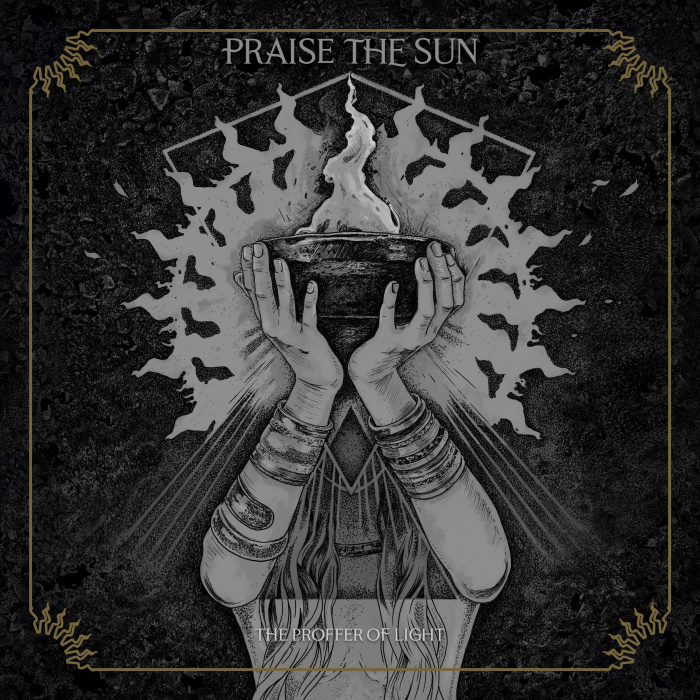 Tags:Praise The Sun, The Art of Agony, The Proffer Of Light