A concept EP of the highest order, “Saturnian” finds multi instrumentalists Logan Dougherty (Guitars, Piano, Orchestration) and Tim Watervoort (Guitars, Basses, Vocals) stretching themselves musically under the moniker of new project Obsidian Skies. A brave and bold record mixed and mastered by Tom MacLean (ex-Haken, Brutta), it finds us talking a journey to the stars in sublime fashion. So here are the thoughts of the duo on their debut release…

“Lyrically, the EP takes place on Saturn’s moon, Titan. In this story, Earth became inhospitable to life and a portion of humankind left the planet to settle on Titan. After colonizing the moon, society began to take shape. Many people could not let go of the thought of all the people left behind on a dying Earth and began to riot. As a result of this, the military presence on the colony dispatched the instigators and enforced a strong, almost dystopian order on the moon. People were at peace, but were not able to live a fulfilling life”

“Musically, in order to convey the story, we avoided a repetitive song structure. The songs move through many sections with motivic references throughout to tie it together. Many different instruments carry the melody, including fretless bass and piano. As a whole, the most technically complex part peaks in the middle of the EP as the story climaxes. Our guitars are tuned in drop C, but we didn’t let that limit the tonal centers that we could explore”

1. Celestial Age: “In this track, humankind first leaves a dying Earth to settle on Titan, the largest moon of Saturn. Astronomers have predicted that in our solar system, Titan would be the best second home for humanity. The settlers are awed by the sights they see, such as a gas giant on the horizon. It seems that hope has been restored for the human race, but the settlers still lament their former home”

“The track begins feeling more like doom metal with a droning quality. Most of the song is in 6/8, giving it a more flowing feel. Many parts, including the chorus, are more rhythmic, but there are absolutely trance-like sections throughout the song. The song has many instrumental sections, but both clean and harsh vocals are used. Harmonically, the song has many instances of “pivot points”. In the section starting at 4:34, for example, the harmonies pivot around a tremolo-picked “C” to maintain that droning quality”

2. Rebirth in the Stars: “Following the events of “Celestial Age”, humanity has established a functioning colony on Titan. People have jobs, life is flourishing, and it seems that humanity will rebuild. However, there are those that cannot look past the fact that these people chosen to live on Titan seemingly abandoned the rest of humanity to their fate on a dying Earth. These people riot against what they see as a facade of what used to be and cause untold damage to the colony. The military power in the colony organizes and quells this insurrection, and instills a very strong regime of order. Everyone is once again at peace, but people do not live fulfilling lives. At the end of the song, a new speaker calls for riots against this oppressive dystopian regime”

“This song has a much darker quality to it than “Celestial Age”, relying heavily on parallel minor chords. Much of the song also has a more technical feel to it, drawing inspiration from Classical era music. The harsh vocals are much faster in this track, giving many sections a very frantic feel. The tempo of the song as a whole is higher as well. The orchestra is featured heavily in this track, with a four-minute orchestral section in the middle of the song. It explores much of the thematic material introduced by the traditional metal instruments. Rhythmically, this song features many changing time signatures and some metric modulation to shift between tempos”

3. Home: “This song is less of a story, but more of one man’s lament for his former home and the exploration of his emotions. He begins by expressing that nothing he sees around him in this new place can compare to his lost home. While he may live and breathe here, none of the lands he sees have been “colored by stories and songs”. As the song continues, he notes that while the end of the world took away much of humanity’s achievements, it preserved our stories and our pasts. The song concludes with him acknowledging that he and his peers have a unique opportunity to write new songs about a new home”

““Home” provides a more intimate setting, beginning with an acoustic guitar. The vocals have more presence in this song than in the previous two and distorted guitars do not enter until halfway through the song. Much of this song feels like one that could be sung around a campfire, thinking of days gone by. When the distorted guitars enter, they serve more to provide foundation than a true featured part to keep with the aesthetic. Harsh vocals are present in this song, but to a much smaller degree than the previous two. Harmonically, this song features jazzy major 7th chords to give it a warmer feel”

“During the COVID-19 pandemic, working on this EP was one of the things that kept us sane. We went through job losses, large life changes, and mental health struggles during this time. The writing was very therapeutic for both of us and it feels amazing to see this EP come to life. After the breakup of our previous band, it’s great to be able to work together again and produce some of the best work either of us has ever done. We’ve both always seen music as an escape and we bring that into our lyrics. The entire story of this EP takes place on Saturn’s moon, Titan, as humanity leaves a dying Earth and struggles to start anew, echoing the struggles of this pandemic.

We’ve both challenged ourselves with this EP, both as songwriters and as instrumentalists. It’s resulted in something we’re beyond excited to share with the world, an EP that really shows who we are as musicians. From heavy rhythmic sections to sweeping orchestral melodies, we feel we’ve touched on a large part of the musical spectrum with this release” ~ Obsidian Skies 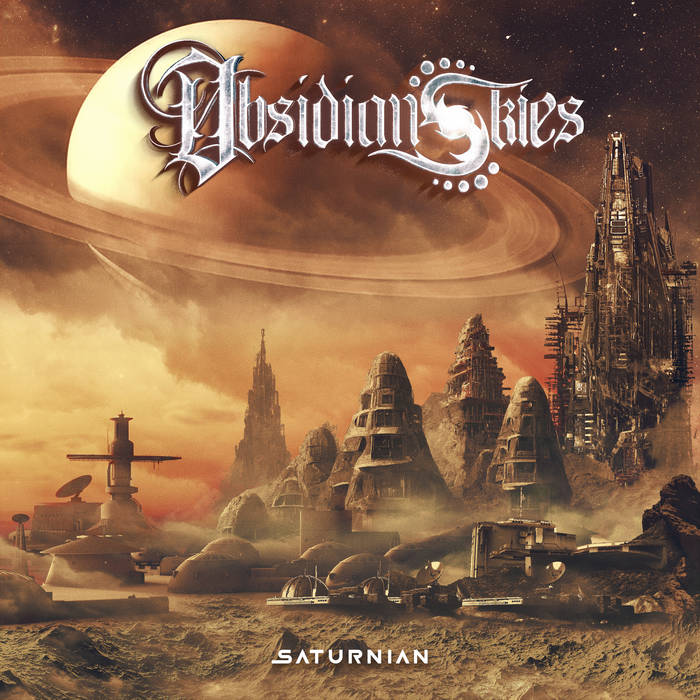