After last weeks glorious first interview with Renunciation bassist extraordinaire Vadim Kotov, it is time once again to return to Moscow Russia for a second conversation. Having spoken about the desire to write intricate Technical Progressive Blackened Death Metal in the project the first time around, this time we go in deep on the bands perfectionist approach when it comes to writing masterpieces like their recently released “Autelmorte“!

How did your previous experiences writing and recording  help to smooth the path of the new record? “It helped in all ways. In how often to check the guitar tuning, how to simplify some unplayable parts, how to avoid too sleek sound etc. But we also have a lot to work on, Autelmorte contains some defects that appeared in the recording process. As regards composing, we strived for more clear structures and more slight transitions between parts. But there are several claims to ourselves that we plan to manage in the future. But despite what has been said, we are satisfied with the current progress we made as composers and performers”

How does the writing process of a new track start? Melody, riff or rhythm first? How does it evolve from there before you consider it the finished article? It depends, but most often everything starts with harmony and chord progressions. Classic metal riff approach is cool, but our music is mostly tonal, if you know what I mean. Then some other ideas and structures appear in our heads and at one moment we understand that the framework of a new song is ready and then comes the hardest part: filling the blanks and matching everything together. The problem is that our music sounds like this much because of complex chord progressions and their ‘glueing’ is always hard. This process looks more like solving a complex problem with trying different options and even changing the inputs. Sometimes work on one 5-second transition can take 3-4 weeks and during this work not only this part but half of the riffs and melodies change. Also it’s very important to return to finished songs in several months and look at them with fresh eyes”

Do you consider yourselves perfectionists? If you look back on previous works, is there anything that you would like to go back and change or is it very much pushing forward to make the next thing better and learning from the experience? “We are perfectionists, especially me as the main author. But at the same time we know when to stop: to release an album you consider 95% satisfying is better than polishing the remaining 5% for years. As regards previous experience, we see many defects and mistakes in our previous works: in composing, in arranging, in recording etc. But at the same time we know that we couldn’t make it better at that period, we were at the limit of our abilities. We admit the mistakes but are not ashamed of them, they are a natural way to develop. Banal philosophy but it works”

If you had the opportunity to work with a guest in the studio next time around, who would you like to work with and why? “It would be cool to invite Dave Hunt from Anaal Nathrakh as a guest vocalist, both extreme and clean singing, we love his vocal timbre. Also we’d be glad to work with guys from Akercocke, we feel that their music vision is close to ours”

For us gear nerds out there, can you tell us what you’re using gear wise (pedals, strings, drums etc) to get your sound? “We are not gear nerds at all, the recording process was very simple: Ibanez RG2228 guitar (yes, we sometimes use the 8th string) and Ibanez SR305 bass (Elixir strings for both) were recorded DI via Focusrite Scarlett Solo 3rd gen and then reamped in Logic by our mixing engineer. Vocals were recorded using a Shure SM58 wireless microphone also without any effects and then added to mix. Pink Floyd would look at us with contempt. As for the drums, we decided not to record them live this time”

What difference would it make to you as a band if you could land an endorsement from a gear manufacturer? “As far as we know, really interesting endorsement deals get only big artists. At our current level we can expect only a 5-10% discount for purchasing the endorsed brand production. We don’t think that such ‘sop’ would affect anything besides the musician’s ego”
“Autelmorte” by Renunciation is out now and available over at bandcamp. 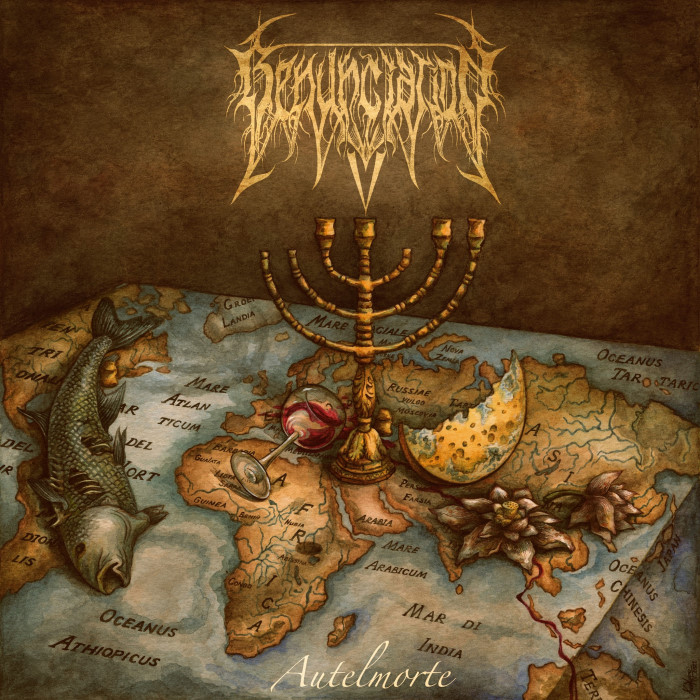