Skip to content
HomeReviewReview: “This World is Suffering” by Demoralizer

In 2019 a crack commando unit was sent to prison by a military court for a crime they didn’t commit. These men promptly escaped from a maximum security stockade to the Harderwijk, Netherlands underground. Today, still wanted by the government they survive as soldiers of fortune. If you have a problem, if no one else can help and if you can find them, maybe you can hire Demoralizer…

Since when has forming a band from the ashes of others and aspiring to create a contemporary form of Death Metal with elements of groove and hints of melody been a crime against humanity? That’s what guitarist Yuri de Wolf, vocalist Reinder Dorman, bassist Jacco van de Haar and drummer Pascal Payens have done with their debut record “This World Is Suffering”.

Stopping just short of 21 minutes should mean that we get something distilled down to its purist form with no time to waste from a band with a bloodlust for Death Metal and in their debut burnt offering to the Metal Gods “This World Is Suffering” that is exactly what Demoralizer have given us. Opening cut “The Stones of My Tomb” sounds like a demo from “Chaos A.D.” era Sepultura with an stirring science fiction themed introduction that boils over into a mid tempo pulveriser with a sinister edge, the bombastic bassline spilling into a vibrant and unexpected solo. Dorman is clearly an accomplished vocalist, his range and prowess giving the band the opportunity to play with atmosphere and in instrumental “Unmasked” he helps set the tone for the skull battering “Silence” with some banshee wails like a demon’s cry on the plague wind. Blast beats galore from Payens shatter any illusions that Demoralizer maybe caught in the trap of 90’s Death Metal making way for a Jazz inspired solo and Progressive Metal passage that echoes Rivers Of Nihil with the Modern production and clean, crisp drum sound giving it more edge.

The powerhouse performance of the record has to be “Alive to Die” which is no doubt why it was given the full music video treatment; a banger from start to finish with all the elements you could possibly want, it is the metaphorical flasher that leaps out to surprise you in the dead of night. A cut that speaks of the dissatisfaction we all feel with life at times, it takes the idea to the next plain of existence before running us off the road an into the ditch with another fretboard smoking solo and we still haven’t reached the title track. That happens to be a bombastic piece of Death Metal accompanied by an almost feral vocal performance and yet still has at its heart a moment of Progressive Metal that astounds. The transitions are slick, the bass sound huge and the rhythms soaked in blood; the surprise is that there is absolutely no accenting in the vocals across the entire record to the point that if you didn’t know better, you’d swear the band were from Denver Colorado. Another strong offering but perhaps no as bedlam inducing as the title might suggest “Children of Armageddon” actually falls in similar territory to bands like Between The Buried And Me with another wonderfully rich textured and wholly unexpected solo lifting everything to another dimension before bringing it back for another lethal dose driven verse [8.5/10]

“This World is Suffering” by Demoralizer is out now and available over at bandcamp. 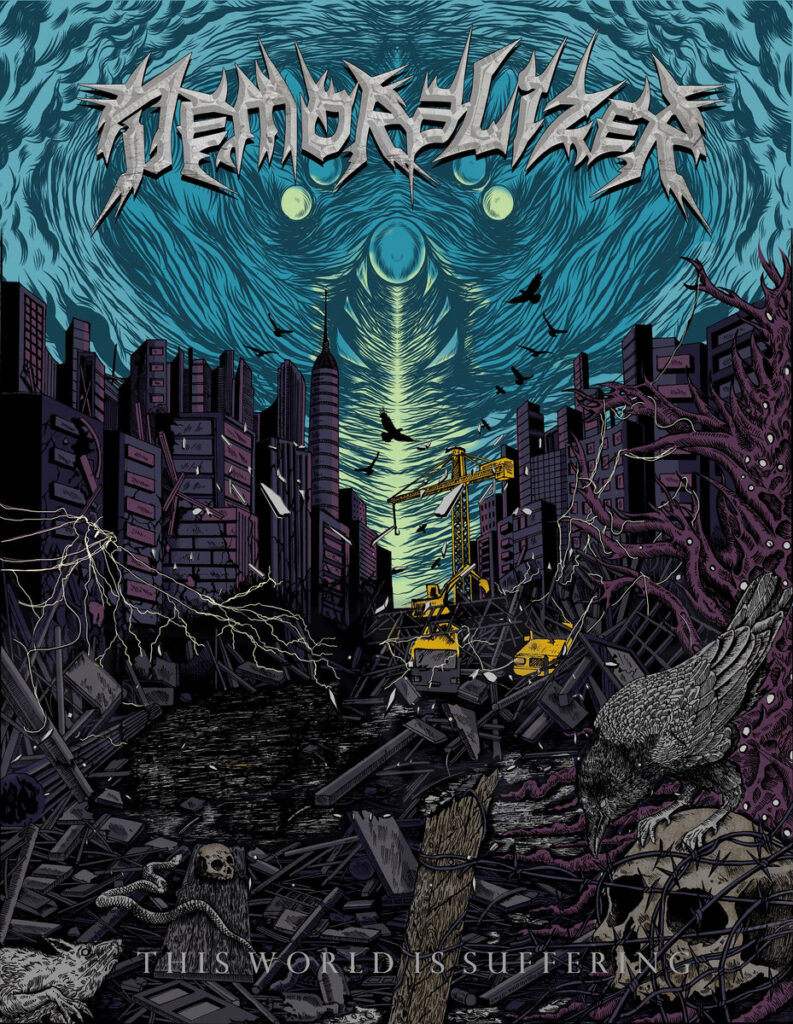 Tags:Demoralizer, Rivers of Nihil, This World is Suffering