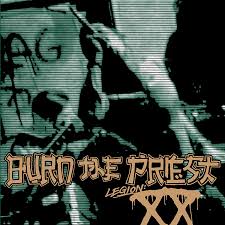 Lamb of God have released an animated video for their cover of “Jesus Build My Hotrod” by Al Jourgensen’s industrial legends Ministry. The surprise inclusion on the hardcore punk covers album “Legion XX” released under their original moniker Burn The Priest is a fine addition to their catalogue. Check out our review.
Read More

Just three short years ago in 2015, Lamb Of God ripped it up at Rock In Rio. They don’t come much bigger that the annual Brazilian celebration of all things Metal and watching the fans go crazy on a huge scale for their anthem “Redneck” must have been a special moment. Lamb Of God have
Read More

18th May will see Lamb Of God release their 20th Anniversary hardcore punk covers album “Legion: XX” under their original moniker Burn The Priest. Following on from the previous two song pre-release teases, the latest is their cover of Bad Brains “I Against I” which Randy Blythe got plenty of practice in for when he
Read More

Lamb of God have released the second full track from their upcoming hardcore punk covers album “Legion XX” that will go out under their original moniker Burn The Priest. Frontman Randy Blythe also spoke to Revolver Magazine about the cut of Big Black‘s “Kerosene” and in the bands influence. “Legion XX” will see release on
Read More

As many will know, Lamb of God are releasing a covers album entitled “Legion : XX” under their original moniker Burn The Priest to celebrate their 20th anniversary. The album will appear on 18th May and feature the following tracklisting; 1. Inherit The Earth – The Accused 2. Honey Bucket – Melvins 3. Kerosene –
Read More