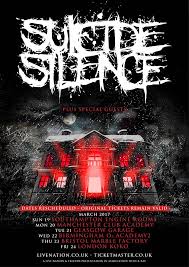 Suicide Silence… The myth, the legend, the talking points. Personally, I like the self-titled album. So much so that I went out and saw them play this set at Southampton Engine Rooms with support from Venom Prison and Deez Nuts. A full set recorded at Yotaspace in Moscow on 15th March 2017. Phenomenal.
Read More