Accompanied by a music video directed by Max Moore (Code Orange, Coheed And Cambria), a new three song EP from Canadian Alternative Metal act Spiritbox has surfaced via Rise Records in “Rotoscope”. Featuring the new tracks “Sew Me Up” and “Hysteria“, it primes the band for a run of big venue shows with Ghost,  Mastodon,
Read More

Ahead of their summer Festival run, Canadian Alternative Metal act Spiritbox were caught on camera at the O2 Academy in Islington London on 14th June. Part of a run of shows around their current album “Eternal Blue“, it has surfaced following the somewhat surprising news that the band will be joining Ghost and Mastodon for
Read More

Courtesy of Iron Serbian for Capital Chaos TV, a pair of cuts from the set of Spiritbox in “Rule Of Nines” and “Hurt You” at Warfield Theatre in San Francisco California have joined the growing number of well received live material now that shows are getting back to somewhere approaching full throttle. Their long awaited
Read More

Filmed at The Hallway Studios in Los Angeles California by Alex Bernis, Spiritbox guitarist Mike Stringer has laid down a guitar playthrough video for “Secret Garden“, a cut approaching the 5m Spotify streams mark, using the new Neural DSP Quad Cortex and a capture from an Omega Granophyre 100 watt head. The guitar itself is
Read More 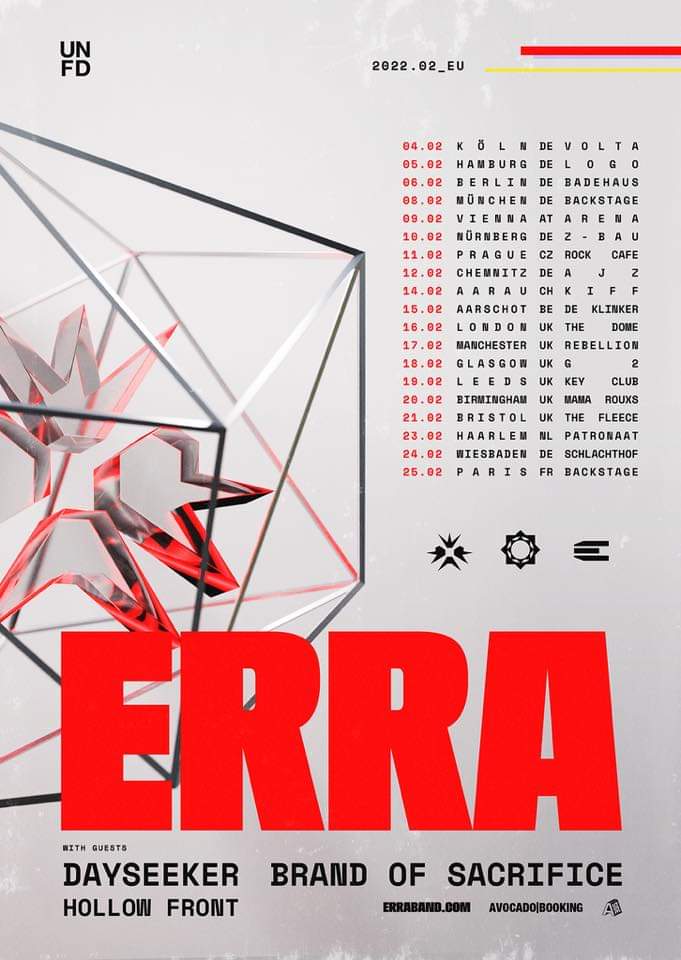 Having never had a guest join them at any point in the past decade, Birmingham Alabama’s Erra have unveiled an updated version of “Vanish Canvas” that sees them joined by Courtney LaPlante of Spiritbox as both a music video and in all the usual outlets. The original version of the cut that appears on their self
Read More

Following Courtney LaPlante’s guest vocal appearance on the DJent fueled new single from Crown The Empire, Rise Records have decided to offer up a fifth single in “Hurt You” from the highly anticipated and long awaited album “Eternal Blue” by Spiritbox. That will finally drop on 17th September, which still seems like eternity away but
Read More

Well, well, well. Three holes in the ground. We did not see this coming. Not only have Crown The Empire returned with a DJent fueled new single but somehow they have managed to convince Courtney LaPlante of Spiritbox to drop a guest vocal on it. The cut is called “In Another Life” and has premiered
Read More

…with “Eternal Blue” out via Rise Records on 17th September being preceded by four instantly available singles on pre-order, Canadian trio Spiritbox had to do something special to bridge the summer long gap. So Courtney LaPlante and Mike Stringer have recorded a stripped down acoustic version of “Constance” with a string trio that is also available
Read More

After the surprise news that they will be providing main support to Limp Bizkit for a run of shows in August dubbed “The Last Minute Post Pandemic Pop-up Party Edition“, Vancouver Canada’s  Spiritbox have let drummer Zev Rose take a moment in the limelight with a drum playthrough of “Circle With Me”. The will appear on
Read More

It seems like Spiritbox is the name on everyone’s lips at this moment in time and vocalist extortionate Courtney LaPlante has been laying down the guantlet with guest appearances left right and centre. Her latest sees her join like minded Australian’s Make Them Suffer for their new single “Contraband” which has surfaced via Rise Records.
Read More