“Forgiveness is the hardest part, It drives to the core of who we are, But I’ll do this for me and never for you, I’ll never forget who you really are”
Read More

After almost 12 months of silence, Gloucestershire Progressive Metalcore merchants The Uncharted have returned with new single “Infinite“, one which has already premiered on Kerrang! Radio. Recorded and produced by Dan Kerr at Avenues Studios it’s their first new material since 2019’s “Serenity” from the 14 legged monster who we last saw sharing the stage
Read More

Having put in their shot for an appearance on the next Punk Goes Pop compilation from Fearless records with a cover of the Dua Lipa song “Cool” at the beginning of the month, Melodic Metalcore merchants The Uncharted celebrated the 2nd anniversary of their first single from their debut EP “Perspective“‘ that goes by the
Read More

Staking their Vocalzone and Ernie Ball Strings endorsed claim for a place on the next Fearless Records “Punk Goes Pop” compilation album, The Uncharted have used their free time to record a cover of “‘Cool” a Dua Lipa which would make Sumo Cyco proud. As usual, they’ve got Daniel Kerr at Avenue Studios to handle
Read More

Recorded, Mixed and Mastered at Avenue Studios by Daniel Kerr (Create To Inspire, Shields), friends of Our Hollow Our Home, 14 legged Gloucestershire Metalcore band The Uncharted have dropped a new single entitled “Closer”. There third single since 2018 EP “Perspectives” it’s not a tribute to Nine Inch Nails.
Read More

Not happy with dropping one lockdown themed track, Chuggaboom have tapped up members of InVisions, Our Hollow Our Home, The Uncharted and more for their second offering. Entitled “Chuggflix and Chill” it blends Metalcore and Nu-Metal with a sense of humour while the members of the guest bands hold up hand written lyric sheets and
Read More

Guitarist duo Josh Finch and Joe Pronini from Gloucestershire Progressive Melodic Metalcore outfit The Uncharted have been filmed for a playthrough of the bands latest single “Serenity“. They’ll be on the Amped Road Trip in March with Cabin Boy Jumped Ship and Red Method (in conjunction with the release of their debut album “For The
Read More

As their 2018 EP “Perspectives” moves past the 200k streams mark on Spotify, Gloucestershire 14 legged Progressive Metalcore crew The Uncharted have released a new single entitled “Serenity”. They’ll be joining TheCityIsOurs for the “Low” album release tour later this month before getting the Amped Road Trip in March!
Read More 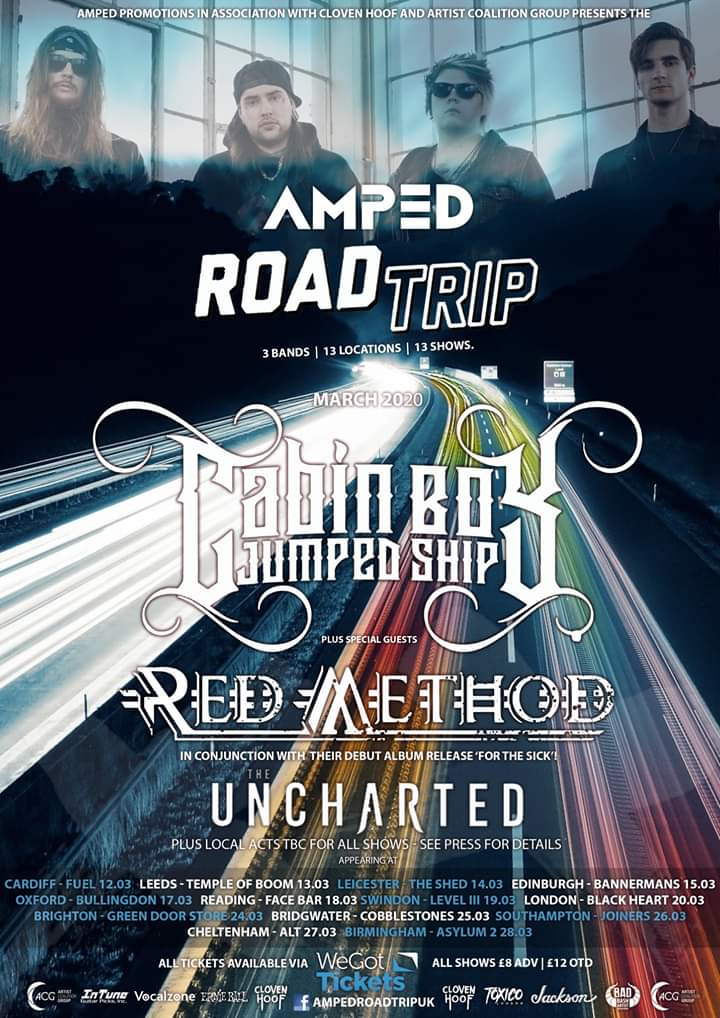 The Amped sponsored Road Trip Tour is set for March 2020 with headliners Cabin Boy Jumped Ship joined by Red Method and The Uncharted with at least one local band opening each night. The run of 13 shows will coincide with the release of “For The Sick”, the debut full length album from Red Method
Read More