Sometimes you don’t recognize a good thing until it reaches up and slaps you across the face and Australian’s Nemesium, who built their foundations around a love of the 90s Scandinavian scene that leeches out in their material are a fine example of that. The cover art from Kirill Semenov is intriguing but it’s only when you press play that you come to realize just how good this band actually are. Elements of Black Metal, old school and Progressive Technical Death Metal combine on their freshly released album “Continua” that gives it a timeless quality and something that Black Lion Records weren’t about to lose out on the opportunity to distribute. A hybrid that avoids the many pitfalls of trying to put something like this together by having a longer gestation period and really focusing on getting the sound that they wanted, “Continua” is without a doubt an album that will propel the band far beyond their homelands. We had the glorious opportunity to ask them a few questions and they graciously took the time out from their lives to do us the honour of answering them. Here’s what they had to say…

We have to say that the new album “Continua” is an absolute Monster! Obviously five years have gone under the bridge since 2015’s “Sentient Cognizance” EP so we were intrigued as to the presence of a re-recording of “Annihilation Prophecy” appearing on the album. The new version is 15 seconds longer so what was behind the decision to re-record it? Well first of all thank you for your comments! We wanted to created a monster of an album and I think we achieved it. When we first recorded “Annihiliation” on our EP “Sentient Cognizance”, we were never really happy with the way it came out. And we always knew it was one of our stronger songs just from fan reaction alone. So we wanted to do it justice by changing parts here and there and then putting a new overall sound to it. And I think we achieved what we were after.

At the start of “All For Them” there is a part we’ve called a “funky bass drive” in our review, something which we didn’t really get the feel for the first couple of times around but we’ve grown to love about the record over multiple listens. In the context of the album was it intentional to have parts in the record that make it a challenging listen or was that something that just came about naturally? We definitely took that element into consideration when we were deciding on the order of the tracks and the flow of the album. Some of those sections grew very naturally out of rehearsals, developed from a single riff or beat. Others were more “composed” to serve a purpose within the song and then brought in to rehearsals. I don’t know that it was our intention to challenge the listener as such, more to do with challenging ourselves.

Over the past 5 years you’ve shared stages with the likes of Sinister, Krisiun, Undergang, Omnium Gatherum, as well as Aussie legends Psycroptic and King Parrot. What was it like to play those shows and how did those experiences impact on yourselves and influence you going into the writing and recording the album? All of these shows were an honour to be playing with such prestigious bands. The Sinister show was actually our first ever show we played as a band back in 2015. Being asked to play these shows itself was amazing and with each show we play we try harder and harder to become more tight and put on a hell of a show. Recording of the album we have taken elements of all Metal and researched all recording methods and have self produced this album which we tried to keep the old school feel but with modern elements. We all took something each from playing with these pioneers in our music industry. They’re top bands for a reason.

For us one of the stand out tracks on “Continua” is “Cloud Chaser” which has a timeless quality that gives it an instant warmth. Do you think there is too much clamour for everything to sound “fresh” and “new” and “modernized” in the current Metal climate? 100% Nearly everything coming out nowadays is very modernised/edited and it’s losing that old school metal feel. I guess with the technology we have nowadays it makes things very easy to computerise everything. Not many bands can pull off what they actually record so if they are doing these edits and can play there record flawlessly live. Good on them! But the end of the day it’s each to there own, so us older metal heads still love that old metal feel and anyone younger up and coming that can appreciate that and keep the torch burning. Cheers!!!

The attention to detail in the album is second to none and it’s pretty clear that you’ve worked and re-worked parts of it to make it into the Technical Death Metal beast that it is. How have you found the feedback on the album since it has been out in the World? Has anyone picked out anything that you didn’t notice or didn’t occur to you when you recorded it and if you could change one thing, what would it be? This album was a few years in the making so it definitely did get nit picked. We also changed bassists right before we were about to record the bass too so that all had to be re write, thankfully our new bassist is a virtuoso. The feedback so far has been amazing! We have been blown away of everyones commments and reviews and we are taking note of what everyone is saying negative or positive. But overall we are thrilled. There’s nothing really that has stood out that someone has said that we didn’t notice, some have disliked the 2 instrumentals but others have said they’re a good breather. So its basically just been good to put an all round mix of metal genres into this soup of an album.

If a big name publication – lets say Metal Hammer or Decibel Magazine or something – came to you and asked you to do a cover song for a “Metal Through The Ages” compilation, what would you choose and why? Wow……..Well personally I’m a big Melodic Death Fan so I would choose something from the Swedish scene from the 90’s So maybe an A Canorous Quintet or Eucharist cover would be amazing. I grew up and still am a die hard Swedish Melodic Death fan and these are the bands that pioneered this sound and my first bands I got into. So it would be a great way to honour these guys.

What does the future hold of Nemesium? Have you got any irons in the fire just waiting for the right moment? Well before all this COVID stuff started happening we were planning on touring Australia and are looking into touring Europe and maybe the USA. But everything is on the back burner now until all this crap calms down. But that’s not stopping us from writing and rehearsing every week, we have already started writing for our next album as we don’t want to slow down.

“Continua” by Nemesium is out now via Black Lion Records and is available over at bandcamp. 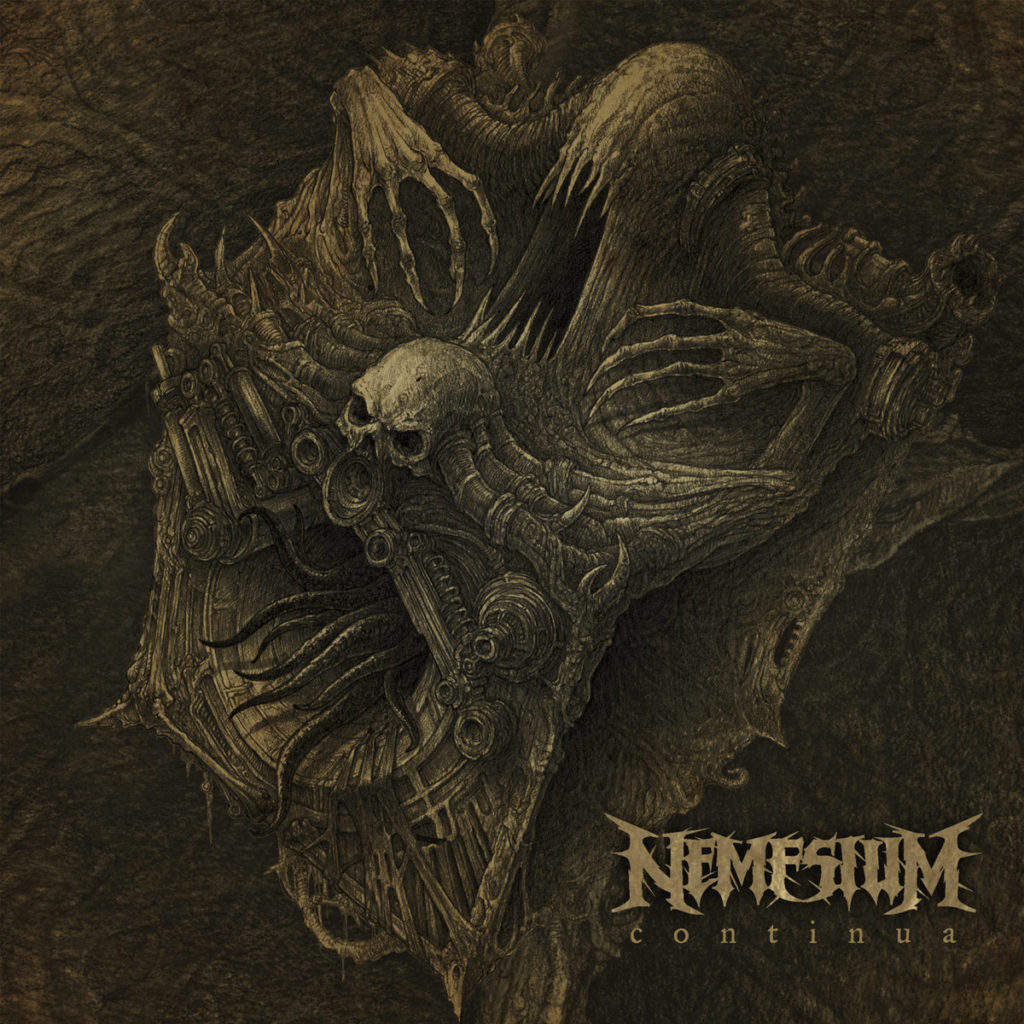