Just 3 days short of 4 months is how long it has been since we were last able to bring you a review of a live show. That was 8th March as we saw Gutlocker  with Arimea, Transients and Weaponry at The Metal 2 The Masses Quarterfinal in Oxford and frankly, it feels like a thousand years ago. Tonight sees Corby’s finest Raging Speedhorn perform at our favorite of live venues in Camden Underworld but with a twist. They’re live streaming their set via Hotel Radio so we can watch from home for a princely £3.99 pay per view style while the band offer an exclusive pre-order t-shirt for the show. We last saw the riff merchants play a packed Camden Electric Ballroom for a 20th Anniversary show that saw their original line up re-group for one last time back in October 2018. They have had a couple of line up changes since and set their sights on bringing a new record to the fans with a decent amount of shows between then and now, including tearing up Bloodstock last summer.

The line-up that takes the stage tonight is Gordon Morrison (drums), Frank Regan (vocals), Daniel Cook (vocals) and Dave Thompson (bass), who are joined by guitarist duo James Palmer and Dave Leese. That makes Regan and Morrison the only two original members left in the band, hardly a surprise as priorities change in live 22 years after the mayhem started. Bathed in blue light, Raging Speedhorn’s vocal duo stalk the pit in front of the stage beside a bar table in the pit with a couple of beers and a bottle of wine on it, scream along to the onslaught of Sludge Metal riffs. Twin cameras either side of the  venue’s famous “cicle pit” pillar seamlessly cut it out with a third situated above the stage looks down on the band rocking out. The lack of fans sees both vocalists playing up to the cameras asking the at home audience to get off their sofas, while the sound quality is nothing short of brilliant, especially during a raging “Superscud“. The new line up’s playing is as tight as any live show you’ve witnessed and we’re treated to a couple of back to back tracks from the new currently in the works album, one of which we’re going to christen “Hard To Kill” as the band don’t mention the name. “F*** the Voodooman” sees the band hit their collective stride and fortunately Hotel Radio’s “On Air” light doesn’t get smashed despite Regan playing about with it. A third new track in the set is killer and the new album is set to be a stormer and by the time “Thumper” hits, the band are clearly loving it, despite the absence of fans in the room. 50 minutes of Corby’s Sludge Metal Kings has only served to whet our appetite for the return of live music and the new album, as mad as the comment section gets during the show, it’s no match for a sweaty mosh pit, pints and chants of “one more song!” [10/10] 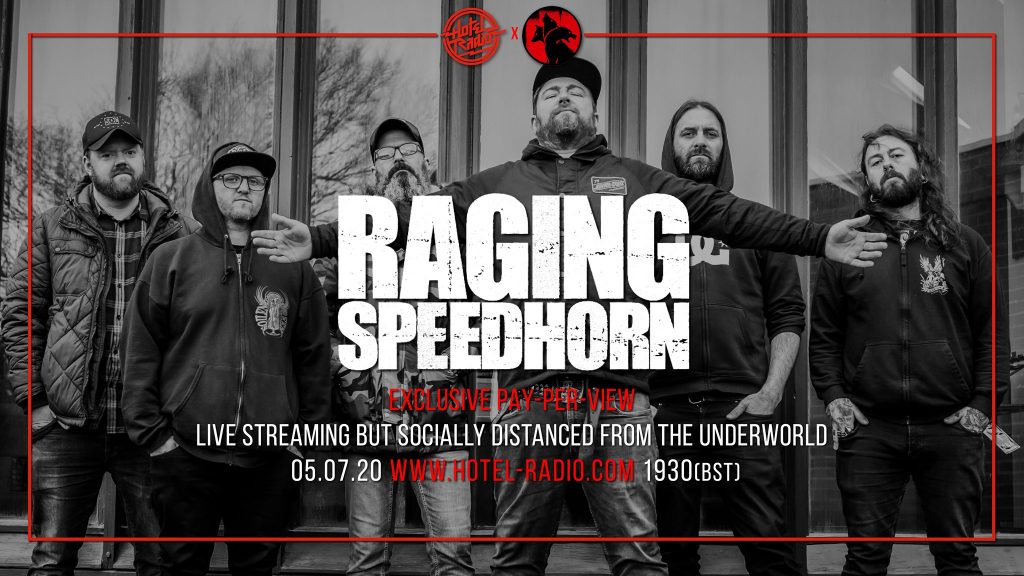 Tags:Before The Sea Was Built, Bloodstock, Lost Ritual, Raging Speedhorn, We Will Be Dead Tomorrow