Originally planned as a 7 track long player with influences in Deathcore, Hardcore, Beatdown and Slam genres, Calgary Alberta Canada’s Mace (Brock Brown, Max August, Rylie Clare and Austen Lewis) started work on “Paranoia” back in October of 2019, following up a 9 track demo debut album and standalone single “Corruption“. The band had been recording with Scott Oliphant from Colossus Audio Productions (Infidus) at his home studio, where he produced, mixed and mastered the tracks that would eventually wind up on the release, including “Narcissist” which features a guest vocal appearance from Jesse Bartlett of Infidus. That track was released a month before the record with all funds collected from the purchase being donated to the Minnesota bail fund, a community based nonprofit organization formed in 2016 that combats the harms of incarceration by paying bail for low-income individuals who cannot pay for it themselves…

…the sounds of a couple having a fight, a woman screaming at her man, start “Narcissist” off before a nauseating atmospheric kicks in that builds through Hardcore into Deathcore with a brutal post first verse guttural that threatens to shatter the windows of every building in 20 yards of it going off. A screeched vocal then sets the pit off before a final pre-Slam Deathcore part that is just off the hook. The ‘Mace’ sound is pretty well defined in these tracks and “Solitary Confinement” has a glorious funky bass drive part in between verses of barked Hardcore vocals before building back into that Deathcore ruckus. “Ashes Of Agony” has some early Hatebreed influence while having the chunky bounce and Metallic Hardcore tones of bands like Extortionist and the vocal balance between the bark and bite is something that makes the band more than the sum of their parts by satisfying that urge to go all out and hold nothing back. “Affliction” then changes direction and brings with it a haunting, eerie melody that builds delicately with some big drum sounds for the first 90 seconds before the nightmarish vocals kick in for a single verse of demonics. It may well be a track that starts off the bands live show by building a sense of tension among a crowd before setting it off like a Molotov cocktail. “Paranoia Is Our Plague” is a chugging ripper with a few KoRn isms that you might not have expected before an ugly slam verse and brutal double kick drop that is a Mortal Kombat finishing move. This EP is deadly, a blend of styles that play off each other with more twists and turns than a Hitchcock movie [7.5/10]

“Paranoia” by Mace is out now and available over at bandcamp 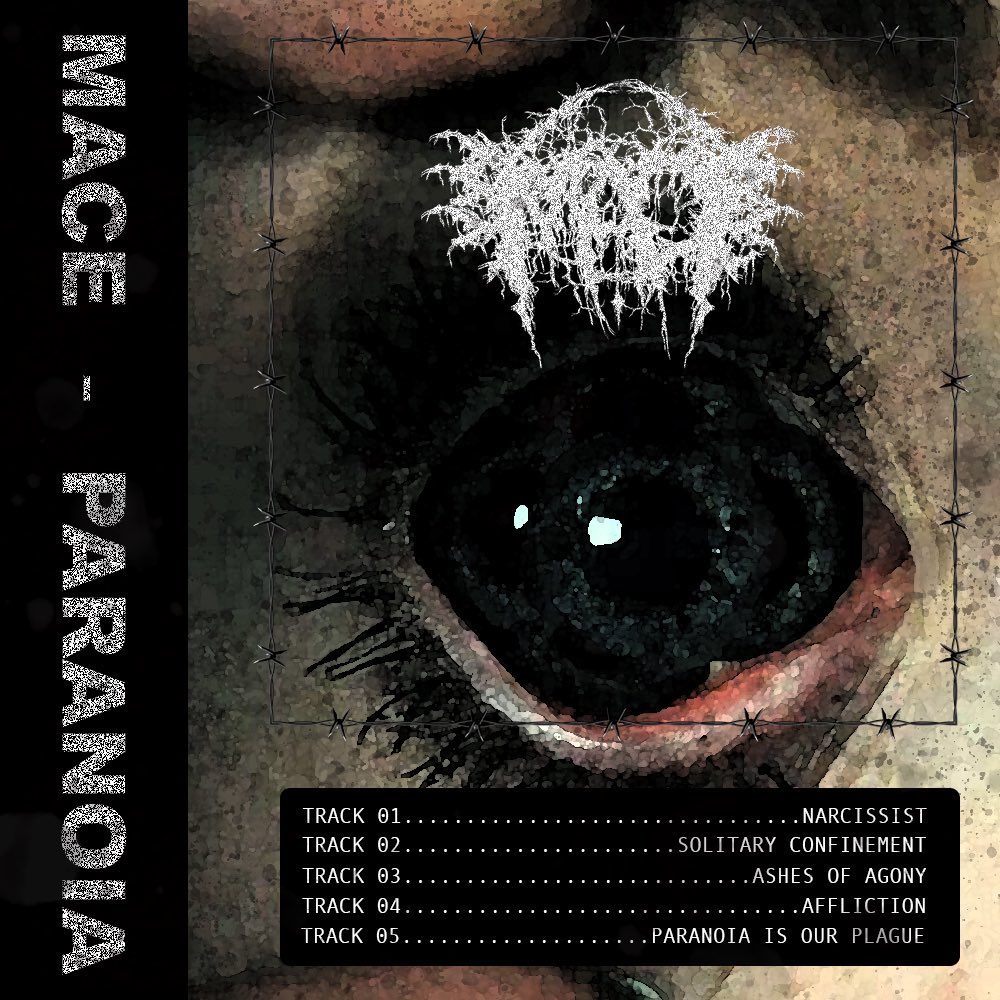