Together guitarist Jeremy Cronk and drummer Paul Drake Jr. are Lucius Fox, an instrumental duo from Kalamazoo, Michigan who have spent the past six years at the grindstone creating complex music that moves between Metal sub-genres with consummate ease. Each release they have created together has followed a theme or concept and their latest offering “Red Giant” is no different covering the subject matter of an ancient ship-sinking weapon designed by Archimedes, a huge carnivorous prehistoric whale and the sun engulfing the inner planets in 7.9 billion years…

How have you found the reaction to your latest sonic creation, the concept EP “Red Giant”?

Jeremy: “We’ve been blown away by Red Giant’s reception! We’ve had some incredibly positive press and feedback, as well as a few track premieres in advance of its release. It is awesome seeing our music make its way to new listeners and seeing it resonate with others”

As a duo, what drew you to writing instrumental music when you started out? Who were your inspirations when you started and who do you enjoy listening to now? Have you ever considered bringing anyone else into the fold?

Jeremy: “When I first started jamming with the original Lucius drummer, Alex, we would spend a lot of time improvising. We’re good friends dating back to kindergarten and following college we reconnected through music. In 2014 I booked a couple of shows by myself to play some more typical singer-songwriter type songs and asked him if he’d play those shows with me. We quickly found that we were more interested in playing instrumental music and our music gradually became heavier and heavier. I have always enjoyed instrumental music and was inspired early on by Hans Zimmer. In my teens and early 20s I was absolutely blown away by the scores from The Dark Knight Trilogy, Inception, Man of Steel and later on, Interstellar. When we decided to become a fully instrumental project Hans Zimmer was one of my primary influences. As far as more rock and metal based instrumental music goes I love Russian Circles, toe., ASIWYFA, If These Trees Could Talk, Infinium and Charles the Osprey. Some of my other favorite artists are The Mars Volta, John Frusciante, Baroness, BTBAM, Mastodon, Deafheaven and Inter Arma. I’m always looking for new stuff to listen to and try to primarily listen to music from the current year. From a writing standpoint, I’m regularly influenced by science. I’m a high school science teacher and currently a masters student studying science education, so I’m immersed in it. We’ve played a few shows with our good friend Brian playing bass, but these were either early on before we’d really settled on the type of project we were going to be and a super fun Rush tribute set where he acted as our Geddy Lee. Lucius will always be a two piece though. Writing and performing as a two piece has pushed me to become a more creative writer and I love the challenge that it provides. Plus our band group chat is just a text message between Paul and I!”

Paul: “I feel like it’s a lot more creative to tell a story or make people feel a certain way with just music vs music/lyrics. Inspirations span a wide variety of artists, such as Daft Punk, Russian Circles, Tigers Jaw, Modest Mouse, Gojira, Pinback… the list goes on. Lucius Fox WILL ALWAYS BE A TWO PIECE.”

We’ve described your music as having a film score or cinematic vibe to it, always being on the move and offering new things. If Hollywood came knocking on your door, what kind of film would you be attracted to writing a score for?

Jeremy: “My pedal board is an ever evolving beast. I currently run a Donner tuner, Morley Little Alligator volume pedal, Sludge Factory Interloper delay, Dunlop Cry Baby Q wah, MXR Sub Machine fuzz, Mojo Hand One Ton Bee fuzz, God City Brutalist Jr. distortion, Earthquaker Devices Westwood OD, EHX Synth 9, EHX Pitchfork, Digitech Digital Delay, Digitech Giga Delay and EHX Oceans 11 reverb to all three amps. Following thoseI split my signal for the first time with a channel selector. One signal runs to my lead amp the other runs to my rhythm and bass amps. The signal running to my rhythm and bass amps runs through an EHX 720 Looper before being split again by another channel selector to my rhythm and bass amps. The rhythm signal then runs directly to the amp and the bass signal runs through an EHX Bass 9 before the amp.

As far as amps, I run a Peavey Classic 50 410 for my lead signal, a Peavey Delta Blues 115 for my rhythm signal and a Markbass 115 combo with a 210 extension cabinet for my bass signal.

I play a Mexican made standard Stratocaster with a coil tapped humbucker in the bridge position. For strings I use Ernie Ball Power Slinky 7-string sets and swap out my low E string for the low B. We play in drop B and drop A tunings, so the low B string allows me to have more tension on the string and to play more articulately than a floppy down-tuned E string would”

How does the writing process of a new Lucius Fox track start? Melody, riff or rhythm first?

Jeremy: “The writing process varies quite a bit. Sometimes I’ll bring a song to Paul that’s mostly finished on guitar and we’ll jam on it and arrange it in a way that we’re both happy with. Other times riffs or sections arise from us jamming. Some riffs or progressions from jams end up being cut down or stretched out and utilized in songs if they capture the tone or mood we’re looking for. I generally write my guitar parts with specific ideas, moods or storylines in mind. We’re definitely an album band and think more of the big picture than the individual songs. It is important for us that each song works and enhances the overall body of music”

You made the switch from Jeff Hostetler to the pairing of Brendon Infante and David Bauman for mixing and mastering for your past couple of releases. What brought the change about and what was it like working with the new team?

Jeremy: “Red Giant was actually our second time working with Brendon and David. We recorded our last full length, Quaternary Panorama, with them as well. We’ve been continuously blown away by what we’ve been able to produce with Jeff, as well as with Brendon and David. I actually play in two other projects with both Brendon and David and have gotten to be good buds with them over the past couple of years. Jeff has been a good friend since early on in this project and we played shows with his band, Drink Their Blood, all the time prior to the pandemic. We’re always trying to push ourselves forward and try new things as a band and part of that has been working in different environments to capture our sound. Jeff does fantastic work at his studio, Red Obsidian Media and Brendon and David do killer work at Studio Pepper!”

The cover artwork you’ve gone with during your career has been pretty special. Do you believe as we do that “the first bite is with the eye“? What was it like working with Craig Horky this time around?

Jeremy: “Album artwork is something that is very important to us. Being an instrumental band, the album art provides another way for listeners to connect with our music in the absence of lyrics and vocals. We have been lucky to work with some super talented artists over the past few years. Alex (the first Lucius drummer) drew and designed the artwork for our early releases. Our friend Juan Dean designed our logo, the album art for our second LP, TRAPPIST-1, and has done layout work and merch design for both Quaternary Panorama and Red Giant. The clean, retro-futuristic styling he created for us has been a very important part of the visual end of this project. The album artwork for Quaternary Panorama was painted by an artist based in Asheville, NC named Zach Briggs. He has an incredibly unique, eerie style and we felt that it complimented the heaviness of the content of QP perfectly. For Red Giant we were incredibly excited to work with Craig Horky. His artwork is a staple of the Michigan music scene and we love playing with his band, Cavalcade. Our goal with Red Giant was to produce something immediate and intense. The artwork fits that tone perfectly. It vibrantly showcases the content of each of the three songs, while still remaining somewhat abstract” 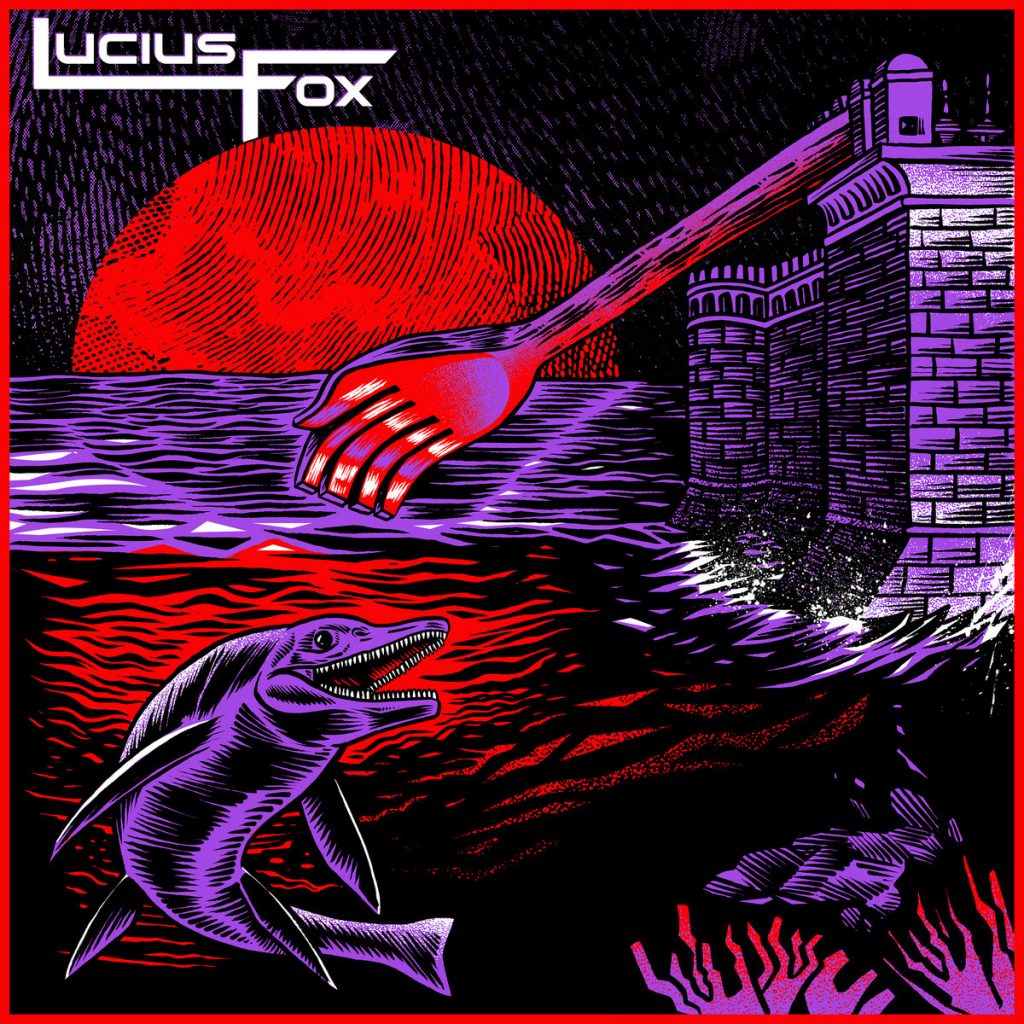