If you’ve ever wondered how far influence travels then there is an answer in the debut EP “Demo MMXX” from Disrotten. They hail from Malacca, Malaysia but cite influences in the both Swedish and Finnish Old School Metal of Death, meaning that influence has travelled some 6,097 miles (or 9,812 km), which is something those bands should be proud of. It’s hard enough for a band to get heard outside of their own country, let alone half way across the Globe. The EP itself was recorded and mixed by Silversound Studios and had an original run of 70 tapes upon release on 1st December 2020 which sold out in seconds. So six months on, Nailbat Tapes will be doing a run of 100 with pre-orders available from 7th May.

Engaging their Boss Heavy Metal HM-2 guitar pedals, Disrotten have opened the gates of hell and summoned forth a Demon of biblical prophecy with “Demo MMXX“, three cuts of chainsaw riffs and dark, sinister movements with that old school raw quality that gives the release charm in abundance. It’s not as raw as “Empiricism” by Incarceration, but it is of the same vein as the German titans last release. The bass is heavy in the mix, there are some Black Metal drum fills and the whole thing flies past like a Juggernaut smashing through everything in its path. “Swallowed And Disposed” has some tasty dive bombing whammy bar action while the bass line of “Encircled By The Red Mist” is so thick you could cut it with a knife. It should come with a health warning for your neck because it’s a Headbangers delight [7/10]

“Demo MMXX” by Disrotten is out now and available over at bandcamp. A limited run of cassette tapes will be released on 28th May 2021 via Nailbat Tapes 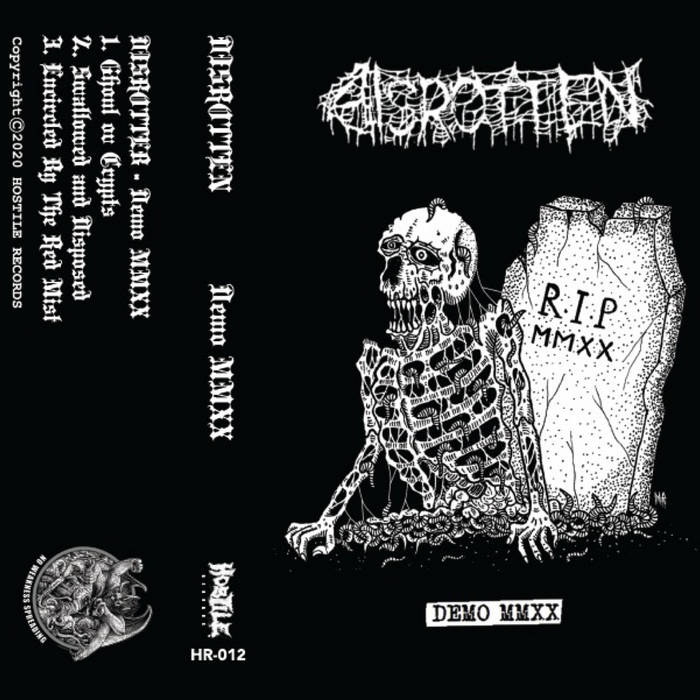