Formed in 2020 by Fábio Infante (Vocals) and Fábio Azevedo (Guitars), who received much attention for the independently released single “Interplanetary Suffering”, Portuguese Deathcore outfit Inhuman Architects inked a deal with Independently owned Australian Extreme Metal label Vicious Instinct Records for their debut album “Paradoxus“. Recorded, mixed, mastered and produced by Titanforged Productions, the band were fleshed out with Susana Gamito (bass) and Marcus Reis (drums) who share the inspirations of genre pioneers Rings of Saturn and Despised Icon although that process was not possible without a few rough moments along the way…

It only takes a glance at the track listing and cover art from Aditia Wardana to know that this band share a love of Science Fiction, Aliens and Horror as much as their Deathcore and Death Metal and in “Paradoxus” they have set about creating both razor sharp and brutal to combine those shared interests. “In Adventu Deorum” is merely the appetiser, a foreboding offering that speaks of something wicked coming this way in atmospheric style before the band open the gates of hell and unleash all the demons held within as they go full throttle with “Behold The Creator“. However, looks can be deceiving and there is much more than just Deathcore to this band, who are so much more than the blunt force trauma that some of the genre’s natives can be. Instead, the band get creative with their extremes, bringing in blast beats, a mournful progressive solo and a tapping section to “Defying the Gods” that see them bordering of Blackened Progressive Death Metal before Fábio Infante’s vocals touch the void into Slam. As much as they take influences from the genre pioneers there are also solid comparisons with bands like Enterprise Earth and with this album they show absolutely no fear as they go for the jugular with some really innovative ideas. Offering several voices throughout, Infante’s vocals are throat splittingly unclean with shriller moments cutting across the full onslaught in vicious style and never being completely incomprehensible even though its black plague ridden, hell there are even a couple of moments where he sounds like a “New American Gospel” era Randy Blythe such is his range and evil power. “Nephilim” brings haunting moments while also packing a Death Metal groove punch Azevedo being more than happy to bring whammy bar action to the party and not be reliant on piling up the breakdowns, “Interplanetary Suffering” cutting in some DJent moments as it pummels through a rhythmic battering whirlwind of toxic death. There are also a few risks like the almost Post-Hardcore introduction to “The Great Deceiver” that will make you double take before the Death Metal guitars come down after 30 seconds and the weak get decimated as the searing vocals burn flesh from bone. While others get technical, Inhuman Architects have honed their skills at creating shrouds of darkness to encase each burnt offering with deadly consequence for anyone deceived into underestimating their power, building burning atmospheres of malicious intent before delivering their skull crushing intensity and making it count. There is also no shortage of “Bleigh!” moments, the finest of these being in “Night Intruders“; as a debut, this is a well crafted and defined offering that has a lot to give with more quality than some can amass in a month of Sundays; the final breakdown section of “Vortex” which builds into the tapping section is a whole new World of assault on the ear drums [8/10]

“Paradoxus” by Inhuman Architects is out 16th July 2021 via Vicious Instinct Records with pre-orders available over at bandcamp. 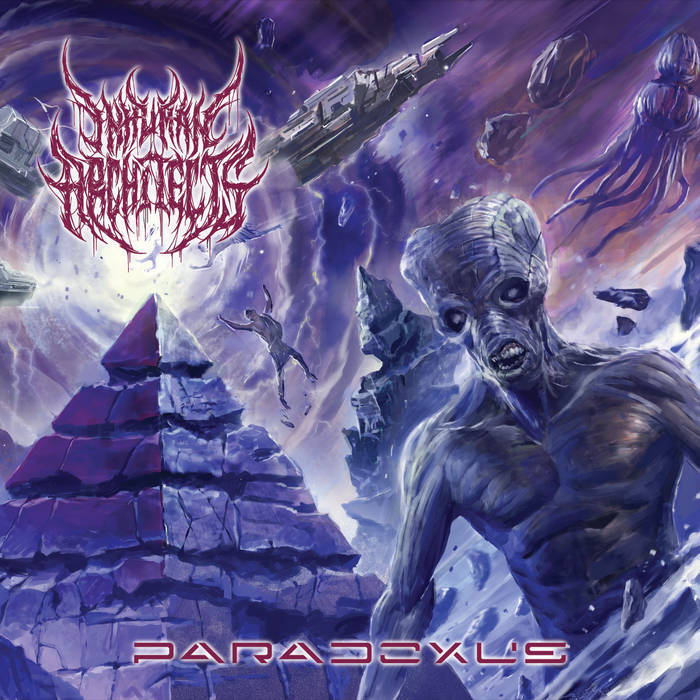