Why have one interview when you can have two? Twice the fun, twice the insight and a second opportunity to read about how Kevin Byrne, the multi instrumentalist behind Irish Dark Metal project Sonus Mortis goes about his business? After releasing the essential listening that is “Past Lives” with its incredible Melodic Death Metal lead guitar work, we were lucky enough to be able to chat to him about the recording so without further ado, here’s what he had to say…

What did you learn from the recording sessions for “Hold This Mortal Coil” that you took into those for “Past Lives“? “Well the recording sessions couldn’t be more different. “Past Lives” was all recorded from my computer at home, guitars, bass, vocals you name it. I would build up all the tracks and then send them onto Mick Richards at Trackmix Studios, so when out of lockdown he was able to do the mix and master for me and I went into the studio for the final touch ups. All previous albums I would have recorded everything at the studio, so that studio time/money pressure was not there this time around which meant I had more time to focus on every single instrument. I think this way benefitted the vocals the most as I had no time constraint.”

The two albums are very different so how do you change in your approach from writing something more on the Blackened Death Metal side to the more guitar driven Melodic Death Metal sound? “Well the melodic death metal sound was what I used to play when I was with Valediction, my previous band, so it didn’t feel that different to me, I just had to rewind a bit. The symphonic elements are still there, the vocal style and the lyrical content continue to stem from previous albums so I think I had enough to carry through into this new album to make it still feel like Sonus Mortis”

How does the writing process of a new Sonus Mortis track start? Melody, riff or rhythm first? “I remember reading some magazine in the mid 90s, can’t remember the name but it had an interview with Trent Reznor (NIN) and they asked him the same type of question and I always remember him saying that he would just take up an acoustic guitar, hit record and play away for an hour or so, rewind the tape and listen back, see if there was anything that stood out. So that’s pretty much what I do, I have a 12 string acoustic guitar and I just jam away until I hit across a riff that I think sounds good. I use a program called Guitar Pro where you can tab out a whole song (guitars/bass/synths/drums). I started this back in 2006 with Valediction when the lead guitarist showed me all his guitar pro songs. I’ve just continued with that approach every since. So every song I’ve ever written I’ve tabbed it out in guitar pro and listen to the MIDI on my computer or my phone when I’m out. Some might see that as time consuming but it’s cathartic for me. Every single album I’ve recorded I have the full songs in MIDI/Guitar Pro format”

The albums you’ve written have all been solo affairs, have you ever considered bringing a guest on board to help create your vision? If that was an option, who would you like to work with in the future? “I don’t think I would ever have someone come in and be a “guest star” on any of my albums. I would definitely consider it if it was for a split or a once-off type song. I want to keep the albums separate; they are my thing as such”

You’ve been using the services of Mick Richards in Trackmix Studios Dublin, Ireland for mixing and mastering; how did you come to choose him for the purpose and how have you found him to work with? “Mick would have done the Valediction debut album back in 2010/2011 so I knew how he operated and what he was like, very easy to work with so it was an straight forward choice for me when doing the demo, initially I wasn’t even going to do any vocals on the demo in 2013 (it was going to be instrumental) but he encouraged me to try the vocals and I’m glad he did push me on that. If you have the time to mess around with the songs in the studio he will chime in with some ideas which are great. Trackmix Studios always delivers quality stuff and you can tell he loves doing this”

For us gear nerds out there, can you tell us what you’re using gear wise (pedals, strings, drums etc) to get your sound? “So for home recording this time around I use Audient id14 for recording guitars/bass and a SM7B microphone for vocals. Software, I use Reaper as my daw, reason propellerhead for synths, spitfire string plugins. I program all the synths in Guitar Pro, export as a MIDI and then import into the daw/reason and go from there.

I’m left handed so I’m more limited on what I can buy in terms of guitars/bass but I use a Thumb Bolt-on Warwick 5 String which is an absolutely beast, definitely my favourite. I use 2 guitars, first one being a 7 string Agile Septor Elite 727 DNC EB (Black Flame design) with Seymour Duncan Blackout pickups, 27 inch scale. My second guitar is a 7 string Dean Rusty Cooley Wraith guitar with 2 bareknuckle aftermath humbuckers. First guitar is more for rhythms and the second more for leads.

I’m in several tunings, can be standard B/A or drop A/G#. But for “Past Lives” it’s all standard B.

And for “Past Lives” I decided to buy some Vocalzone pastilles and I honestly couldn’t believe the difference after doing a few days of vocals. Would definitely recommend them.”

What difference would it make to you as a band if you could land an endorsement from a gear manufacturer? “I have no loyalty as such to any gear manufacturer…although I am partial to Ibanez as that was my first ever electric guitar and Warwick because the thumb bass is the best thing I ever bought. Honestly if a record label just paid for my recording studio time I’d have no problem never making a penny from any album as long as I could write music for free and that people could listen to it” 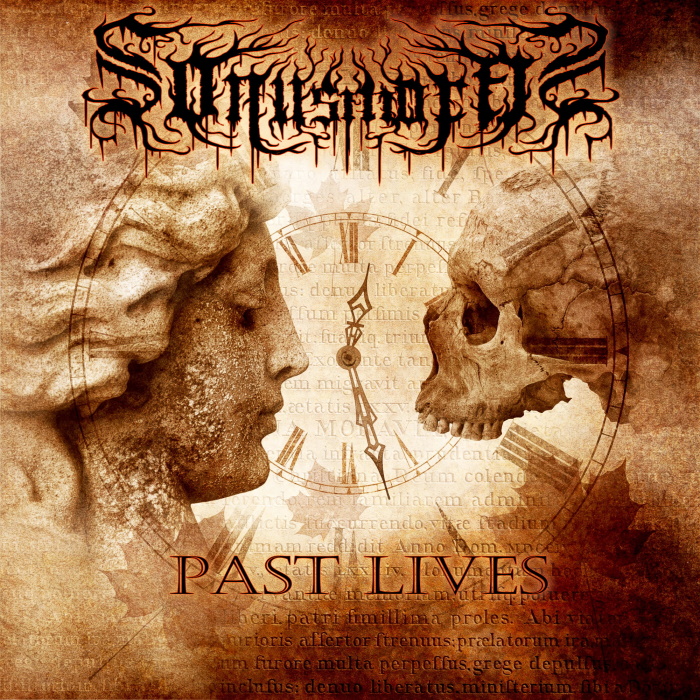