Following on from last weeks exclusive interview with multi instrumentalist Jackson Meldrum, the mastermind behind solo Melodic Death Metal project Destruction Of The Healer, we go behind the scenes of his current EP “The Living World Can’t See” with him to find out what was involved in creating the sonic oblivion. Hailing from Australia, where everyone seems to be an athlete or musician and there is a hotbed of talent, it might be difficult to stand out from the pack but this one shines like a diamond in the rough.

What did you learn from the studio time from your previous EP “Losing My Mind” that you took into the recording of “The Living World Can’t See“? “As I mentioned before [In last weeks interview ~ Ed], I wrote Losing My Mind after The Living World Can’t See despite the release dates. If anything I had taken what I knew about melodeath and applied it to DSBM, so there are a few harmonised riffs mixed in with the slow drone style. But mostly, the releases are otherwise completely unconnected. And while I don’t consider it a mainline release I have been considering the recording of non-melodeath EPs as sort of a side thing where I can experiment in other metal subgenres (currently thinking of recording slam or OSDM) and I can take the lyrics a little less seriously and just be a bit jokey with it. The melodic death metal stuff will always remain my main focus though”

How does the writing process of a new Destruction of the Healer track start? Melody, riff or rhythm first? “I guess it’s always started with a riff, or an idea of a riff. Mourning Tarnished and DOTC both started out with their respective verse riffs. And then it comes down to what comes next. I think I took separate song writing paths for each song. Mourning Tarnished is a lot more free flowing. There’s no chorus or verses, it’s just a barrage of riffs and it sort of follows this narrative style that I think coincides with the lyrical themes… maybe. Destruction of the Cured follows a more structured approach with its verses and choruses and solo sections. My song writing style feels quasi-random, I just tack riffs together and then flesh the song out from there”

“Destruction of the Cured” has some really well put together vocal layering so you’ve got a lower tone playing off against a shriller one; have you ever had any vocal coaching? How do you go about protecting your vocal chords in the studio? If you had the opportunity to bring in a guest vocalist, who would you like to work with and why? “I have never done vocal coaching, as a matter of fact I only started trying to do it at the start of 2021, after recording all of the instrumental parts I thought it might be fitting to top it all off and write the lyrics as well. I’m entirely self taught, and I think any other vocalist of this style might be able to tell. But I think given the time I’ve been given to actually learn, I’m doing alright. The first time I really tried to record vocals was at Kane’s [McCarthy, who Mixed and Mastered] place, and he, as a singer, was kind of able to coach me on how to protect my voice in a more general sense, but it still ended up pretty weak and shitty, and I had to take some time away and practice. I haven’t really thought about guest vocalists at this point early on. It would be insane to record something with Trevor Strnad from The Black Dahlia Murder. The band is definitely a great inspiration to me, and he is something of a personal hero to me, I guess. Not to sound weird hahaha. Definitely not happening anytime soon”

You outsourced the mixing and mastering to Kane McCarthy for “The Living World Can’t See“; what made you pick him for the purpose and how did you find working with him? “Kane is one of my mates from high school and he’s always been something of a multi-talented musician, among (many) other things. He also happens to be a massive audiophile and has set himself up with a pretty sweet home studio. He has been doing audio production hobbyistically since high school and his skill, by far, outranks mine. I think comparing my mix to his mix speaks for itself, but luckily nobody has to hear my attempt haha. But yeah, I’m very lucky to work with him.”

For us gear nerds out there, can you tell us what you’re using gear wise (pedals, strings, drums etc) to get your sound? “Well, I’m a broke-ass uni student, so I’m working on a pretty tight budget haha. For ‘The Living World Can’t See’ I was recording using my Ibanez RGRT421, with Ernie Ball strings. The guitar amp you hear is actually a Line 6 Spider V modelling a PVY 5150, an amp notorious for its shitty sound, but I think it does alright on the EP. Nothing special, but it’s alright. For a drum sampler I used Ugritone KVLT drums II. Bass was recorded on my girlfriend’s Schecter Stiletto Extreme 4 through Audio Assaults Duality Bass amp sim. The microphone I used to record was also a Behringer, funnily enough, so all up and excluding instruments everything I used to record would be less than $1000. I’m looking to grab a Peavey 6505 amp but there’s not a lot being sold in Australia, so they’re decently hard to come by”

What difference would it make to you as a band if you could land an endorsement from a gear manufacturer? “Probably a huge difference. I think the gear I’m working on does its job, but to get an endorsement with the benefit of greater access to a brand’s product line would be huge. With that would come better quality sound from better quality gear and hopefully a better quality recording. But to be completely honest I don’t know exactly the level of benefit an endorsement would behold, but It’d definitely make a difference”

“The Living World Can’t See” by Destruction Of The Healer is out now and available over at bandcamp. 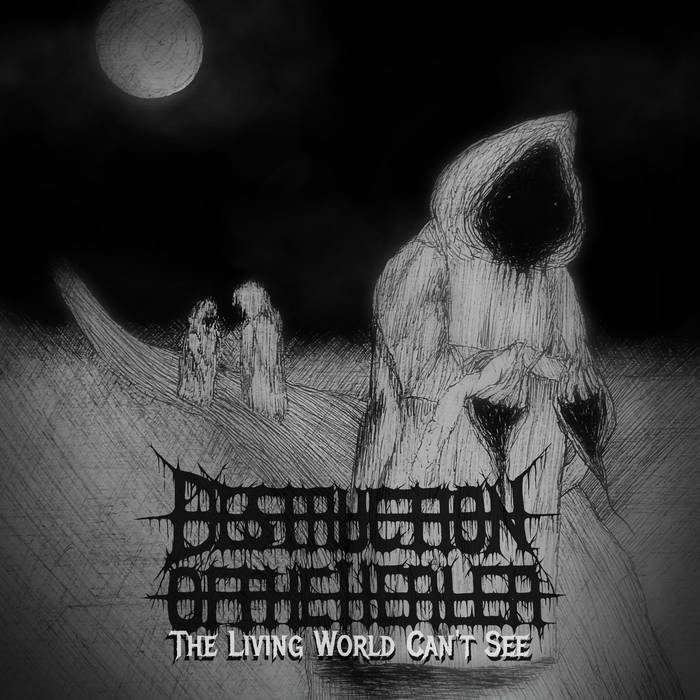 Tags:Destruction Of The Healer, Let The Earth Reclaim Me, Losing My Mind, The Living World Can't See