When it comes to Brutal Texas Death Metal, it’s rare to have one female of the species in a band but in the case of Stabbing, a band who have earned their scars in brutal units like Scattered Remains, Flesh Hoarder and Nephilim Grinder to name but a few, somehow they have a pair of them in vocalist Bridget Lynch and bassist Meryl Fry. They’re joined by guitarist Marvin Ruiz and drummer Rene Martinez for the bands first bloodstained offering because what is blood for, if it’s not for shedding?

A frenzied attack upon the ear drums laden with a surprising amount of groove and an ocean of blasts in the vein of label mates Twitch Of The Death Nerve is what Stabbing have created as they get up close and personal in the violent “Splatter Pit“. The recording sounds like it is one at the higher end of the demo tape spectrum and every hit of the  clinically clean drumming from Martinez is heard during this gore filled cult horror Extreme Death Grind offering. A master of the kit, those rapid fire attacks are as endless and relentless as any Black Metal offering might be with perfectly executed transitions making for a captivating performance. Lynch’s vocals are as guttural as you are going to find anywhere on planet metal, her throat splitting, larynx threatening performance is one that severs flesh from bone and requires a lyric sheet to decipher; she becomes an instrument of ear canal destruction during the title track and the sickening grind of “Gutted By The Beast” is unstoppable. Each cut is an incendiary burst of intensity inspired by bands like Disgorge and Defeated Sanity whose influence is the equivalent on a bloody hand print upon this crime scene and this could be the heaviest thing you’ll hear all year. Ruiz  deserves a lot of credit as he’s a lone guitarist in the band can carries the weight of a pair of them with a plethora of weighty, spine shattering riffs that others would kill for. As an introduction, you’d be hard pressed to find one better than this, especially as this group have been together just 12 months [7.5/10]

“Ravenous Psychotic Onslaught” by Stabbing is out 10th December 2021 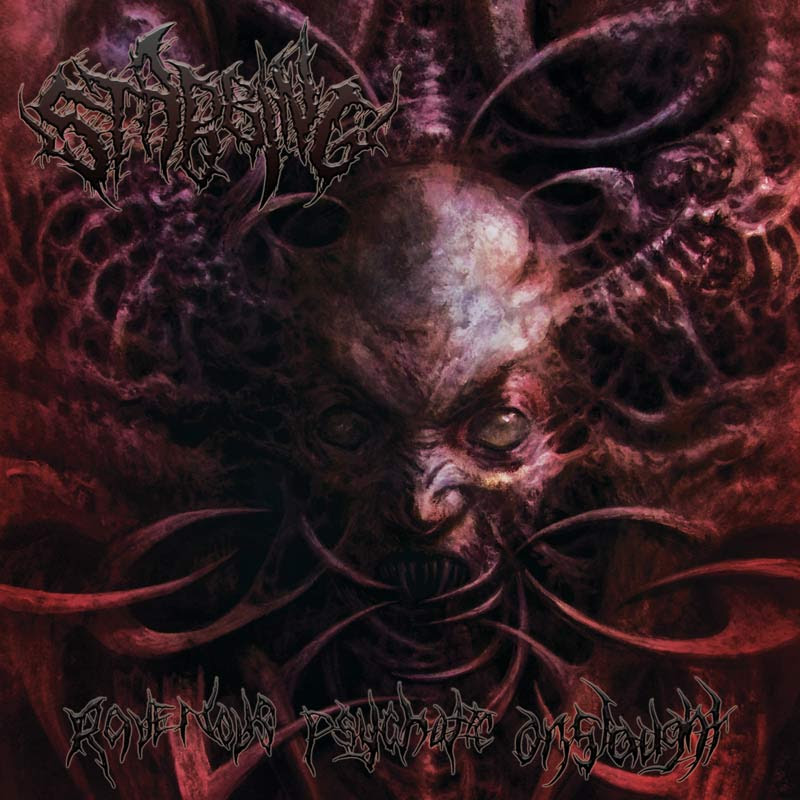