San Francisco California has been responsible for more than it’s fair share of Metal history and back in 2017 the first incarnation of MÆNTRA was conceived as a Brutal Industrial Death Metal project with what we’re going to loosely term cosmic leanings. Now on the third incarnation and a trio of guitarist and vocalist Rudy Pina and drummer Adam Houmam (Cartilage, Ghoul, Terrorizer L.A.). The universe then brought Paul Ryan (Origin) on bass and vocals, they have offered their debut album “Kundalini Rising” to the Metal Gods with this intriguing statement: “13.8 billion years ago, the universe was born from a big bang and consciousness was created through the sound of OM. From the journey of billions of years of evolution, survival, death, rebirth, wars, peace, and music emerges MÆNTRA, a trio committed to helping their listeners find their own personal light by playing in the darkness and embracing aggression. MÆNTRA lays their meditative lyrics on top of a unique blend of brutal death metal, industrial sounds, atmospheric tones, and intentional healing energy. It is said that by simply playing the debut album, Kundalini Rising, the listener is brought to a state of euphoria and dissolution of the ego. Time no longer has meaning and the past and present don’t exist. Layering a sonically aggressive sound with intentional healing and empowering lyrics, this journey of releasing demons and rejuvenating the soul is grounded in a tour of the seven chakras, guiding listeners through the healing process to release tension, erase limited beliefs, and improve overall physical and mental clarity. Fans can expect in person healing through MÆNTRA’s unique live experience shortly thereafter”

If like us, you’re not sure what to make of the bands introduction then all we can suggest is checking out one of the singles or the album, which is probably exactly why you’re here, reading this review and fortunately the music speaks for itself… MÆNTRA waste no time with extended introductions, leaping headlong into the wormhole with “Muladhara” which kicks up dust with a Fear Factory esq main riff, a wealth of jackhammer double pedal action some truly caustic vocals before “Svadhisthana” brings bursts of Death Grind kit work with industrially augmented sounds adding a tense atmospheric to the menacing angular guitar attack. They say that music soothes the savage beast but there is no inner peace or enlightenment here, only the eternal perpetual night terror filled horror of Brutal Death Metal, a single death growl alone enough to make anyone faint of heart run like the plague wind. Kansas City based engineer Rob Rebeck (Tech N9ne, Origin) who mixed and mastered the record deserves a lot of credit for getting the levels perfect, giving everything it’s rightful place and giving “Kundalini Rising” just the right amount of polish because while there are no rough edges in this Science Fiction Horror story, none of the razor sharp edge has been taken away in the process.

Pina’s riffs aren’t overly technical, there has been a clear decision in the creation of the bands sound to go with unrelenting powerhouse rhythmic battery and wave after tsunami wave of Death Metal riffs delivered with pace and energy with an emphasis on crushing atmospheres that could destroy Worlds in a heartbeat. That being said there are a few moments of calm, the industrial soundscape at the end of “Anahata” with its icy synths offing respite before the in your face brutality whips up the interplanetary storms once more with the rumble of the double bass blasters underpinning “Vishuddha” before its intriguing ethnic finale. It has to be said that having a flesh and bone drummer as opposed to a drum machine on an album like this makes a big difference and the band have done well to find and pin down a drummer of the skill of Houmam because he will be in demand elsewhere judging by his incredible performances. “Ajna” brings the industrially augmented breakdown sections that will make make fans of the recent Djinn-Ghül EP do a double take before the unstoppable force that is “Sahasrara” brings the album to a thunderous close, only breaking its skull battering intensity for a spoken word moment that reflects the bands statement. As a whole “Kundalini Rising” hits with the lethal force seen in Deep Impact, becoming gradually heavier and more monstrous as it plays out and like the best of science fiction horror films it will leave you wondering what you have just witnessed as the Earth shakes beneath your feet… [7.5/10]

“Kundalini Rising” by MÆNTRA is out 18th February 2022 with pre-orders available over at bandcamp. 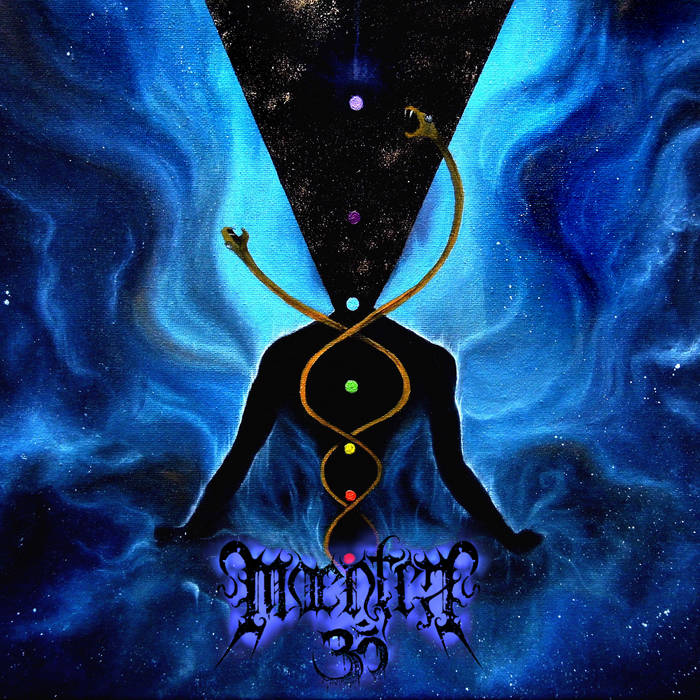