“Sun is shining, the weather is sweet, yeah… Make you wanna move your dancing feet now, To the rescue, here I am, Want you to know, y’all, can you understand?” ~ Bob Marley.

On a glorious Sunday afternoon our destination is The Facebar in Reading for 12 bands over 2 stages with 0 clashes as the third incarnation of Reading Rising Festival takes place. While it’s billed as a Alternative Rock event, the organisers have a habit of bringing together a far more varied collection of bands including local heroes as well as some of the lesser lights of heaven…

Opening the show are Phantom Booth [7/10] have a Queens Of The Stone Age esq Desert Rock vibe and perform as a trio minus a second guitarist. They have commercial sensibilities and could have appeared on the cover of NME at any point in the past 30 years, not that they sound dated, just timeless in the distinctions of the genre with a pinache for storytelling and hypnotic riffs that don’t quite reach the full blown stoner stage. “Witch Hunter” and “The World Outside My Door” are highlights enjoyed by a growing audience…

Mercurys Well [8/10] are the second trio of the day, taking to the stage wearing Hawaiian shirts and with microphone stands adorned by fake flowers as they give off the vibe that they don’t take themselves too seriously but their sound is the polar opposite of their appearance. Their  brand of death and destruction has some Progressive Metal moments wrapped around longer instrumental passages, bursts of Post-Hardcore and Death Metal always threatening to destroy. “Blood” is a highlight with the band suggesting they have a self titled album in the works while their self depraviting sense of humour between songs is refreshing…

They may have been around a couple of years now but Skoria [9/10] remain so fresh that aside from social media, they don’t have any recorded works in the usual places. Sounding an “Ember To Inferno” era Trivium with the full suite of Death Metal tinges in their Metalcore sound, Sokoria are a band who benefit from a powerhouse rhythm section that drives them forward, sword and shield aloft. We’re sucker’s for a pick slide and they’ve got a few in their riff heavy set, double kicks a plenty. They sound well versed and while they don’t offer anything you haven’t heard before, what they have created is so damn slick and stylishly delivered that it’s instantly enjoyable.

Weaponry [10/10] We’ve been to enough Weaponry shows to know what they’re capable of and this afternoon they don’t disappoint, blasting through their tracks effortlessly and sounding heavier and tighter as a four than they did as a five. Guitarist Rivers shows off with some one handed tapping antics as Al Bristow stalks the stage infront of the audience and both end up in a sweaty mess by the end of the intense Post Hardcore set. New cuts “Please Enjoy The Show” and “My Name Is Glory” are both well received with Bristow getting braver and braver with his Climbing on the fixtures and fixings as he screams at the audience. Anyone would think he was Casey Chaos from Amen. A new EP is on the way and with it the World will be their Oyster.

Tether [8/10] They say never judge a book by its cover and to that end Tether are one of those bands who don’t look as heavy as the actually are. When their frontman does use his clean vocal pipes there is the air of Brandon Boyd of Incubus fame but otherwise they have a plentiful supply or riffs at the Hardcore end of the Metal spectrum despite self describing as Post Hardcore and have a certain bounce appeal. New singles “No More Sleepwalking” and the “Illusionist” are impressive as they practice what they preach with their mantra of “Break your tether. Free your life“.

Calling themselves an evolution by freeing themselves of guitars Lake Acacia [6/10] are drum and bass two piece who create Alt Rock with chunky rhythms and vocal harmonies. While any drummer who can sing at the same time as put in an energetic performance behind the kit deserves a lot of credit, unlike bands that have have done all bass before like Chimp Spanner, they lack a certain something to set them apart.

Offering some almost DJent groove, Forlorn [8/10]  have a frontwoman capable of producing the kind of throat shredding, bowel clenching  vocals that make you twitch. Your brain asks if you heard what you think you did? Yes. Yes you did. It sounded like an exorcism in the best possible way, which is probably why the band have an all black asthetic. It’s heavy, it’s emotional, it’s awe inspiring and totally captivating. It’s easy to get lost in their sonic oblivion and let it drag you with a whimper along with its meloncholic caustic abrasions. “Old Wounds” is absolutely stunning.

Flipping the script on its head InAir [7/10] take us from the bleaker cinematics to are a far more melodic affair with their Alternative Rock. Augmented by the occasional programming and heavier moment they have their fair share of anthems including “Dreamful” and could best be described as one of those bands who are the right song at the right time away from becoming a commercial success and playing Reading Festival itself. They have the raw material, they simply need a few things to fall into place.

It feels like forever but the last time we saw Transients [9/10] live was actually the last show before the first lockdown, a Bloodstock Metal To The Masses show in Oxford. Tonight is their first show back and the new material aired during the set certainly bodes well for the future. The Tech-Metal grove of their brand of Metalcore is undeniably addictive and they still have the happiest bassist of all time in Josh Sparkes and as they hammer through cuts like “Scratch The Surface” and “Dark Days“, the beaming grin on his face telling you all you need to know. They’re back and they’re here to stay.

Once again flipping back from the heavier to the more melodic All Ears Avow [7/10] have Pop Rock radio sensibilities and have been touted by the likes of Kerrang Magazine for 2018’s “Skin and Bones“. Tonight however they struggle to get going with, for us at least, the wrong choice of opening song, however improve as the set plays out, winning us over by the end. Another band with a drummer who contributes vocals in Sean Ives, the contrast between his parts and those of Claire Sutton works well together.

Armed with new single “Sleepless” and huge “Gravity” which has 3.2m Spotify streams.(and rightly so), Defences [8/10] close the blue room stage in style. The soulful female clean vocals  contrasted against the male unclean roars work perfectly together against a backdrop of thunderous rhythmic prowess from 5 string bass and 8 string guitars as a match made in heaven. They’re one of those bands that are greater than the sum of their parts with lyrics that run deep with introspective thoughts bleeding out on the microphones and resonating. The only issue here is that the band play the cuts a little bit faster live than they do on the record and while that creates a higher energy show, it does mean that some of the wordier parts occasionally get lost. But nevertheless they are a band that impress and even mange to split the audience and get a call and response going which is great fun.

Tonight’s headliners Press To Meco [7.5/10] have a theatrical quality to their music, inspired by everyone from Daughters to Paramore and Twenty One Pilots it’s the contrast in their songs that makes them an enjoyable listen. At times they threaten to burst onto something more brash but the trio always dial it back, leaning on more melodic roots as they each member of the trio contribute vocals. An hour long performance that closes the event in style, there is just the feeling that they’re holding something back. Maybe that’s just their way. The clash of styles they’ve put together is certainly intriguing with current album “Transmute” offering plenty of easy pickings, sing-a-longs and hand claps for their set. 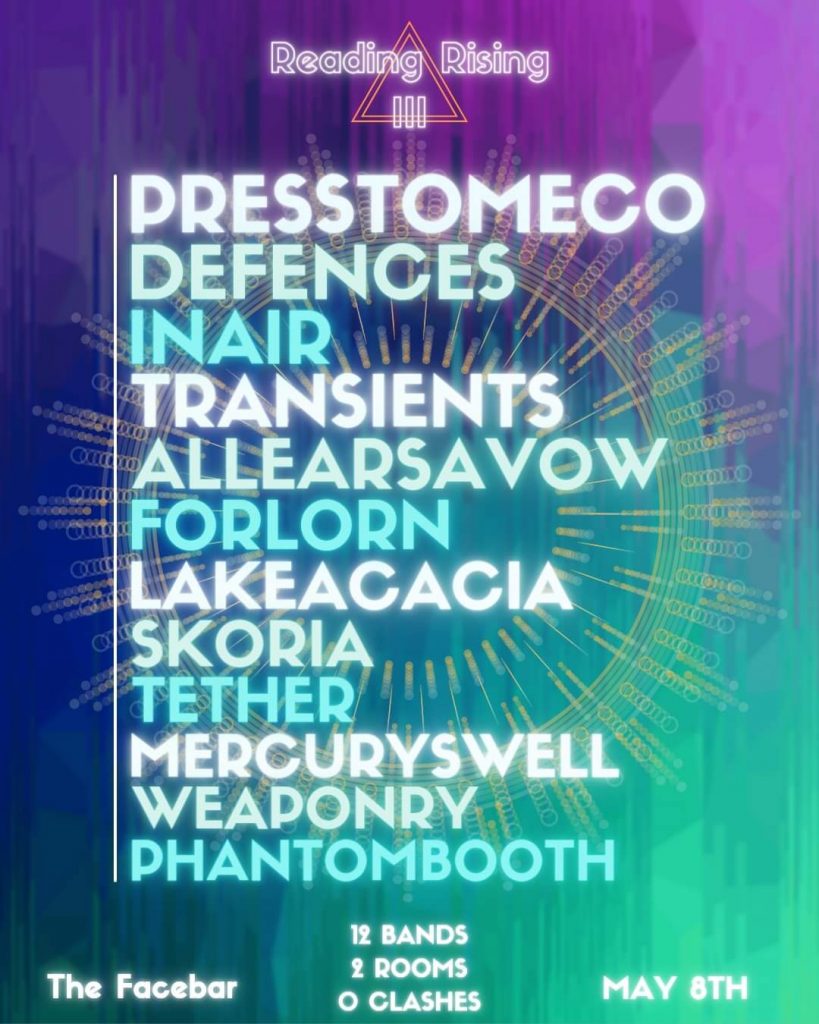