Since 2017 Nu-Doom Death Sludge Hardcore act eyesnomouth have been causing a stir in Bath Summerset, dropping four EPs in “#1“, “Griefhole“, “Nihil” and “The Infinity of non-existence“. Surviving line up changes and coining the genre “Doomcore” in the process, we spoke guitarist Ashley Easton about the bands experiences writing and recording those works that show a clear evolution in the bands sound to reach one more in keeping with the original visions…

How did your previous experiences writing and recording music help to smooth the path for “The infinity of non-existence“? “We know what keeps us all comfortable and in good spirits in the process, some might see it as good thing, other’s maybe not so, but we intentionally write so it is easy and quick to get down, we could push ourselves a bit more but at the end of the day if it takes 20 takes to get a part tracked then we probably have no business playing it, we just do our best to write and play to our strengths. We usually give in to playing to a click track when recording, which is good for making everything neat and tidy but we wanted it to be a bit more human sounding this time so we tracked live without a click which gave us a bit more freedom to play in the moment and just capture us as we sound, we may do it again that way next time or go back to individual tracking, it will depend on the nature of the tracks and how we feel like presenting them at the time”

How does the writing process of a new track start? Melody, riff or rhythm first? How does it evolve from there before you consider it the finished article? “Sometimes I just think of the main bulk of the song in my head, work it out, show the guys the riffs at rehearsal and it just comes together in a matter of minutes and we mess about with it a bit after…Nihil Ep was pretty much written like that. On this latest Ep it was a more collaborative process but it is pretty much always lead by the riffs and getting a basic structure down. There are usually more sections in the tracks to begin with which end up getting stripped out and binned or used for a other track. I suppose we consider it finished when we have played it enough times that vocals and any extra guitar parts have found their place and we no longer desire to change anything about it, there are often last minute tweaks to vocal rhythms and beats etc when it starts taking shape recording, it’s easier to come up with different ideas hearing it back in that way”

Where does your love of the three track format come from? If you were offered a split EP with another band, who would be first on your list and why? “Three tracks are easily digestible which caters for short attention spans but also enough to get into it and paint some kind of story, it also allows for us to keep changing direction and not getting stuck on one path, that keeps it fresh for us and keeps us motivated to keep doing it. For a split Ep we’d probably go for the incestuous option and call Dystopian Dread, they feature Robbie (nihil ep) on vocals and they play dark fast crust punk stuff, they have the same kind dark mood but it would be a cool rhythmic contrast…and would show everyone Wiltshirrre and Somerrrset be made of!”

Both “The infinity of non-existence” and predecessor “Nihil” were recorded and mixed by Ben Turner at Axe and Trap. How did you find working with him and what led you to do so in the first place? “Ben’s great at bringing the true character and colour of a band out and he’s easy to work with, very patient and diplomatic, we feel at home with him and he’s got some great gear to mess about with. We’ve worked with him on other stuff in the past which came out really good and have listened to a lot of other bands he has recorded which lead us there in the first place”

“Aiden (vox)
Whatever SM58 is to hand at the time, obviously.

Ash (guitar)
Ibanez Iceman w/ dimarzio deactivator pickups
Ernie ball mammoth slinky strings (62)
EVH 5150 III 50watt combo
Electro harmonix cathedral
Electro harmonix holy stain
Digitech drop tune.
We used the drop tune pedals to tune down for the nihil ep, it gave a pretty neat tidy sound, which would be perfect for djent but we found it sucks a bit of the life out of the signal so we have gone naked again to give us the sustain and feedback we want, I still use the pedal live for octave dropping in certain parts though, its pretty fun.

What difference would it make to you as a band if you could land an endorsement from a gear manufacturer? “That’s not something we have ever thought about, nor something I know the answer to! We have wanted to obtain some kind of sponsorship/endorsement from our beloved Henry Westons cider but they seem to think its clever marketing their delicious cheap super strength cider to middle-class yuppies…so we will just continue to endorse them against their will”
“The infinity of non​-​existence” by eyesnomouth is out now and available over at bandcamp 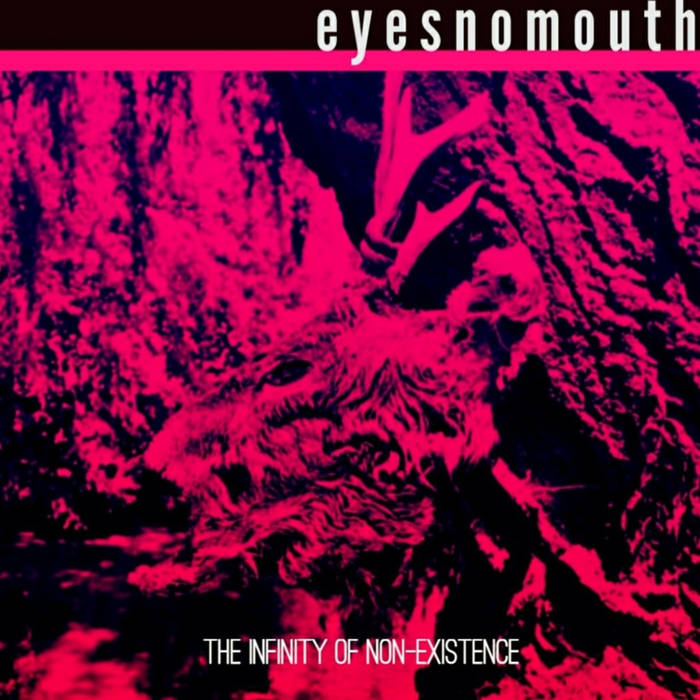