Skip to content
HomeReviewReview: “Blood, Sweat and Stella” by Pintglass

After 2019’s “Way Of The Geeza” announced Pintglass to the World as a Beatdown Deathcore collective with Ben Mason of Bound In Fear and Barney Warner of Replacer delivering tongue in cheek humour over a plethora of riffs and pummelling rhythms there seemed to be an air of a time limited side project to Pintglass due to commitments elsewhere. However they have continued to appear at one off shows with alarming regularity and a sophomore album with a Split EP with Stranged sandwiched in between tells us there is more life in them yet. Enter “Blood, Sweat and Stella“, a record with a wealth of guest vocal appearances. Composed, Produced and Mixed by the aforementioned Warner who has since been forced to step away from the group, whether this outing represents his last involvement remains a mystery at this point, especially as he was front and center during their performance at Radar Festival and on the stage joining in vocally many a time…

…”Stella Styll” is a Trap Metal style introduction that ushers in the pure violence of “Bellend“, the band choosing a guitar tone more in keeping with Metallic Hardcore from the late 90’s, the pulverising groove of the rhythm section driving the cuts home one after the other. Each vocalist goes supernova, taking it in turn to rant, splicing their verses with random spoken words and Deathcore roars as things keep moving with at pace, everything kept purposefully short and violently sharp with very little fat that could be trimmed. Everything has plenty of bounce with that tongue in cheek humour picked up where it left off on the first record, Geezacore live and direct all the way. “Blood, Sweat and Stella” gives us some gang chants and crushing downtempo Deathcore sections as the band re-create the atmosphere of Grand Theft Auto, adding in moments of Yardie inspiration to the Geeza mentality with the spoken word of “Sweet Can Of Mine” being a hilarious palette cleanser. Kyle Medina of Bodysnatcher fame lends his throat to “Pipe Down Mate” that brings the bass drops as the band go low and slow, instructing someone to go into the boozer and have a pint with the boys to avoid getting curb stomped for having a loose tongue. Think Edward Norton’s “American History X” and you get the idea because there is absolutely no filter on the lyrics, they are not for the faint hearted. 90’s breakbeats bring in “Tarzan Of The Boozer“, before the weighty Deathcore groove cuts like a hit knife through butter. Is anyone making cuts like Pintglass? Hell no. Gutrectomy maybe guitars wise. They’ve scripted something that sounds like a Deathcore version of “Lock, Stock and Two Smoking Barrels” and God only knows who’s shrill uncleans rip through “Double ‘Ard Bastard“, tearing through your ear drums like a banshee wail. This is a full on audio assault, half an hour of power that once again demonstrates the way of the Geeza [7.5/10]

“Blood, Sweat and Stella” by Pintglass is out now 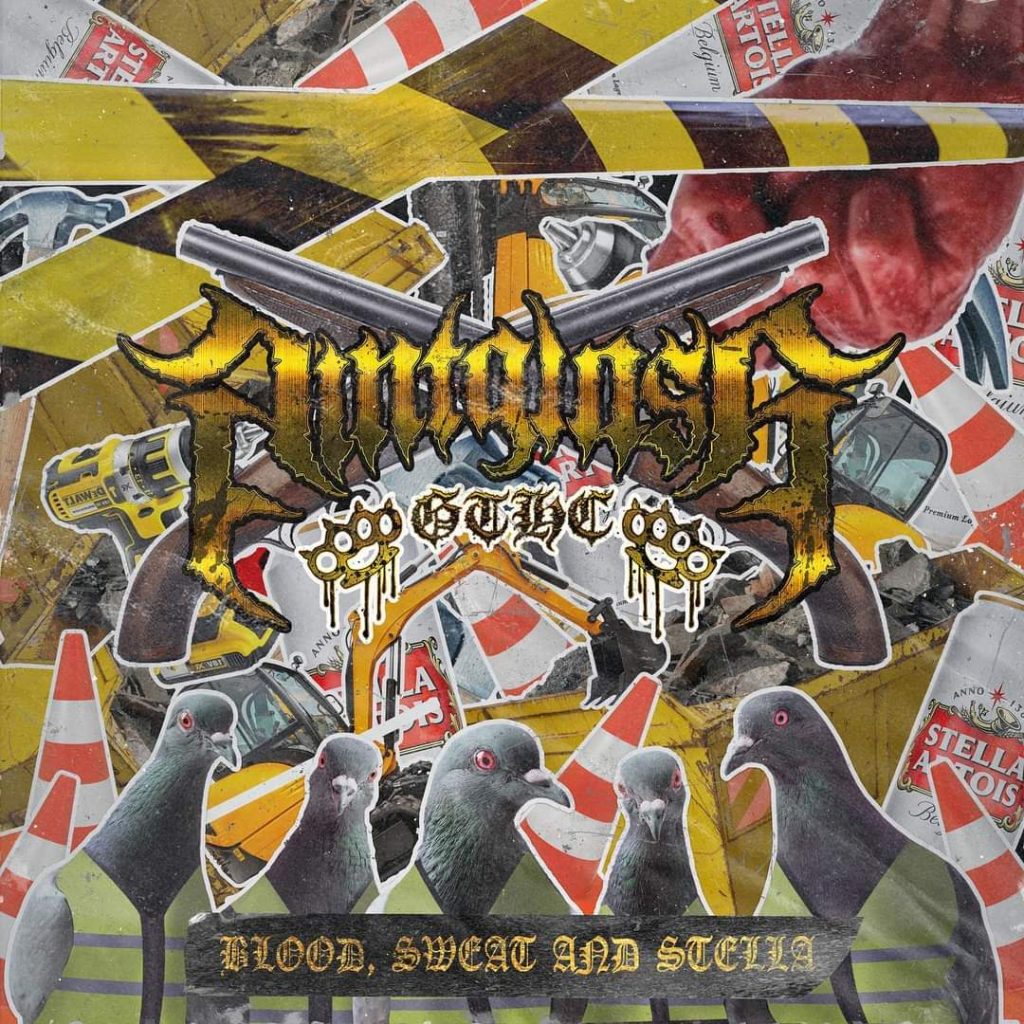