Skip to content
HomeReviewReview: “In Nomine Diaboli” by Imprecation

Recorded and mixed by Mike BBQ (Oceans Of Slumber, Oath Of Cruelty) and mastered by Dan Lowndes at Resonance Sound Studio (Corpsessed, Haunter, Gehenna) while being adorned by cover artwork from Jose Gabriel Alegria Sabogal, the long awaited follow up to 2019’s critically acclaimed “Damnatio Ad Bestias” may yet be the final resting place for Texas Old School Death Metal purveyors Imprecation. On this recording lead guitarist Nick Norris is joined by rhythm guitarist Milton Luna, bassist Jeff Tandy and vocalist David Herrera while marking the final recorded performance of founding member Ruben “Vomit” Elizondo on drums and keyboards, who tragically passed away in 2021, leaving a gargantuan void to be filled. For now, in the live arena at least Matt Heffner (Cemetarian, Thy Feeble Saviour) graces the drum stool as the band march on, continuing the work of the past three decades of destruction…

Sounding like the tape traded albums of the golden age of the genre, the echoes of “In Nomine Diaboli” are heard from above the basement hell in which they recorded the album, the ground shaking beneath the feet of those who dare listen as demons are summoned forth from the very bowels of the earth by the soundtrack which Imprecation create. Opening cut “Reborn In Fire” is a dark and brutally uncompromising affair that finds the band straying from the left hand path with moments moments of Sludge Metal riffage and Thrash inspired solos as they cut their path through the undergrowth. Sublimely malevolent, it offers a horror film score of immense power with cleverly worked tempo shifts offering swirling dark moods. Shorter, faster cuts like “Agnus Dei (Spill the Blood)” and “Ars Goetia” are made by Elizondo’s kit performance, his restless and relentless blasting rattling the cages of unsightly beasts as the riffage takes hold, the band being masters of dark and foreboding atmosphere. His keyboard work adds ethereal touches to stand out first single  “Bringer of Sickness“, a barbed and barbaric cut that finds Herrera at his venom spitting finest with moments that sound close to Sepultura vocalist Derrick Green’s harsh bark. That is of course where that comparison ends because Imprecation have more in common with the “Morbid Visions” era of the Brazilians output than anything they’ve done since.

Offering slower and more dirge laden moments “Black Communion” feels like the hatchet has been buried in the skull and then violently removed but the intricacies of “Devil’s Funeral” are far more sickening. Razor sharp soloing from Norris cuts through the blunt force trauma of the rest of the soundscape like a hot blade through flesh, leaving the fretboard smouldering and a stench in the air, the oppressing sense of darkness brilliantly claustrophobic. “Thorns Of Hate” could easily be rebranded “Horns Of Hate” as Norris once again blows our minds with a helter skelter off kilter pair of solos, the space between the two offering a dark melody that finds the band momentarily in Integrity territory. Powerhouse moment “Stigmata Wounds” is brought to life by injecting the corpse with a lethal dose of spooky synths to give it a low budget horror film vibe before the churning chugging riffs haunt like ghostly spirits and Herrera sounding like a Satanic ring master at an evil circus. The menacing fury of the cut is there for all to witness, it’s longer instrumental passages allowing momentary respite before the ear drums begin to perforate once more. Put this on after midnight on Halloween and see what the Ouija board summons. The same can be said of “No Kingdom Awaits (Let Us Prey)” which takes the concept of the previous cut to the next level of brutality, disposing of the weak minded with pure unadulterated hatred… [7.5/10]

“In Nomine Diaboli” by Imprecation is out 14th October 2022 via Dark Descent Records with pre-orders available over at bandcamp. 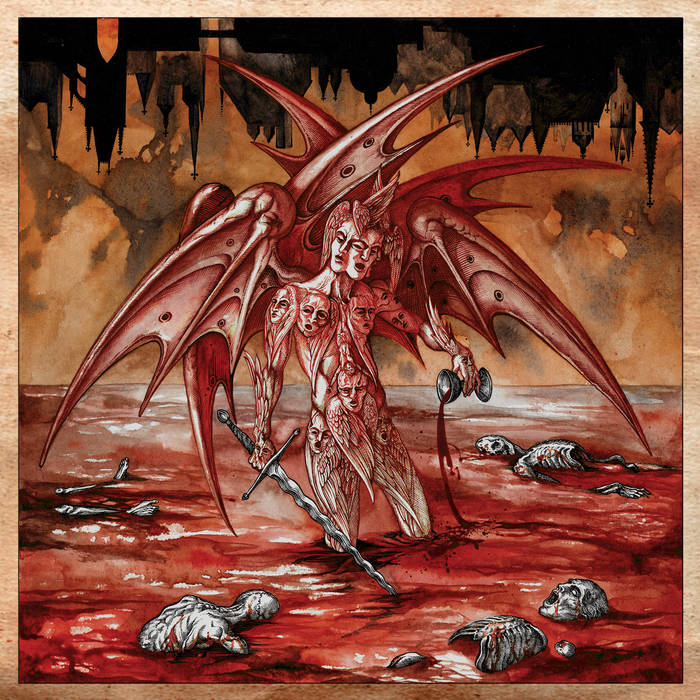