New Zealand Napalm Records signings Alien Weaponry will be heading over to Europe for some Festival shows this summer and have announced their off date club shows for June, which include a five date UK run. We’re expecting that Road Mutant will be salivating at the prospect of getting involved in this… 16th Bristol, The
Read More

Nora wrote a track called “Nobody Takes Pictures Of The Drummer” for their classic Metallic Hardcore drop “Loser’s Intuition” back in 2001. It used to be a sentiment that was true but in 2019, drummers finally seem to get the credit they deserve. In this latest episode of Gear Masters Alien Weaponry sticksman Henry De
Read More

While they were at The Apollo Theater A.C. in Belvidere Illinois on 28th September, Alien Weaponry vocalist and guitarist Lewis de Jong spoke to the Digital Tour Bus cameras about his stage gear for this episode of their Gear Masters series. “Tu” is out now via Napalm Records and it’s taken the New Zealand Thrash
Read More 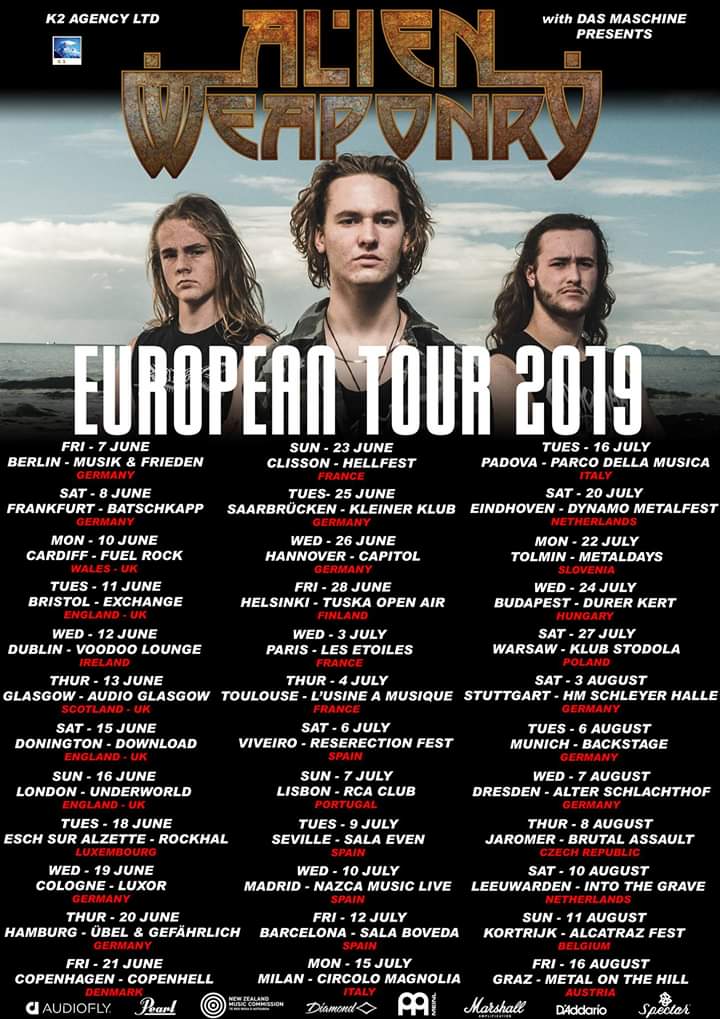 Three piece Thrash Metallers Alien Weaponry will be heading over from New Zealand this summer as part of a huge World Tour! The European Festival circuit is the place they’ve targeted, filling in the gaps with club shows as you’d expect as the band play their unique blend of Thrash coupled with their native language
Read More

If you haven’t heard about the trio of teenage Metal Heads that is Alien Weaponry playing Thrash Metal with lyrics English and their native New Zealand Te Reo Māori then where have you been? Their album “Tu” was released via Napalm Records in June and on 7th December Revolver Magazine recorded their full set at Irving Plaza
Read More