A one man with guests Black Metal project, the man behind Snakeblade is Mike Redston from Vancouver, Canada. On board for his debut release are a collection of well known local musicians including Devan Howes of Kayas; Dylan Parker of Protosequence and Matthew Pancoust of Truent who each provide guitar solos. An album influenced by the fantasy of Lord of the Rings, The Witcher, Metal Gear Solid and Dungeons and Dragons, mixed by Myles Ogilvie from Diretone Music and mastered by Logan MacDonald of Logan Gordon Engineering, this album makes up half of the material he has ready to go. Ever the ambitious one, Redston doesn’t anticipate Snakeblade staying as a one-man project for long as he is looking to take this project into the live arena…

…with the influences on this album, you might expect to hear some Power Metal somewhere and you do, in the form of the lyrics. Redston’s vocals however are what turns what could be something a bit on the cheesy side into something with far more appeal to Black Metal fans. His throat shredding musings and the blast beat patterns are killer elements in “When Kingdoms Collide“, while the the riffs tear up the territory between the lines of several sub-genres. This is not Black Metal distilled to it’s purest form, there is noting raw about this 100 mph riff fest, it actually has a high production value and has something of Cradle Of Filth about it. “To The Pits With The Balrog” keeps up the high energy tempo with a ripper of a solo and it’s gang chanted vocals add an element you might not expect from the genre that work really well. “The Nine” has Redston screaming like Golum as the protagonists go in search of their prize, a mid track acoustic break and build back up to the onslaught is well worked and the kit work is particularly well refined. There is also a face melting solo on this cut from Redston himself which shows that he doesn’t necessarily need to rely on the guests for that element, he’s got all the skills and they’re on show in abundance.

An extended sinister atmospheric introduction brings in the rapid fire of “Scavenger” which sees Redston roar “I’m a scavenger, And I eat once decomposed, Feeding off waste, And I’ll tear your heart from your soul” in a frenzied guitar attack loaded with pummeling kit work. If the drums are indeed programmed then they have been programmed to perfection because normally that is something easy to decipher, but not here. Telling the tale of a Romanian Assassin and Master of the Blade “Vamp, the Impaled” is the first to see clean vocal element, albeit an off kilter one is a track that rains fire and brimstone and brings with it that fun quirky element so often lost with bands trying to be far too serious with their cryptic writings. Matthew Pancoust of Truent brings his soloing skills to a cover of his bands “Devoted To Destruction” which roars through like a banshee wail surrounded by breakneck riffage and whirlwind kit work that makes this a complete monster of a cut. There are some Blackened Thrash moments in here as well with a couple of tidy and well executed breakdowns and the end of this record is very much just the beginning… [7.5/10]

“The Kingdom” by Snakeblade is out 31st July and will be available over at bandcamp. 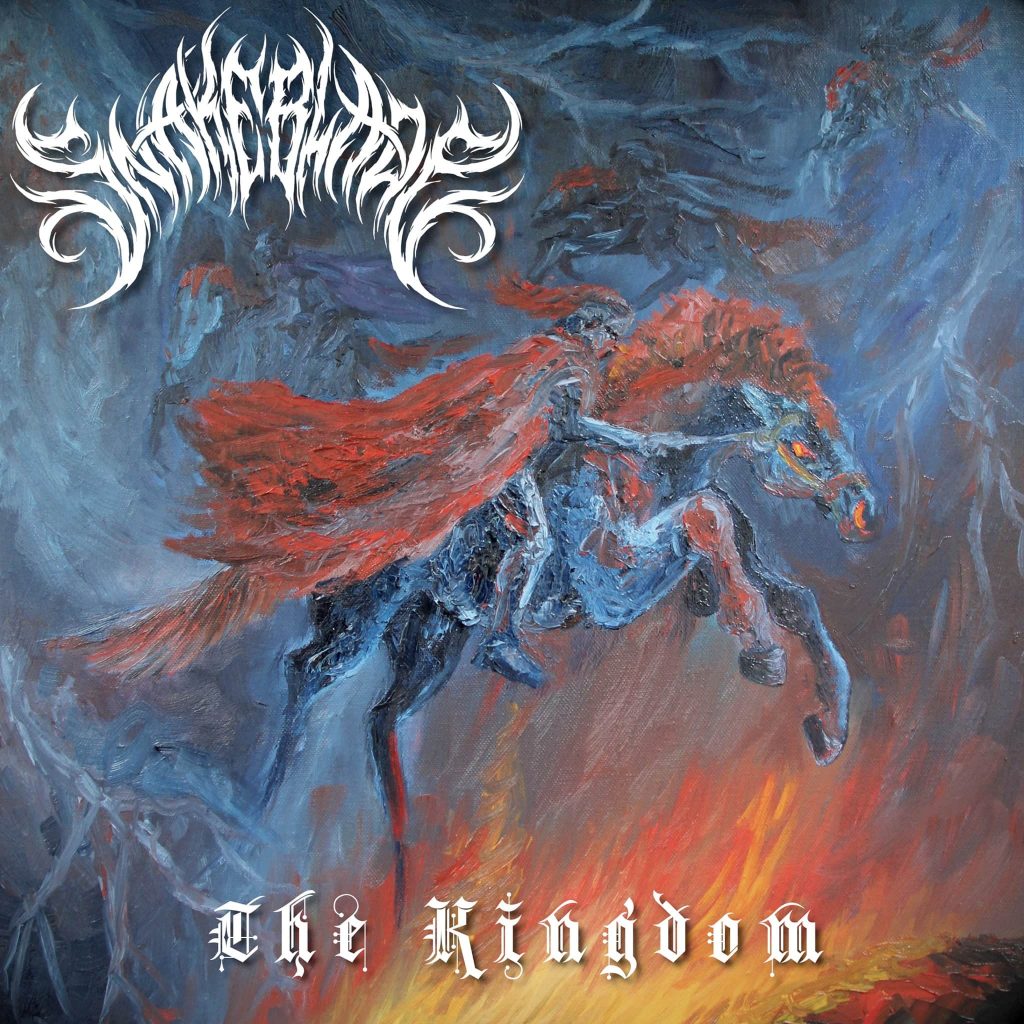