When musicians from well known projects return to their instruments and release something decades down the track in a new outfit there are always mixed emotions for long time fans. Is this new band going to be as good as the the previous one? Are they doing to damage their legacy by putting out something that we consider to be less than the high standard which they set themselves in the first place? Have they changed dramatically with age? When it comes to Sleepless, who feature in their ranks the rhythm section of Eric Detablan (Drums) and Eric Dorsett (Bass) from 80’s Death Metal act Dead Conspiracy, the answer to all of those is a resounding “NO”. They’ve  joined forces with their old friend, guitarist, singer and producer Kevin Hahn and together written Heavy Metal inspired by an internal need to slam accepted dogma and to shed light on a dark past that is largely forgotten in the style of Thrash and it’s seriously good. So we got chatting to Eric Dorsett about it and this is what he said…

How have you found the reaction to “Blood Libel” so far? The record packs a real gut punch! “We are absolutely stoked over the reaction! We had zero expectations a band out of nowhere bringing out a release during a pandemic. I feel like the reviews get where we are coming from. Sleepless is very much a niche band in that it’s less about style identification and more just what comes out in a particular emotive state of mind. It really feels good when people connect to your music on some level!!”

How long have you known your partner in crime guitarist, singer and producer Kevin Hahn (Dead Conspiracy, Poison Idea, Panzer God) and what drew you to the idea of working with him? How far back does the seed of the ideas of Sleepless go? “Kevin is one of my oldest friends. Back in high school (1980’s!) he was in the crowd that was learning MSG and Dokken tunes and I was in a punk band playing underground clubs. We gave each other a lot of shit, all in fun. I eventually had him learn a bunch of Venom, Exodus and Fate stuff to play at a party which I think gave him a better appreciation of that genre. I eventually came around and realized the genius of the music he followed. Anyhow, when Dead Conspiracy reformed, we went straight to Kevin as his Opal Studios was putting out everything from Poison Idea to award winning blues. He just produced the new Paul Gilbert album! Kevin has an ear for music, period! He’s spent decades honing his skills. Fast forward to 2020. Eric Detablan moved back to Portland after over 20 years living in other states. We immediately got to work!!!! No limits on what we would write or play. Just enjoying the creative process. Soon we had 7 songs written! We recorded them live at Opal with Kevin at the helm. One day at rehearsal, Eric said, “hey, what do you think about asking Kevin to sing?” Done!! I had been ruminating over the same idea for months. We asked and we was in!! Eric and I wrote the music for this one. I wrote the lyrics, and Kevin did all vocals and lead guitar. We co-write now and I have never found things to be a smooth and fun as they are right now. In fact, we have another band with the 3 of us called Occultista that plays NWOTHM. A much more 70’s approach. Not doom 70’s… Denim and leather style.”

What was it like playing a more Traditional Metal sound with an 80’s Thrash nostalgia for Sleepless rather than the Death Metal sound you’re known for with Dead Conspiracy? “It’s a dream come true!!!! Dead Conspiracy is tattooed on my back. I love that band deeply and hope we get back to writing soon but my style of writing has always been more on the thrash side where as Chris Carey (guitarist DC) keeps the balance with a more Death/Black approach. So, whereas it is nostalgic for sure, it is what I write every time I have ever picked up a guitar. For the next Sleepless release, the only changes we will make is to lean into a couple of the emotional directions a bit more and try to fit less riff changes per song. Since we know who our singer is now, we can write to the style more.”

What drew you to writing music that slams accepted dogma and to shed light on a dark past that is largely forgotten as a concept? “My first degree was in history and I spend quite a bit of time reading religious history. So much is absolutely disturbing. Watching history repeat itself, as is happening now with Qanon regurgitating the Blood Libel rhetoric of the Christians. It’s pure fantasy and not in the fun Conan the Barbarian way.”

As Kevin Hahn is a producer in his own right, did that make the studio side easier for getting the EP nailed down or was he more of a perfectionist? “Ha! Great question! Both! Having access to a studio with a master in control is amazing. I am co-producer and Kevin is great at listening to my thoughts about how things should sound. However… when it is my turn to record guitar or bass, he is a full on taskmaster!!!! He will sit behind me and say things like, play that bass line for the next 10 minutes until you are feeling it. Then he hits record and bang! It sounds great! I love that he pushes me to hit my potential. It’s all for the love of making great music and we couldn’t be happier.”

If you could go back to the 80’s and give your younger self any advice about writing and recording Metal and being in bands, what would you say? “Man!! At this point, I would say “dude, learn how to play everything Malcolm Young ever wrote because no matter what style you play, those fundamentals will be essential!!” I really wish I had done that earlier. Since I picked up a guitar in 1984, it was write riff, make song. I do not regret this as I never had a fear of making my own music and having people hear it. Many of my buddies played cover tunes and were so afraid to not write as well as their heroes, they just didn’t write! I do regret not having spent the time on rock fundamentals and have spend the last 5 or so years re-teaching myself.”

What are the chances of Sleepless taking to the stage together when this whole global pandemic situation is over and what does the future hold for the project? “First, thanks to Metal Noise for choosing Sleepless for an interview. It’s an honor!!!! We will be taking the stage for sure! We need a second guitarist so Kevin can be strictly a front man. As for new music, it is already underway! There are 4 songs about ready to record now. Not sure if we will do another EP or hold out for a full length. This band has been a powerful outlet for anxiety and depressive thoughts. It is therapeutic and will continue smashing through dogma and pounding out crushing metal!!!!”

“Blood Libel” by Sleepless is out now via Necromantic Press Records 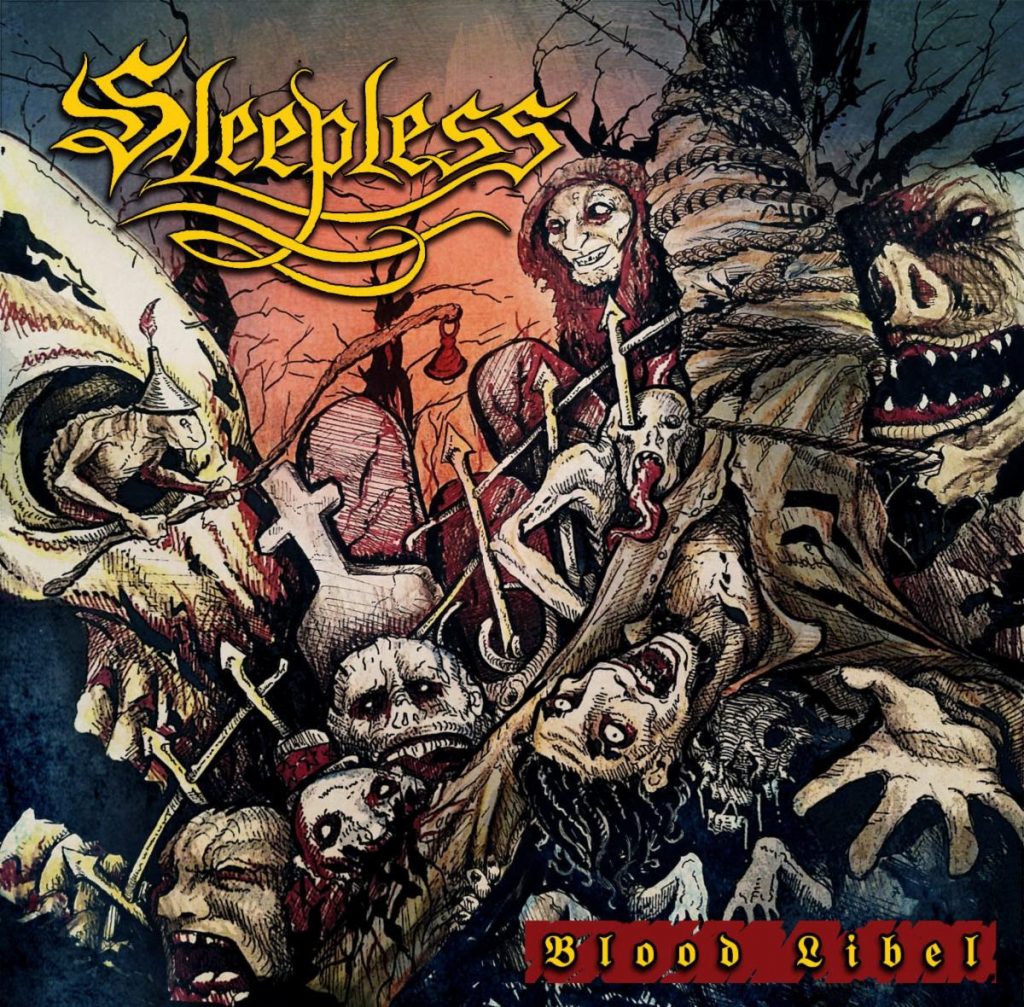