It has been a hard road out of hell for Thrash Metal quintet Primal Creation, who found a stable line up in 2014 before releasing their politically charged debut album “Demockracy” in 2017. Met with rave reviews it opened the door of opportunity and allowed them opening slots for both Skeletonwitch and D.R.I in 2018 before they won the Belgian Wacken Metal Battle Finals and had the honour of playing the 30th edition of the legendary Wacken Open Air in 2019. However 2020 got off to bad start with vocalist Koen Mattheeuws breaking his hip before the Global Pandemic happened however despite the setbacks, the band, who are rounded out by Clint Dusslier (drums and percussion), Ewoud Herregat (bass) alongside guitarist duo Ruben Dhaene and Cédric Uyttendaele managed to record their sophomore album. Given the title “News Feed” it was recorded and mixed throughout 2020 by Francis Snebbout (Devastatiön, Old Ivy, Sky In Motion) at Oakwood Recording Studio, Kaprijke Belgium before being mastered by Alan Douches (Gatecreeper, Converge, Devildriver) at West West Side Music in New York.

Riding on the traditional Thrash theme of paranoia “Extremely Dangerous” serves as an introduction piece that warns of fake news stories circulating on the internet that could serve as being dangerous to democracy though the medium of warped news clips that inject a sense of impending doom before “A Post-truth Order” rises up to take its place. Oppressive and dark it serves as something of a showcase as while Primal Creation are a Thrash act, they are not one with an 80’s nostalgia about them, instead creating something that blends together elements of Thrash, Metalcore and Melodic Death Metal in a witches cauldron. So after the rampaging gallop of the first half that is soaked in the more traditional fist in the air gang chants and echoed out spoken word moments as Mattheeuws cries for justice, the tail end sees something of a more gloomy approach. The drum sound is crisp and clean and the album benefits from the high caliber of those behind the boards as with no frills, gimmicks or guests, everything has to be on point, there are no hiding places. Perhaps owing something to 2003 era Metalcore bands like Darkest Hour, “Please Disperse” is clever creation. Blending spoken word, shout and death growled vocal moments with well executed tempo changes, it perhaps lacks some of the edge that a Death Metal act might inject into it but otherwise it comes off to dark perfection. The first single from the album was “Vial Play” which has a distinctive Thrash Metal orientation with a couple of brilliant solos as the caustic vocals separate skin from bone in places, something which fans of the current Crossover Thrash resurgence acts like Enforced and Angelus Apatrida will run to the pit for. “Antillectual Disease” is a bit more old school guitars wise, violent vocals and chunky bass lines making way for a classic whammy bar solo. Some may find it over long but listen closely and you’ll notice nuances that keep the monotony at bay.

If there was an opportunity for the Belgian accent to creep into one of the songs of “News Feed” then it would be during one of the spoken word lines of “Follow The Reader“, a mid-tempo Thrash Groove track with some haunting lead moments in the mid-section but in truth, you would struggle to tell where Primal Creation hail from on this evidence alone. That can be a double edged sword as often accenting or a cut in a bands native tongue adds charm but here there are no hiding places, it’s go hard or go home. An anvil solid rhythmic foundation gives “Watch It Burn” some more Metalcore isms that help it sound fresher while the return of the news samples from the introduction help create a mid-track segment of atmosphere which the band have clearly worked hard on. You can picture the news feed on big screens beside the band as they play Waken before breaking out to pyro-technics and the solo into breakdown that finish off the track with style. As an album, “News Feed” is essentially a concept affair that builds on all that you might have heard in the land of conspiracy that circulates the internet where two and two make five and the truth behind a lot of social media is not reality. That is borne out in “Lie-Share-Subscribe” which links a series of mosh pit worthy breakdowns with tight rhythms of mid-tempo bludgeoning while Mattheeuws roars like a caged beast. Saving the best until last “The Daily Noose” builds up with an elongated introduction before putting the hammer down for an all out riff fest of fist pumping attitude for a storming conclusion with its rampaging Power Trip esq whammy bar solo finish being absolutely divine. [7.5/10]

“News Feed” by Primal Creation will be released on 16th April with pre-orders available over at bandcamp. 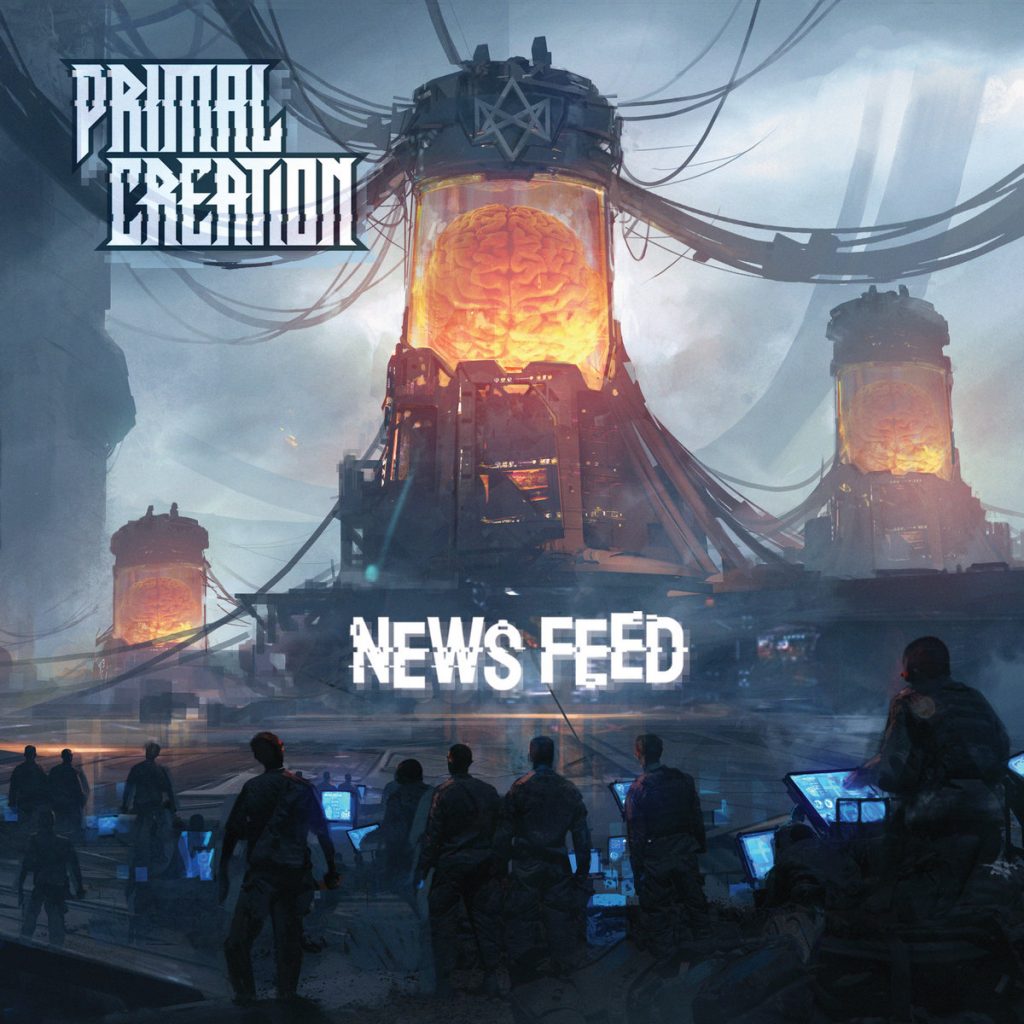