Skip to content
HomeReviewReview: “Titanomachy” by Tides Of Kharon

In 2017 the independent release of the debut album “Coins Upon Our Eyes” from Tides Of Kharon birthed the Edmonton Canadian quartet into the World of Melodic Death Metal with lyrical inspirations from ancient Greek mythology while citing influences from Amon Amarth, Ensiferum and Children of Bodom. Four years later and the band have taken things one step further with a concept EP in “Titanomachy” that dedicates itself to a decade-long battle; a battle to determine the rulers of the future and to in working towards their vision, the band have done everything in house with guitarist Mike Burton handling the final mix and master at Silent Line Studios after each musician engineered their own parts at separate studios.

Tides Of Kharon maybe a Canadian band but their interpretation of the Melodic Death Metal genre is very much a European one and the heaviest instrument in the bands arsenal is the voice of Garrett Nelson, something which becomes apparent as “Atlas Endures” plays out. An uncompromising vocalist, his forte is the unclean and despite some of the rousing melodies and soaring leads with Power Metal influences he sticks to task, unflinching in the eyes of those who may wish for him to break into a clean passage. The result is something that chills to the bone as Nelson simply tramples the naysayers in to the dust, his clenched fist raised aloft in triumphant rhetoric. In Greek mythology, the “Titanomachy” was a ten-year series of battles fought in Thessaly, as the Titans an older generation of gods, based on Mount Othrys fought against the Olympians, a younger generation who reign on Mount Olympus. The war was fought to decide which generation of gods would have dominion over the universe; it ended in victory for the Olympian Gods. In the eyes of Tides Of Kharon that war plays out in less than five minutes during the title track, an epic adventure that would suit Power Metal very well but instead gives the opportunity to guitarist Mike Burton to explore with some captivating leads played over the top of pulsating rhythmic battery that makes for a refreshing way for these tales to be told. If you can imagine Lamb Of God playing “The Caitiff Choir” by It Dies Today then you might have an inkling as to what Tides Of Kharon have created and the gallop of “Sentinels of Stone” is very much that of the Gothenburg Sound that influenced 2003 era Metalcore with the bludgeoning voice of Nelson being very much God like. “Kronos Descends” references the King of the Titanes and the God of time, considered a destructive and all-devouring force and as Nelson tells the tale surrounded in majesty and shrouded in darkness, the ability to hear his vocal lines becomes important and fortunately that is something we can do as they are just about clean enough for that, though it has to be said that some of those poets that wrote of the ancients may reel in horror about their stories being told in this way. Closing with a swashbuckling dark rampage in “From The Mountain” sees Tides Of Kharon echo the flamboyance of their earlier majestic displays while also throwing in the odd curve ball with drummer Gord Alexander producing some bursts of blast beasts as the band leap between sub-genres with death defying dexterity [7.5/10] 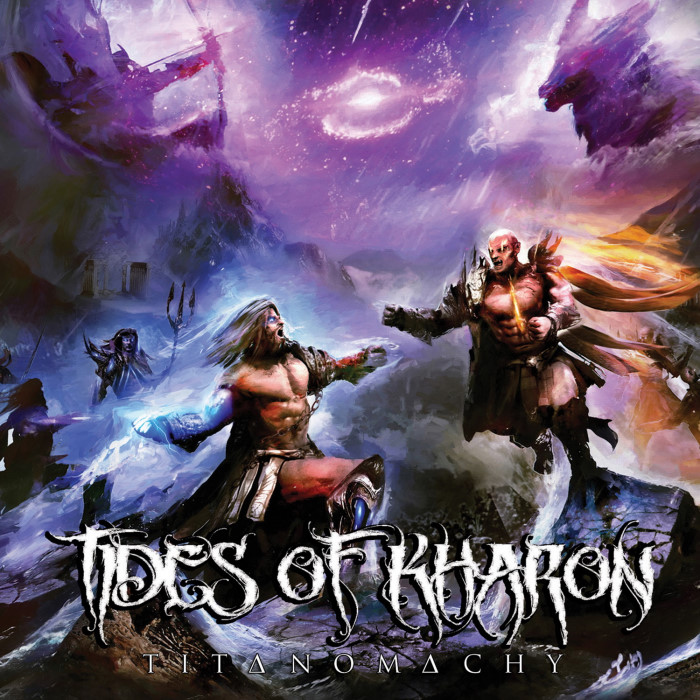 Tags:Coins Upon Our Eyes, Sliptrick Records, Tides Of Kharon, Titanomachy