Skip to content
HomeReviewReview: “End Of The Line” by Against Evil

The 7 year Metal assault which lead to “End Of The Line” from Against Evil began in 2014 in the city of Visakhapatnam, India where Siri (Vocals, Bass Guitar), Shasank (Lead Guitar), Sravan (Vocals, Rhythm Guitar) and Noble John (Drums) began work on their alchemy, their objective to combine the trinity of Traditional Heavy Metal, Power Metal and Speed Metal into a single entity. The result of that work so far has been a pair of critically acclaimed albums, “Fatal Assault” in 2015 and “All Hail the King” in 2018 with the band able to wage war on Europe with the help of German/Swiss-based record label Doc Gator Records and a crowdfunded European tour in the summer of 2019. That saw them performing club and festival shows in Germany, Austria, Belgium and Switzerland while sharing stages with the likes of Queensryche, Riot V and Hardline. So Against Evil have set themselves a high bar for their third studio record and have turned to Simone Mularoni at Domination Studio (Damned Spring Fragrantia, Aguzzi, Across The Swarm) to mixed and master having written, produced and recorded themselves as they did with “All Hail the King”.

Opening with a cut about a Gladiators fight for freedom and survival in “The Sound of Violence” sees the Power Metal element lyrically accompanied by Trivium esq guitar work and galloping drums with a fist pumping attitude that picks up and continues where their last record left off. That flows into “Speed Demon” which is more Traditional Metal with a Face Melter of a solo, both being heavier and a little more in your face than the bands previous works. That stops with “Out for Blood” which sees the band joined by Billy Sheehan as the band sound like a mid-career Megadeath, while also laying down a ripper of an extended solo. It’s easy to see why the band have been so successful and why they will continue to be; they have a sound that is more or less timeless, Siri is a great storyteller and his vocals have minimal accenting, so the band have very broad appeal. The only place that the accenting is noticeable is on the spoken word that leads into the title track and even then, its hard to place as Indian. Siri’s vocals are harsh sung rather than being unclean, which makes all the phrasing easy to hear and each song has an epic anthemic quality that should really fill arenas and be accompanied by pyro; you may struggle not to sing along after a couple of spins. The sound quality is second to none especially considering there is no reference to a studio being used, there has clearly been a lot of time and effort spent getting things the way the band want them to be and the mixing and mastering job is also fantastic. “Sword of Power” re-tells the story of Excalibur, the legendary sword of King Arthur and sees Siri play the role of the protagonist who removed the sword from the stone and fights the crusade; it’s particularly slick and well constructed and sees the band as a beast at their prime. A tribute to those who helped them on their crowd funded tour, “Metal or Nothin’” is the ultimate call to arms for Metal Heads to unite and takes all the elements which the band have put into the album into one song, both catchy and a cliché but really good fun none the less [7.5/10]

“End Of The Line” by Against Evil is out 14th May 2021 via Doc Gator Records with pre-orders available over at bandcamp. 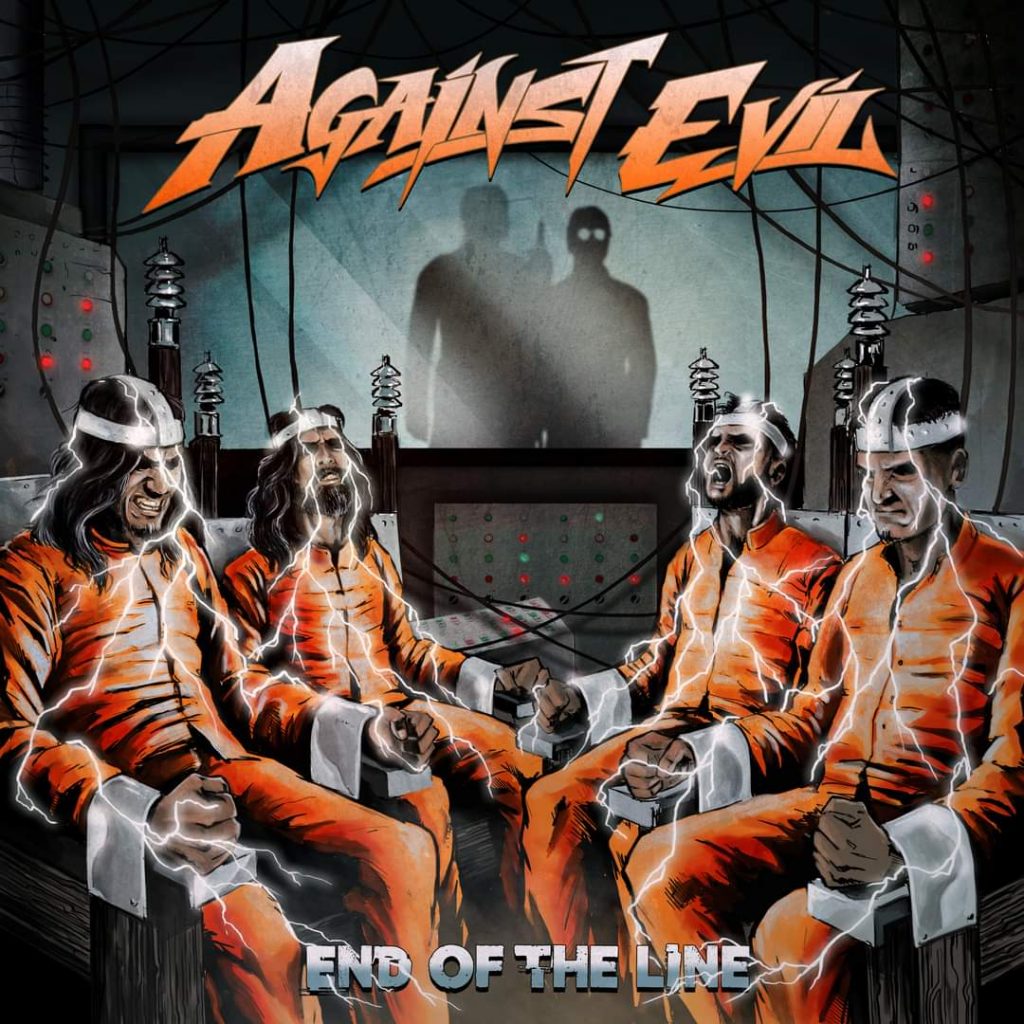