Skip to content
HomeReviewReview: “In The Throes” by Whipworm

What started as a solo project by Los Angeles California based multi instrumentalist Travis Weinand (Titan, Burden, Tetsuo) became more than the sum of its parts when he was joined by drummer Dave Ferrara (ex-Cemetery) and the pair were able to re-animate some of Weinand’s deadliest dreams. Inspired by a plethora of Death Thrash acts that circled their minds like vultures, they have taken what they needed from those carcasses to create their own diverse World in their morbid vision and with this being their third EP since June 2020 debut “Swarm” they are showing no sign of slowing their juggernaut down…

…A change in cover art style doesn’t signal a style shift for Whipworm but instead suggests something of a concept beneath the surface of “In The Throes” with a hammer horror comic book aesthetic that might be closer to something you’d expect from someone like Wednesday 13. Instead this is a vicious blend of razor sharp Speed Metal riffs that sits perfectly in a Bermuda Triangle between Death and Thrash Metal. Opening ripper “Legion” spelling out what the duo are all about in no uncertain terms, lyrically depicting the transition from human to legion in an interesting twist on science fiction that fits the aesthetic while laying down the gauntlet with some face melting leads and solo work. After that abomination, “Awakening” shifts and contorts into something with more Thrash groove to it as staccato riffage breaks like the stormy seas over the shoreline over a tale that treads a similar path to “Sweating Bullets” by Megadeth, giving in to the beast within like a split personality sufferer and going on the rampage. Weiland’s raspy vocal style is ideally suited to this kind of first person told narrative, giving the impression of that inner voice taking control and carrying out the evil deeds; it’s not until “Fear” that there is a change to that with both lower gutturals and a cleaner contrasting tone facing off against each other like duelling enemies. It’s an experiment that pays off handsomely alongside the sinister and brooding guitar work and elevates things to a new realm of existence; there is little doubt that had this pair been around during the height of the bay area scene then they would have gained more notoriety. “Oracle” continues the experiment vocally with some ethereal cleans as Legion seeks the Oracle while progressive vibes begin to creep in; the forces of good and evil doing battle over some thunderbolt like lead work to provide something of a small scale Death Thrash Metal Opera. It’s not taken to the extremes that it could be and that’s a good thing in the context of the record as it remains a solid punch in the face bejewelled by those entrancing siren calls as opposed to something from the Devin Townsend playbook. The pair’s take on “Where The Slime Live” is a classically brutal brooding affair that benefits from the modern production but remains crunchy and satisfying while extending the original instrumentation. It’s a dark new day for Whipworm [7.5/10]

“In The Throes” by Whipworm is out now and available over at bandcamp. 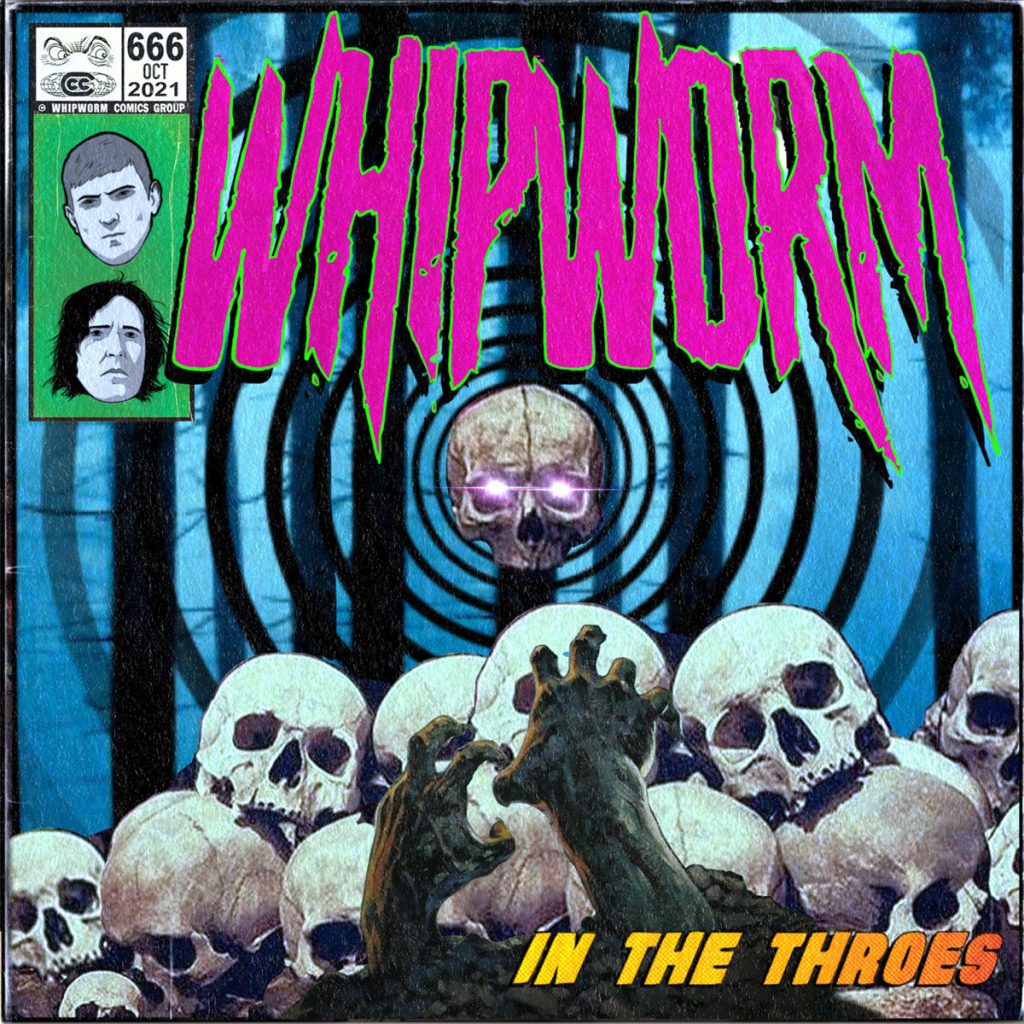