Adorned by the artwork of Alexandre Goulet, “Rain City” is the the follow up to the critically acclaimed 2019 debut album “River Of Lies” from Manchester Crossover Thrash act Guilt Trip, a band with a reputation for a fierce live show and the ability to hold there own on stages with everyone from Judiciary to Stick To Your Guns not only in this country but in France and Germany as well. It seems strange that this is the bands first self release after stepping away from BDHW Records but vocalist Jay Valentine, drummer Tom Aimson, bassist Bradley Hall and guitarist duo Jak Maden and Nick Clark are ready for war again…

…treading a similar path to their friends in  Sheffield Shredders Malevolence, “All I Hate” spin kicks things off with straight up Crossover Hardcore bounce and pure cathartic vent from Valentine, the dive bomb whammy bar action giving it that sheen as breakdowns begin to pile up while the pick slide never fails to raise the hairs on the back of the neck. The barrage of mosh pit friendly riffs keeps coming with single “Fraction Of Time” as Valentine talks about the red mist descending with classic crossover vocal tones, the gut punch of the unclean backing vocals on this one giving it more edge. The melodic break is an intriguing moment, it adds a meloncholic touch with an 80s Thrash nostalgia before the punch back, giving it that much more weight and gravitas although making it work live may require a little more showmanship than it does on the record. Mid record cut “Emerald Gate” is the first to have a solo proper, the band sounding as fierce as ever with this one having more of a storytelling vibe. Then comes the risk with the title track “Rain City“, aching clean vocals against a backdrop of pouring rain, mournful guitar work and an echoing programmed drum sound. It’s the moment of clarity one might find at the bottom of a bottle of whiskey at 2am reminiscing over some of those moments in life that haven’t gone according to plan, a left field move that is executed to perfection and confirms there is more to Guilt Trip than meets the eye. The Biohazard inspired riffs return for the savage “Split Reflection” but with a twist in the tale as Valentine does clean choruses and between his violent verses. Fortunately the band are able to carry them perfectly without slowing down their sonic onslaught or compromising on their clenched fist mentality and were simply left wanting more because 21 minutes simply isn’t enough [8/10]

“Rain City” from Guilt Trip is out now 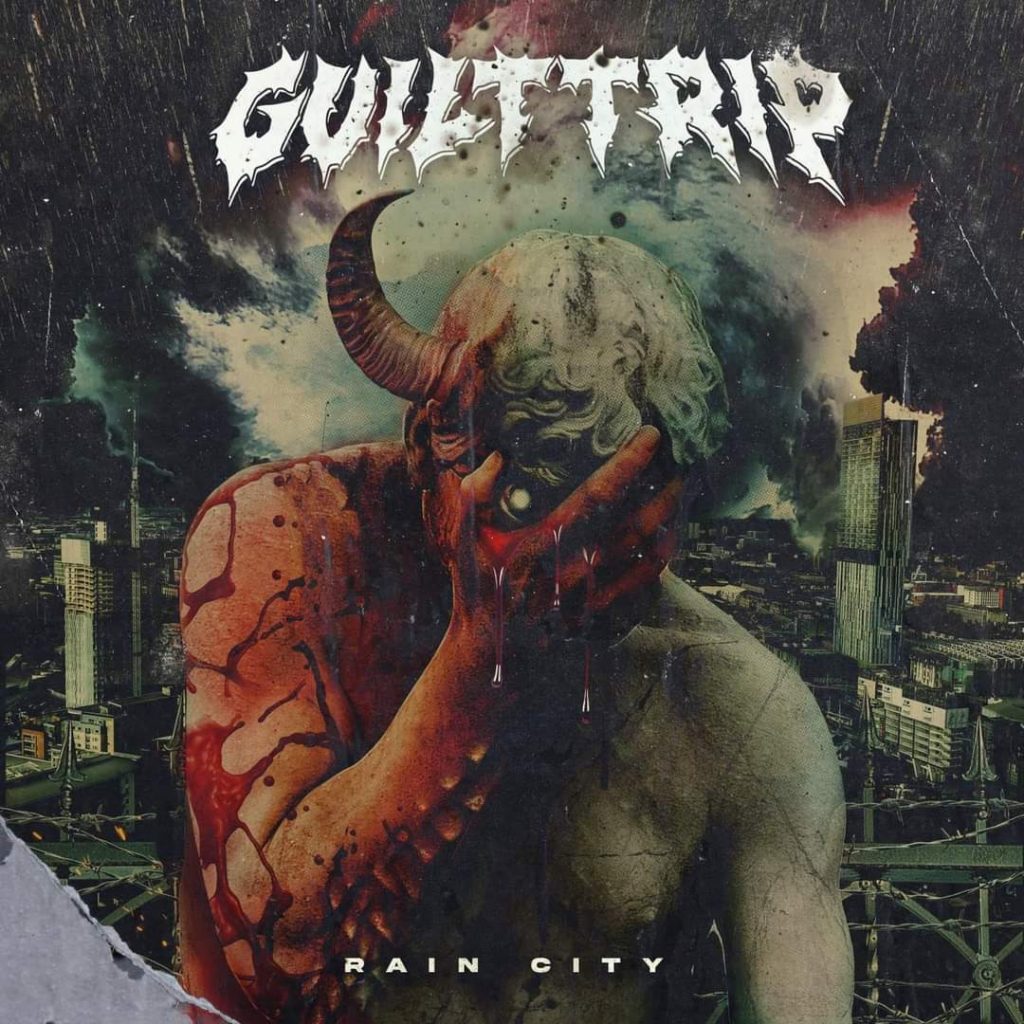