They say that time flies when you’re having fun and to be fair that is exactly what it’s like watching Oxford Blackened Death Metallers Promethean Reign during one of their live shows. They re-emerged after the apocalypse in November at Rabidfest after impressive new single “Eat The Rich” they’re celebrating the 5th Anniversary of their debut EP “Aftó Eínai Pólemos“. So after we reviewed it, speaking to guitarist Jon Arnold and vocalist and bassist TJ Higgs seemed like the next logical step…

How did it feel to go into the studio to record the EP after 3 years of releasing just a handful of demos? Did you feel like there was a certain pressure due to how long it had been without something out there?

Jon: “No, I wouldn’t say we felt any pressure. At that point, we hadn’t played many shows and the band had no commitments. We had a few members come and go over the years which always holds plans back. I put together a concept demo of tracks on my pc with programmed drums in 2015 and we just persisted with those songs.

Back then Tj was originally on guitar, Eventually, it worked out for him to play bass, and the vocal duties came about from our lack of finding a vocalist we all liked”

Five years down the track from the release of your debut EP, how do you feel about those songs now?

Jon: “The songs are still good for their age, although I’d say the ep was still a rough form of the tracks. We still play Titanomacky and The Great Deceiver live. The remaining songs don’t really fit within our current vision, so they are probably not going to be played live again at all, or for a very very long time”

If you listen to it back now are there any parts in hindsight you would change? How much of that was behind the decision to re-record “The Great Deceiver” as the double A side for your recent single “Eat The Rich“?

Again, the e.p was never a planned experience. I actually just wanted to go in and record our songs in demo format, as it was about the only way at the time we could really get a clear recording of them.

One thing led to another and before we knew it, we went quite deep into the production and the budget we had allocated. We made the choice to add extra effort and put the songs out on a limited release. We printed 100 CDs, all of which sold within 6 months of release.

The re-recording of The Great was basically to give people a taste of how we may have changed from our e.p over the past 5years. Other than that, it just came out as a really nice version of the track, so we added it to the “Eat The Rich” single”

What are your memories of recording at Shaken Oak Studios with Arthur Young, what was the experience like?

Jon: “We didn’t plan for so much mixing of the tracks, thus giving us some problems when we came to do the final mix, there were definitely a couple of heated disagreements. But mostly it was a positive vibe, it was the first time we had ever heard our tracks so clearly, after years of shitty recordings from practice rooms. All in all, it was a great experience for us as a band”

In a previous interview with us, you mentioned realizing the error of your ways in choosing “Aftó Eínai Pólemos” (Greek for “This Is War”) as the title for the EP due to people not being able to pronounce it; what made you choose it in the first place?

TJ: “We were leaning heavily into the Greek mythology themes and wanted to continue that through our use of language in the title”

In our review we’ve mentioned the EP sounding raw and yet that being part of its charm; was that always the intention?

Jon: “100%, it was basically a demo session that ended up being pushed to e.p status, we had a super tight budget but it came out OK”

The EP has a few particularly theatrical performances on the record vocally with a nasty brutal bowel clenching Death Metal growl on the finale “Burn“. How does what you do vocally does now differ from what you did then in terms of vocal warm-ups and maintaining vocal abilities?

TJ: “I’ve worked on developing my low and mid-range growls, improving my technique so I can do them more safely. This means I can keep growling for longer! I’ve never done much in terms of warm-ups, I just make sure I stay hydrated”

You’ve self described as a Blackened Death Metal band with a love of bands like Satyricon, something which is evident in cuts like “Titanomachy“, which has bursts of blast beats and some more typical Black Metal riffs. How do you go about getting the balance in the force between those elements without allowing one style to overpower the other?

Jon: “I actually don’t listen to much Satyricon myself so it’s interesting for me to hear these comparisons as I can’t say I make a conscious decision to make any part of something in a song a particular thing. I just want something I consider to be reflective of what I’m feeling there and then for the song. I like to get a loose idea of a riff or track it down. Maybe ill get that gut feeling that it’s a winner, send it to the rest of the guys and get some Input or abuse…”

Missed out? “Aftó Eínai Pólemos” by Promethean Reign is out now and available over at bandcamp 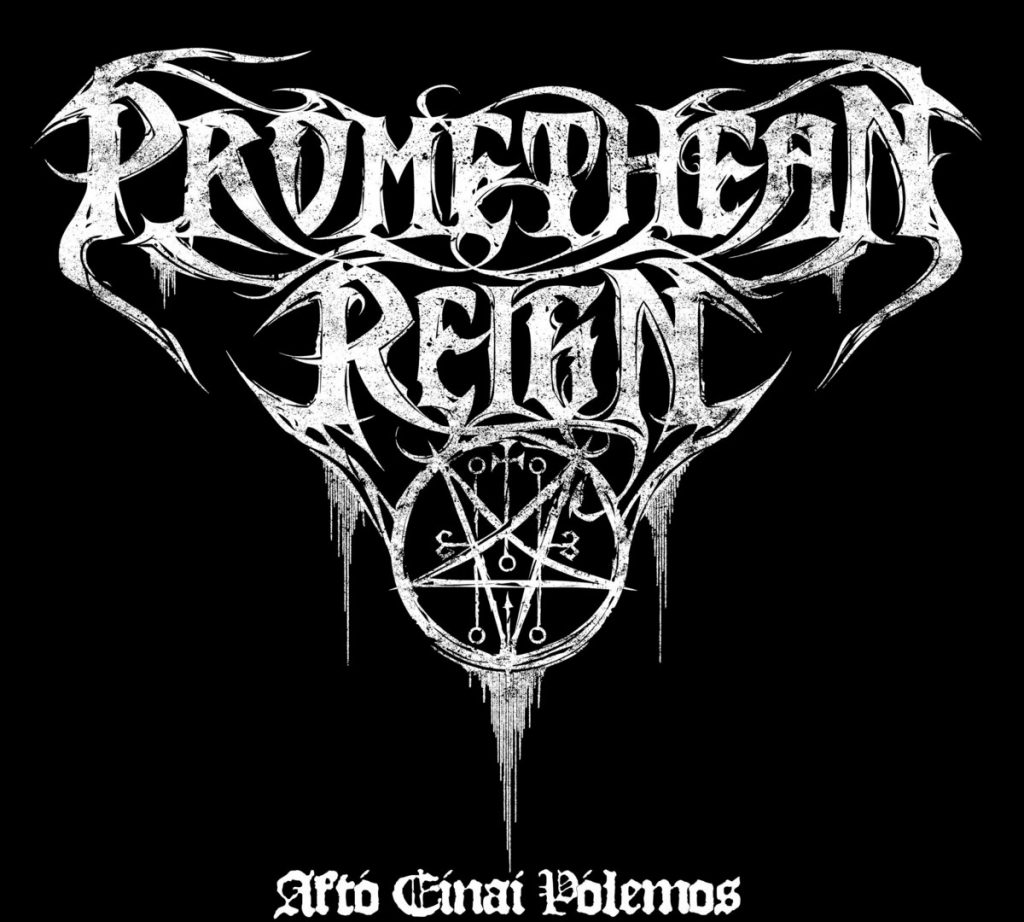